Astronauts Test a Moon Stretcher on the Seafloor 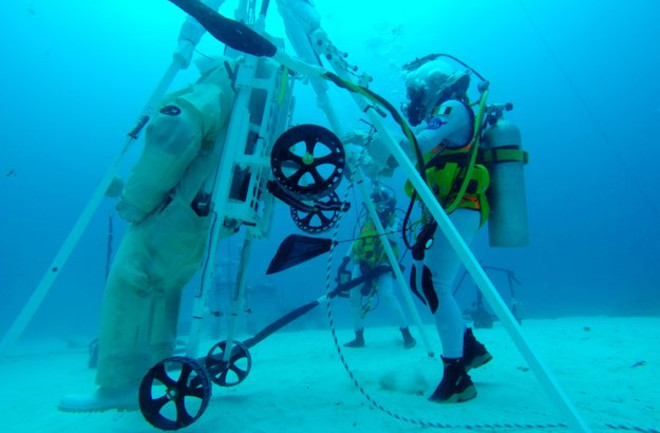 NEEMO 23 crew members test out a prototype of the LESA device. (Credit: ESA/NASA)

This week, astronauts and scientists are venturing under the sea as part of NEEMO-23, the 23rd expedition of the NASA’s Extreme Environment Mission Operations. NEEMO sends specialists to Aquarius, an underwater research station located 3.5 miles off the coast of Key Largo in Florida, and 62 feet under the surface.

Thanks to the buoyancy of seawater and the sandy seafloor, the area around Aquarius is a pretty good simulation of what it’s like to walk on the moon. So scientists will be testing new tools and instruments intended for future use on the moon, for everything from extracting core samples from rocks to rescuing incapacitated crewmates.

The team arrived June 13, and will remain there for nine days. Among other scientists, the group includes European Space Agency astronaut Samantha Cristoforetti as commander, and NASA astronaut candidate Jessica Watkins.

Among the tools being tested this week is a piece of rescue equipment designed by ESA. Called the Lunar Evacuation System Assembly (LESA), it’s a device that can lift an incapacitated astronaut onto a mobile stretcher and carry them to safety.

Even though the moon’s gravity is less than Earth’s, making people weigh less, the weight and clumsiness of the suits astronauts wear for Extravehicular Activities (EVAs) remain a problem when lifting and handling many objects – including other astronauts. During a study called Moondive, ESA selected rescuing a downed crewmate as a potential activity astronauts might find difficult.

To solve that problem, they created LESA. Designed to be operated by astronauts wearing bulky EVA suits, the device can be rolled close to the downed astronaut – a dummy for this week’s tests. It then unfolds into a pyramid shape that can lift the astronaut off the ground, rather than relying on human lifting power, as a normal stretcher does. The helper astronaut then attaches the stretcher to the downed astronaut’s back, and can then wheel them away, much like a normal stretcher.

LESA was first tested in 2017 on a previous NEEMO expedition. This is the updated version.

With NASA making big plans for a return to the moon in the near future, there will only be more opportunities for lunar safety equipment, and devices that humans can use in space environments both on and off-world.