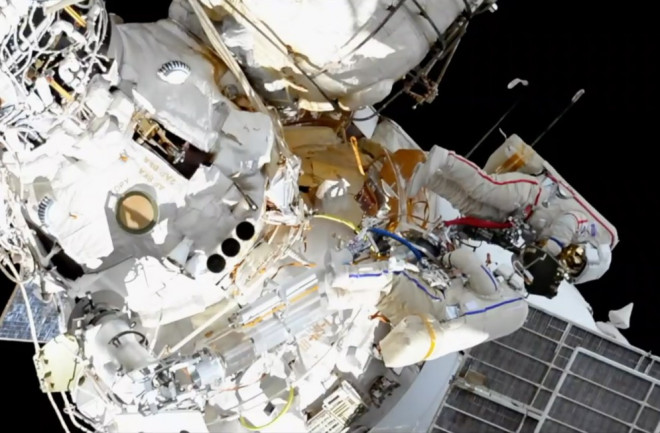 Russian astronauts Oleg Kononenko and Sergey Prokopyev help investigate the cause of a hole on the Soyuz spacecraft. (Credit: NASA)

On Tuesday, two Russian cosmonauts spent seven hours and 45 minutes on a spacewalk, working to solve the mystery of who or what poked a hole in the Soyuz spacecraft. The cosmonauts used knives and other tools to cut a 10-inch chunk out of the International Space Station. It will be brought back to Earth and investigated for clues to the cause of a small hole in the Soyuz capsule.

Back in August, astronauts noticed a slight drop in pressure on the International Space Station. While not an immediate risk, they investigated and found a hole on the inside of the Soyuz habitation module, which is currently docked at the space station. Astronauts Sergey Prokopyev and Alexander Gerst repaired the 0.07-inch-wide (2 millimeters) hole with material soaked in an epoxy sealant. Pressure quickly returned to normal aboard the space station, and the patch job has held since then.

But as they’ve investigated the hole in the Soyuz capsule, astronauts can’t figure out what created it. At first, it was thought that a micrometeorite may have collided with the craft. But Russian officials stated a few days after the hole was discovered that, based on its shape, it looked to have been drilled. This led to speculation that perhaps someone purposefully created the hole, sparking rumors of sabotage.

“It was done by a human hand. There are traces of a drill sliding along the surface. We don’t reject any theories,” Dmitry Rogozin, the head of Russian space agency Roscosmos told the state news agency TASS.

Beginning at about 11 a.m. EST, cosmonauts Oleg Kononenko and Sergey Prokopyev started what was supposed to be a six-hour-long spacewalk to examine the external hull of the Soyuz MS-09 spacecraft, which is used to transport astronauts to and from Earth. It was the eighth spacewalk this year.

Their goal was to collect samples of any residue found on the habitation module’s hull. To do so, they had to cut a 10-inch (25 centimeters) sample of the the thermal insulation and debris shield on the hull. They also collected images and video to aid the investigation. Then the cosmonauts had to place a new thermal blanket over the hole to ensure it is fully sealed. The task wasn’t easy.

The samples, data and photographs taken from the leak site will be brought back to Earth and analyzed by Russian specialists. They hope that the evidence collected during this spacewalk will finally solve the mystery of what created the hole.

The Soyuz spacecraft will be used to return astronauts Sergey Prokopyev, Alexander Gerst, and Serena Auñón-Chancellor to Earth in eight days.