After spending nearly a full year in space, scientists will use Koch’s mission to study how microgravity affects women. 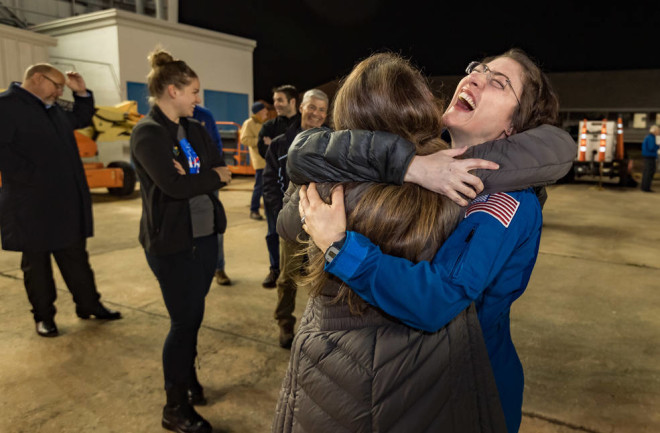 Most humans will spend every moment of their lives on Earth. The closest we get to leaving our home planet is jumping in a plane and flying mere thousands of feet above the surface.

Meanwhile, NASA astronaut Christina Koch just stepped back onto the planet after 328 days on the International Space Station, breaking the record for longest continual spaceflight for a woman during her ISS residency.

“After 328 days in space, the first six days back on Earth were full of just as much wonder and excitement,” Koch said in a press conference Thursday.

Koch landed in Kazakhstan on Feb. 6 with European Space Agency astronaut Luca Parmitano and Russian cosmonaut Alexader Skvortskov. During her time on the ISS, Koch participated in a number of experiments, and even took time to answer a few questions from Earth. But perhaps one of Koch's most most important contributions was that she herself was the subject of study while in space.

As NASA gears up for the next generation of lunar and, eventually, Mars-bound missions, studying how microgravity affects the body will be crucial as longer spaceflights become the norm.

From previous research on astronauts, scientists know that microgravity affects our bodies in different ways. For example, research released in 2018 showed that extended stays in space can cause farsightedness and swelling of the optic nerve. But how much any one person is affected varies, due in part to their weight.

Luckily for Koch, her journey back to Earth hasn't included any major health concerns so far.

“I feel great,” Koch said about six days after her return to Earth. She mentioned her balance was off for a little while and that some of her muscles ached, but that’s to be expected upon returning to Earth’s gravity. But overall, she described it as a “pretty easy transition back.”

But this doesn't happen to everyone. In 2016, NASA astronaut Scott Kelly returned to Earth after 340 days on the ISS. When he first came back, he frequently talked about how he had issues with swollen legs and walking.

Scott, along with his identical twin, retired astronaut Mark Kelly, were the subjects of a study as Scott spent a year in space and Mark continued living on Earth. Because of their nearly identical genes, the twins were perfectly suited for a study about the effects of microgravity.

When Scott Kelly came back from his year in space in 2016, he was 2 inches taller than when he left, a common effect of living in freefall for extended periods of time. Scientists also found microgravity can damage DNA, thicken artery walls and change the microbiome from their research on the Kelly brothers.

Research and scientific details about how the near-year of microgravity affected Koch are not yet available, but NASA intends to use her extended stay as a way to observe whether prolonged spaceflight will affect women differently than their male counterparts.

In the upcoming Artemis missions, NASA will be sending the first woman and next man to the moon. Extended missions to the planned lunar orbiting space station, Gateway, will see both male and female astronauts in space for longer periods of time, and comprehensive studies of both men and women in microgravity situations will be critical for future exploration.

For now, Koch seems to be enjoying her time back on Spaceship Earth. She revealed during the press conference that she was excited to see her dog, a rescue she calls LBD, or “Little Brown Dog.” She’s also taken a trip to the beach with her family and friends.

This time, when she saw the ocean, she wasn’t floating above it 200 miles away in space.