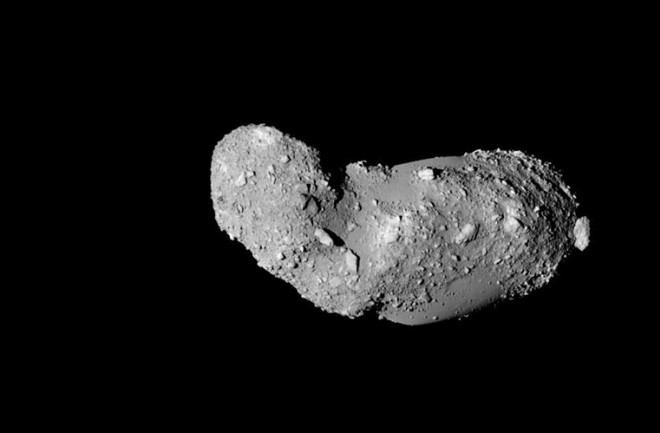 The Japanese Space Agency, JAXA, reached asteroid Itokawa in 2005 and returned a sample to Earth in 2010. (Credit: JAXA) In 2010, a Japanese mission called Hayabusa returned to Earth from a seven-year space journey. It brought back not only images and data from its adventure, but also actual samples, small grains of rock from its target, the asteroid Itokawa. Just a handful of space missions have ever returned to Earth at all, let alone brought back pieces of their destinations. So Hayabusa’s samples are highly prized, and have been studied by many teams across the world. Now, researchers from Arizona State University have analyzed a tiny subset of Hayabusa’s collection, and they've uncovered a surprising amount of water contained within the rock grains. The finding puts stony asteroids like Itokawa back in the spotlight, reigniting a long-standing debate among scientists over where Earth’s vast oceans come from. Did the water originate from comets, asteroids, or some other source altogether?

A dust grain from asteroid Itokawa that was studied as part of an earlier analysis. (Credit: ESA)

Water From A Grain of Dust

Researchers Ziliang Jin and Maitrayee Bose got just five grains from Hayabusa, each spanning a mere half the width of a human hair. Two of those five particles contained the mineral pyroxene, which on Earth often contains water. So, the pair used an instrument called a mass spectrometer to see how much water there was in Itokawa’s pyroxene. What they found surprised them. Not only were Itokawa’s grains rich in water, but the chemistry of that water very closely matches the water on Earth. They published their results May 1 in the journal Science Advances. For decades, scientists have wondered where Earth got all its water. Did Earth form with its water baked in, or was it delivered later by a cosmic hailstorm of comets or asteroids? If so, which? The evidence has tipped back and forth over the years. Much of the uncertainty is because scientists have very few physical samples to study. And not all water is created equal. Most water contains one atom of oxygen and two atoms of hydrogen: H2O. But some water contains deuterium instead of conventional hydrogen. It's a heavier version of hydrogen that has an extra neutron at the center. When scientists find the source of Earth’s water, they expect it will match the fraction of deuterium that scientists observe in Earth’s oceans today. But measuring that is tricky to do without physical samples like those from Itokawa.

Researchers analyzed tiny particles from asteroid Itokawa to make their finding about its watery makeup. (Credit: M. Bose) Itokawa is just one asteroid. But it comes from a population of space rocks that orbit between one-third and three times Earth’s orbit, meaning they’re local. There are many asteroids like Itokawa that could have impacted Earth long ago. But of course, the samples that Hayabusa plucked from Itokawa’s surface in 2005 have been through a lot in the eons since Earth gained its water. So Jin and Bose had to run the clock backward, accounting for the heating, weathering, and collisions that Itokawa would have endured since the early days of the solar system. What they found is that Itokawa and rocks like it could have delivered half of Earth’s water reservoirs. And since they come from the same region of the solar system as Earth itself, the researchers conclude that our planet could have nabbed the rest of its water as it was forming, from the materials around it. The argument over Earth’s watery origins will likely continue. But Hayabusa’s successor, Hayabusa2, is currently in orbit around another asteroid, Ryugu, and a NASA mission called OSIRIS-REx is exploring Bennu. Both missions will bring home their own asteroid samples and add to the conflicting but always growing mound of evidence about the origin of Earth’s oceans.