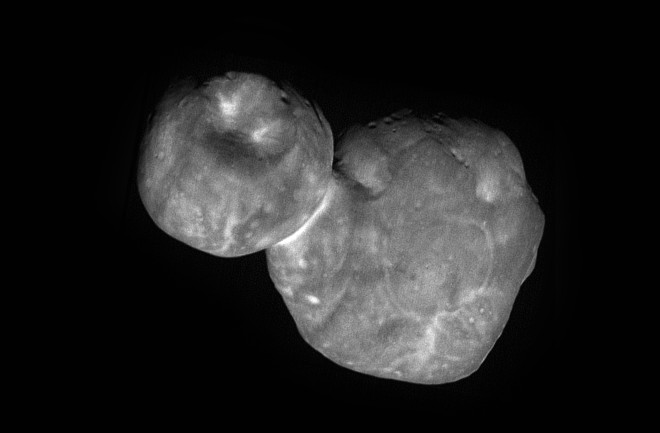 On New Year’s Day 2019, the far-flung New Horizons spacecraft, which visited Pluto in 2015, set a new record when it buzzed by the most distant object yet visited by humanity: a remote space rock nicknamed Ultima Thule. The object — officially dubbed 2014 MU69 — orbits the sun a whopping 4 billion miles from Earth, deep within the realm of frozen rocks called the Kuiper Belt. That distance meant it took more than six hours for the spacecraft’s signals — traveling at light-speed — to reach Earth. The delay will only increase as New Horizons continues speeding deeper into space at 9 miles per second. It won’t finish sending back data on the space rock until summer 2020.

When the first images trickled in, they revealed Ultima Thule to be a snowman-shaped world. Since then, researchers have found it oddly flat — less a snowman and more like two conjoined pancakes poured too closely together in the pan. Its two lobes, now called Ultima and Thule, were likely separate bodies that collided gently in the distant past. The region around Ultima Thule was clear of any dust, moons or rings. Those facts, and the asteroid’s fairly uniform makeup, make scientists think it’s led a quiet life in the far reaches of the solar system.

Astronomers often consider space rocks the building blocks of the solar system, since they’ve undergone fewer changes than the material in large, complex bodies like planets and moons. For researchers looking for a pristine example, lonely Ultima Thule may be exactly the right target.

[This story originally appeared in print as "Exploring the Farthest World Yet."]