NASA recently released this cool picture of the Ares-1 rocket stack inside the assembly building: 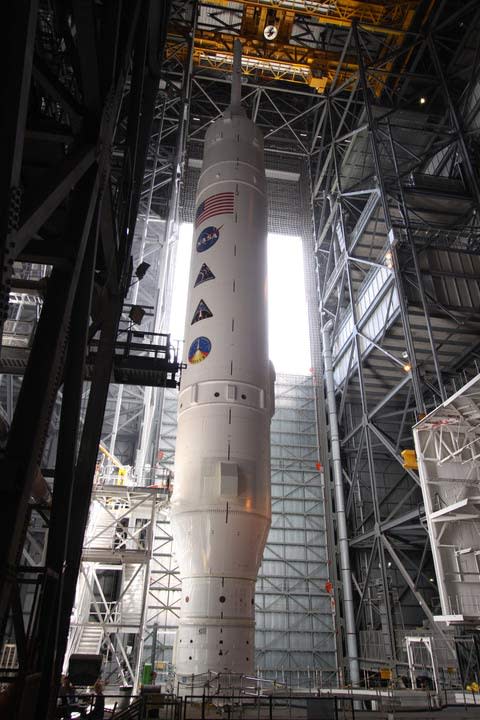 I have not yet reached a conclusion about my personal opinion on the Ares rockets... there is much controversy and speculation going on right now about whether NASA will even build these rockets en masse to replace the Shuttle. The Augustine Commission -- a group of people asked to review NASA's future of the Shuttle, Constellation, the space station, and going back to the Moon and on to Mars -- released some of their results but I haven't had time to review much yet. It's a lot to read, and I have a lot to do. But I'm not exactly thrilled that this is happening this late in the game for NASA, when there are only six Shuttle flights left, and then the U.S. faces a gap in our ability to loft humans into space that will last at least four years (and I'm betting it'll be a lot more). Also, a static test firing of the motor for Ares was supposed to happen the other day, but was canceled due to a failed power unit, and the test has been postponed for an undisclosed amount of time. These things happen, but it's not a great sign.