Are Liquid Crystals Responsible for the Origins of Life on Earth? 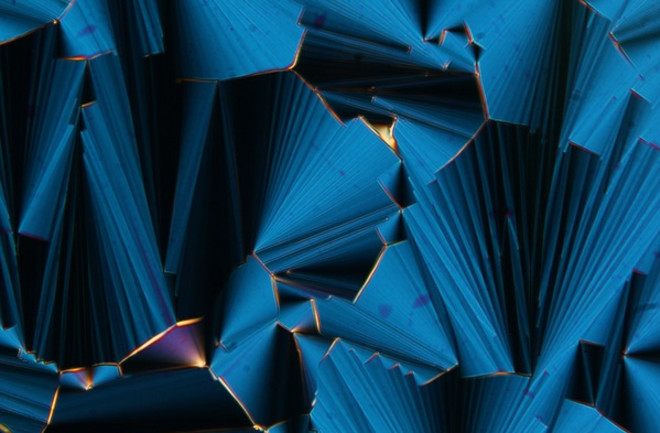 RNA can form liquid crystals that allow up to 12 nucleotides to form short chains, which could then link into longer ones. This image, obtained with polarized optical microscopy, shows such RNA liquid crystals. (Credit: American Chemical Society)

There are a number of theories about how life began on Earth, but one new study published October 3 in the journal ACS Nano suggests that the building blocks of life could have been created with liquid crystals.

Liquid crystals have properties of both conventional liquids and solids — they flow like a liquid, but their molecular structure is ordered and symmetric like a solid crystal. You’re likely familiar with them already — liquid crystal display (LCD) screens are used in a multitude of common tech products like computer monitors and television screens.

The same state of matter that makes your television screen light up may have played a role in sparking life on Earth. In one new study, scientists found that short RNA molecules can form liquid crystals, which motivate growth into longer chains that are required for life to develop.

Today, DNA holds our genetic blueprints and RNA carries out its instructions. But leading scientific theories suggest that life on Earth developed in an “RNA world,” where RNA handled both genetic information and metabolic actions before DNA or proteins had formed, according to a statement. Researchers find evidence of this in “ribozymes,” which are strands of RNA that act like enzymes to promote metabolic processes and still exist in modern genomes. “The most ancient molecule is actually RNA,” Tommaso Bellini, a co-author of the study from the Department of Medical Biotechnology at Università di Milano, Italy, said.

But even if chains of RNA carried out important tasks on early Earth, until now, researchers weren’t sure how these chains could form without the help of proteins or supportive enzymes to put them together. According to the research carried out by Bellini and an international group of collaborators, liquid crystal states could have helped short pieces of RNA to form up, then develop into longer and longer strands.

The researchers looked at different scenarios that might allow short pieces of RNA to self-assemble on their own. They found that at high concentrations, short sequences of RNA (six to 12 nucleotides long) could spontaneously develop into ordered liquid crystal phases. These liquid crystals formed more easily when the researchers added magnesium ions or polyethylene glycol.

These incredible findings stem from previous work, Bellini explained, in which the same team found that very small fragments of DNA could spontaneously order into liquid crystals in certain conditions.

The new RNA results, he said, will hopefully help us to understand how complex structures and biomolecules could have formed on a primordial Earth. “The novelty we’re bringing,” he added, is that the study introduces the idea of “the self-organization of the molecules.” The chicken-or-egg question of how RNA could develop without the tools it needed to develop seems solved. And understanding how RNA can self-organize into states like liquid crystals “can help in understanding why they [RNA] made the longer and more complex biomolecules” that ultimately allowed DNA and proteins to come along.