Are Humans Inherently Violent? What an Ancient Battle Site Tells Us

Nature or nurture? The origins of human violence may be deeply rooted in our evolutionary history. 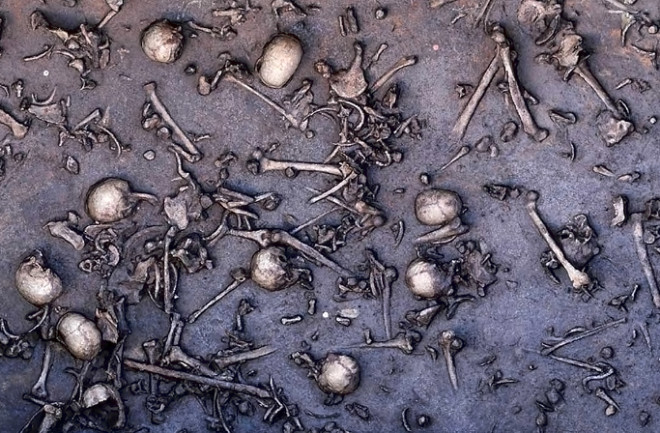 The skull, though weathered from millennia of brutal heat and scouring sands, is unmistakably human. Unmistakable, too, are the signs of a violent death: massive fractures from the blunt force of a weapon wielded by another human. The shattered cranium is one of several from a site in Kenya known as Nataruk, where, long ago, a band of hunter-gatherers met its end.

Described in Nature in 2016, the remains are believed to be among the earliest evidence of human warfare. Although the terrain is arid and desolate now, around 10,000 years ago this was a lagoon near Lake Turkana, surrounded by lush vegetation. In this Eden-like landscape, aggressors captured and massacred at least 27 people: men, women — one of them pregnant — and children.

The most complete remains are 12 skeletons found facedown in what was the lagoon. The captors used blunt force trauma to the head to kill, but other fractures — at the neck, ribs, knees, legs and hands — speak to the brutality of the event. A few of the victims were bound before death, and some have arrowheads of stone and obsidian embedded in their bones. Obsidian, a volcanic glass that is relatively rare around Lake Turkana, suggests that the marauders may have come from a different region.

At Kenya’s Nataruk site, a fractured skull is a clue to even earlier violent human conflict. Marta Mirazon Lahr, enhanced by Fabio Lahr

Richard Wrangham, a biological anthropologist at Harvard University who has studied the evolution of human warfare, says the find at Nataruk shows that violent conflict is ancient and primal, a vestige of our pre-Homo ancestry rather than a recent adaptation to life in settled societies. When territories are large and numbers few, Wrangham says, both humans and chimps — the living species nearest our own — generally practice avoidance. After all, open conflict is risky: It’s safer to stay in your own backyard and mind your own business. But alpha males of both species can be tempted, as Wrangham puts it, “with dreams of cheap victory.” If they perceive an advantage, such as having greater numbers than another group, they will typically launch a surprise attack.  Grave Tidings  The mass grave at Schöneck-Kilianstädten, on the outskirts of Frankfurt, Germany, may mark the aftermath of one such guerrilla raid. Discovered during construction of a road in 2006, the roughly 7,000-year-old site documents the annihilation of an entire community. Thirteen adults and 13 children were tortured, killed and dumped into the settlement’s refuse pit, with arrowheads found among the bones. Archaeologists found no remains of women between the ages of 25 and 40 at the site. That’s not at all surprising, says Christian Meyer, an osteoarchaeologist and lead author of a 2015 study of the find: Young women were commonly taken captive.

In 2016, researchers modeled intraspecies violence as an evolutionary trait among different mammal lineages. The darker the line, the more violent the species. Humans, indicated by the red triangle within Hominoidea, evolved in one of the more murderous bunches. Reprinted by permission from Macmillan Publishers Ltd/Nature/José María Gómez et al./Nature19758/13 October 2016

The evidence echoes that of other massacre sites from around the same time, most notably Talheim, some 80 miles south of the Schöneck site, and Asparn-Shletz, just outside Vienna: mass graves with jumbles of shattered bones and pierced skulls, entire communities wiped out. At Schöneck, the lower leg bones of most of the young men showed a nearly identical pattern of blunt force breakage probably made by the Neolithic weapon of choice, the ax-like adze. Meyer speculates this systematic but nonlethal mutilation was symbolic, and could hint at genocide.  Younger than Schöneck by more than 3,500 years, a Bronze Age site in northeastern Germany records an even larger violent event: a massive battle. In 1996, an amateur archaeologist discovered a few human bones and an ancient wooden war club eroding out of the bank of the Tollense River. One arm bone had an arrowhead lodged in it. A formal dig began in 2009, and even though only about 20 percent of the site has been excavated, project director Thomas Terberger and colleagues have identified remains of more than 100 different individuals, including women and children.

Up to 2,000 people may have participated in a battle along Germany’s Tollense River some 3,500 years ago. Remains include a skull with a massive fracture from a club. LAKD M-V

Based on these finds, the team estimates that up to 2,000 people may have participated in the conflict. Although researchers believe young men did the fighting, Terberger says women and children likely assisted by providing supplies and relaying messages on the battlefield. Weaponry found includes wooden clubs, bows and arrows, and a few swords.  Terberger believes that the massive Tollense site shows that researchers have long underestimated the scale of conflicts in Bronze Age Europe. “This looks like a community defending itself against invaders,” Terberger says. Some of the Tollense bones had chemical traces of millet — a rare crop in northern Europe during the Bronze Age — which could mean the individuals came from the south. The strategic location of the battle (a river crossing) also suggests the aggressors may have been trying to push into new territory.  Conflict vs. Collaboration  Wrangham and other researchers believe that these sites, Nataruk in particular, support the notion that we dragged our violent nature along with us as we became human. A 2016 paper in Nature that looked at evidence for lethal intraspecies violence among all mammals supports this idea. The researchers concluded that individuals are most likely to kill each other when the species is both social and territorial, traits apparent in some apex predator mammals, such as wolves and lions — and humans.

Other remains found at the site include an upper arm with a flint arrowhead buried in the bone. Landesarchäologie/S. Suh

But University of Notre Dame anthropologist Agustín Fuentes, author of The Creative Spark: How Imagination Made Humans Exceptional, believes that violence does not define the basis of human nature. He notes that out of some 2,700 human fossils dated from 2 million years ago to roughly 14,000 years ago, only about 2 percent show any evidence of lethal aggression. After that time, says Fuentes, we see a definite uptick in numbers of sites with clear evidence of aggression and homicide — in fact, it doubles. The incident at Nataruk, he says, was well within this time frame. The apparent surge in violence and aggression coincided with humans beginning to settle and create societies with a shared sense of group identity. And with that came a new category and natural foil: the outsider.  In evolutionary terms, the trait we call aggression is a complex cocktail of genes, hormones, learned behavior and culture. Each of these elements on its own performs some task that helped us succeed as a species. These ingredients can combine in different ways and with other elements to form a variety of behaviors, some of which are constructive, and some of which are not.  According to Fuentes, war and other destructive capabilities are merely the flip side of the same uniquely human faculty that has enabled us to coexist peacefully, to innovate, to travel in space and shape our world. “We are,” Fuentes says, “both the potentially nicest and the potentially cruelest species on the planet.”