Are Aliens Behind a Star's Crazy Light Patterns?

If an alien megastructure indeed encircles a star known as KIC 8462852, it's 1,500 years old and no one may be home anymore. 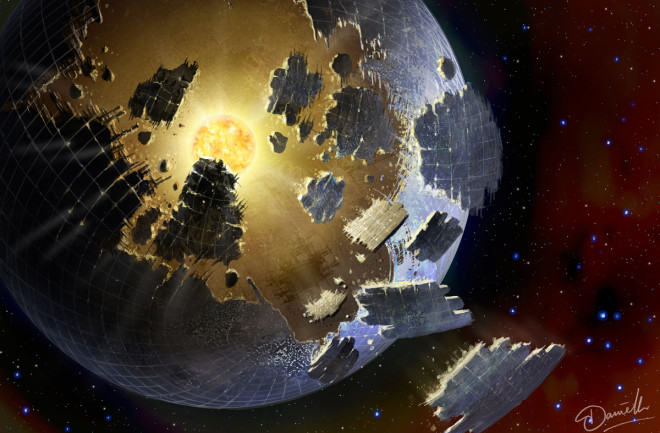 An artist's illustration of an alien megastructure around KIC 8462852. It's light pattern remains unexplained, but aliens probably aren't the cause. | Danielle Futselaar/SETI International

Q: What’s the deal with that star that was giving off weird light signals? People on the news were suggesting it might be the work of aliens. Seriously? If so, what are the implications for humanity? — James Praderas, Bellevue, Wash.

A: The star known as KIC 8462852 does have an unusual light pattern, meaning something odd probably orbits it. Right now, we don’t know more than that. Speculation includes a comet swarm or a giant cloud of dust or gas. One other possibility has also captured the media’s attention: The star could host a gigantic alien structure.

And this explanation is actually being taken seriously — sort of — by scientists. A study published in December announced SETI scientists had searched the system for laser signals, but they had found none. Still, some remain hopeful of finding other signs of intelligence.

What if astronomers were to find strong evidence that KIC 8462852 is indeed enveloped by an alien megastructure? First, we have to consider that the star resides almost 1,500 light-years away, so what we see is nearly 1,500 years old. That could mean no one’s home anymore. Second, there’s the public’s response. To gauge this, you could ask a social scientist or a sci-fi author.

Social science suggests that knowing a technologically superior alien civilization exists could pose an existential threat for some people, perhaps fundamentally threatening their worldviews or religious beliefs. But this doesn’t necessarily mean panic in the streets, or an end to warfare or religious fanaticism. While some might initially deny the aliens’ existence, human beings have usually shown themselves capable of eventually incorporating such a massive paradigm shift into their various belief systems.

Sci-fi author Allen Steele thinks the overall impact on society would be fairly tame. “After a couple of weeks, I think most people would settle back to the way they’d been before,” he says, “only now with the awareness that they no longer belong to the most intelligent or powerful race in the known universe.” It would be a blow to the ego, sure, but having learned long ago that we aren’t the center of the universe, it would be a familiar blow.