The asteroid Apophis is about to make its close flyby of Earth. And astronomers want to get a good look at it while they can. 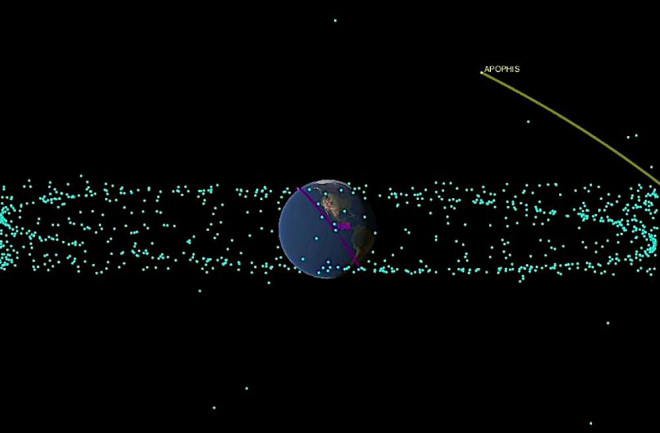 Apophis will pass close to Earth in 2029, but there's very little chance it will hit us. (Credit: NASA-JPL)

The asteroid Apophis sits atop a shortlist of potentially dangerous objects that could one day hit Earth. And in March, the aircraft carrier-sized asteroid will make its final close path to Earth before 2029, a year when astronomers once wondered if it would strike our planet. We now know Apophis won't hit Earth anytime soon, but the upcoming flyby will still provide a relatively rare opportunity to study the space rock up close.

As the asteroid draws near, it will also make a fortuitous pass in front of a relatively bright star, letting amateur astronomers get in on the action. On Sunday, February 21, at around 11:50 P.M. Central Time, Apophis will move across the face of a distant star, creating what astronomers call an occultation. It’s like a miniature version of what happens when Earth’s Moon eclipses the Sun. Such occultations are a great chance to learn more about the size, shape and composition of planetary bodies.

In the past century, occultations have yielded a range of insights into distant objects that would’ve been otherwise hard to discover from Earth. Pluto’s faint atmosphere and the rings of Uranus, for example, were both discovered when those planets occulted distant stars.

And that’s why researchers are calling on amateur astronomers to pull out their telescopes on February 21 to try and capture the Apophis occultation.

How to Observe Apophis

The telescope company Unistellar has put together an article with detailed instructions on how to observe the Apophis occultation. Because of the specifics of the alignment, it will only be visible from a very thin, winding line that stretches across Earth’s surface from the Pacific Northwest all the way to West Africa.

The dearth of major observatories along that path means it’s unlikely professional telescopes will get a good view. In the past, astronomers have captured other close flybys of Apophis using the Arecibo Observatory in Puerto Rico. But after Arecibo’s collapse, researchers are left to find other means of studying the near-Earth asteroid.

However, there are legions of amateur astronomers along the occultation path, all with backyard telescopes. And the cameras used on modern telescopes are now advanced enough that many should be able to detect the dimming starlight, even if the human eye can't notice it through an eyepiece. Astronomers can combine the data from citizen scientists across the world and try to glean insights into the asteroid.

Radar observations of the asteroid Apophis, including these from 2012, have helped refine the space rock's orbit. (Credit: NASA/JPL-Caltech)

Apophis rose to infamy back in 2004 after observations suggested there was a nearly 3 percent chance it could slam into Earth in April 2029. That may not sound too concerning, but those odds are terribly high compared to the odds of an impact from any other known large asteroids.

Astronomers also thought there was a small chance Apophis could pass through something called a gravitational “keyhole.” This small region of space takes up only a half a mile or so between Earth and the Moon. But if Apophis were to pass through it, the asteroid's orbit could be altered enough to put it on a direct collision course with Earth.

In the years since then, however, astronomers have shown that it’s extremely unlikely that Apophis will hit Earth in the coming decades. In 2029, it will pass safely some 19,800 miles (31,900 kilometers) from Earth’s surface, according to NASA. But that’s still close enough to come between us and some Earth-orbiting spacecraft.

Small asteroids pass near Earth often, but it's rare for an object so big to get so close.

Another close pass by Apophis will happen in 2036, but observations made by astronomers in 2012, including researchers at NASA's Near-Earth Object Program Office, helped rule out the possibility of a cosmic strike.

The next significant chance of an Apophis hitting Earth doesn’t happen until April 2068, when the odds are still a scant 1-in-150,000. Plus, results released this month may have lowered those odds even more.

So, why are astronomers so keen to observe Apophis?

Even if the odds of a devastating impact are low, there are likely other asteroids out there like Apophis still waiting to be discovered. This space rock is part of a larger group called the Atens asteroids, which all cross Earth’s orbit. As a result, many are considered potentially dangerous.

And for all the studies of Apophis over the years, there’s still much to learn about it, including its exact orbit. There are a host of factors that could slightly change its trajectory over the next half century. And while the asteroid is big enough to do serious damage to our planet if it hit us, it’s also small enough that it’s hard to observe. So, getting more precise measurements of where it currently is could be very helpful in predicting whether it's a long-term threat.

“One of the main mysteries about Apophis is how its orbit changes when the asteroid is illuminated by the Sun,” Franck Marchis, senior astronomer at the SETI Institute and Chief Scientific Officer at Unistellar, said in a media release. “This effect, called ‘Yarkovsky,’ is very difficult to simulate, so a direct observation of an occultation will give us an extremely accurate estimate of the position of the asteroid.”

If you’re interested in taking part in observing the occultation, Unistellar and its partner SETI have set up a page that will help you get prepared.