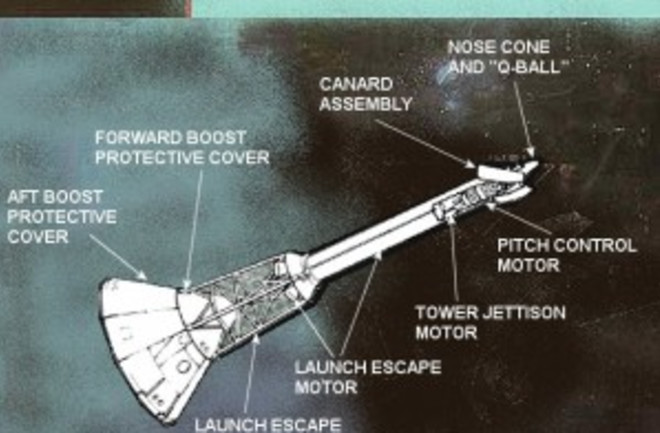 At the very top of the Saturn V stack, at the top of the Launch Escape Tower, was a small ball bored with eight holes. These holes led to the Q-ball, an unassuming instrument that played a huge role in making Saturn V launches safe for astronauts.

The Q-ball was similar to an airplane’s pitot tubes. As air flows into the pitot tubes on a plane, data on airspeed and pressure is sent to the computer's onboard autopilot system and onto displays for the pilot. They're common and just look like darts sticking out the side of the fuselage near the nose; check for them next time you're at an airport! The Q-ball didn't measure airspeed, instead it measured dynamic air pressure as the rocket rose through the atmosphere. That’s where it gets its name — pressure is referred to as Q, so air-pressure-measuring-ball is the Q-ball.

Data measured by the Q-ball was fed into the command module's computer for the crew to see, and was also part of the telemetry sent to controllers on the ground. But it wasn't just data for data’s sake. It helped determine that the rocket was flying on course. Not only did it measure air pressure on all sides, the Q-ball was sensitive enough to tell if the rocket was off course, and could signal the first stage engines to correct the minuscule error.

But the Q-ball's main role was in the event of a launch abort. The launch escape system on Apollo was the lattice-like structure on top of the command module that housed a solid rocket motor that delivered more thrust than the Redstone rocket that launched the Mercury suborbital missions. If a launch was aborted, say, because the rocket exploded just after liftoff, the launch escape system would fire and pull the spacecraft off the rocket stack so it could clear an explosion and land the crew safely. The Q-ball, measuring the air pressure on all sides, helped determine which way the spacecraft and launch escape tower were flying.

Some launch footage shows the Q-ball looking particularly bulbous before a launch. Like an airplane’s pitot tubes, the Q-ball was protected before launch so nothing could clog the holes; insects building nests in unprotected pitot tubes have brought down planes, so the risk was real. The cover was only released seconds before launch, and it was a bit of a procedure.

The Q-ball cover was two halves held together by a 2-inch rubber band with a razor blade wedged behind it between the halves. Wire rope connected to both halves of the cover and the razor was routed through a pulley on a crane at the top of the launch umbilical tower, then down a tube on its side. A weight at the end of the rope rested on a lever in the tube. The lever, controlled by a pneumatic solenoid valve in the Launch Control Centre, would rotate when activated from the ground, letting the weight drop, pulling the rope, severing the band, and separating the cover from the rocket.

It was a bit of a painfully over engineered system for something so simple, but it was the best way to make sure the Q-ball was properly and safely uncovered before a launch. It was, after all, a critical part of a launch abort, though luckily in seven years of Saturn launches no crew ever had to end a mission before reaching orbit.

Sources: NASA; CollectSpace; How Apollo Flew to the Moon by David Woods.