The space race formally ended on July 17, 1975, when the U.S. and Soviet Union linked up in orbit and shook hands during the Apollo-Soyuz mission. 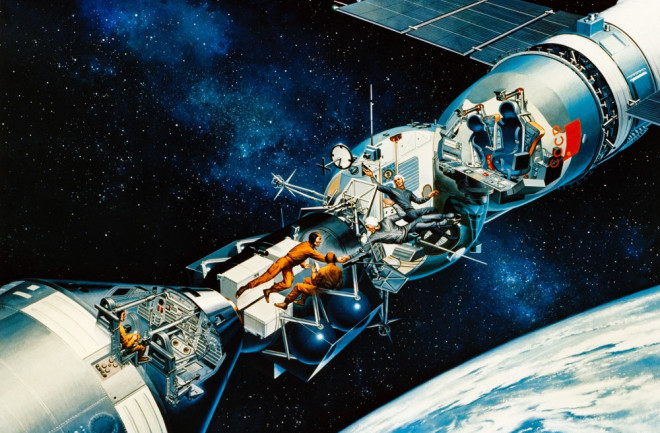 On July 17, 1975, the U.S. and the Soviet Union docked two spacecraft together in orbit as part of the Apollo-Soyuz Test Project, humanity’s first international space mission. Over the course of two days, NASA astronauts and Soviet cosmonauts performed a series of scientific experiments and technology demonstrations. But the mission’s main purpose was far more earthly. It was a political demonstration of peace.

For some historians, the Apollo-Soyuz mission marked the formal end of the space race and the beginning of an extended era of international cooperation in space. Today the spaceflight gets credit for helping pave the way for the joint Shuttle-Mir space program, as well as the International Space Station.

“I really believe that we were sort of an example … to the countries,” astronaut Vance Brand said in a NASA oral history interview in 2000. “We were a little of a spark or a foot in the door that started better communications."

For decades, the space race had seen the two superpowers race to master and demonstrate many of the technologies needed to destroy each other with nuclear weapons. Yet, instead of ending in nuclear war, the space race concluded with a handshake in microgravity.

When the Soviet's launched humanity's first satellite, Sputnik 1, it caught the rest of the world by surprise. (Credit: NASA)

Brief History of the Space Race

On October 4, 1957, the Soviet Union launched Sputnik 1, humanity’s first satellite, stunning the world. America responded months later with its own spacecraft, Explorer 1. This back and forth continued to escalate, and in 1961, the Soviet Union put the first human into Earth orbit, once again demonstrating its technological superiority and forcing America to respond.

Amid the heightening Cold War tensions, U.S. officials went looking for some new goal that could be touted as evidence of America's dominance in space. To president John F. Kennedy’s administration, the moon seemed like the perfect fit. And most importantly, the timeline was long enough that America finally had a chance to beat the Soviets.

In a defining speech at Rice University in Texas in September of 1962, just one month before the Cuban Missile Crisis, Kennedy made America’s lunar intentions clear.

The bet paid off. By 1968, NASA’s moon program was far ahead of its Soviet rival. As the U.S. wrapped up preparations to send the first Apollo astronauts to the moon, the Soviet Union launched its Zond 5 spacecraft, carrying a pair of tortoises into lunar orbit.

“It really was one of those last hurrahs for the Soviet spaceflight program because it was one of the last times they were able to preempt the Americans in any real way,” Cathy Lewis, international space program curator for the Smithsonian’s National Air and Space Museum, told Discover in 2018.

And on July 20, 1969, America achieved a major milestone in the space race as the Apollo 11 crew walked on the moon. Over the course of four years, Apollo astronauts traveled to the lunar surface six times. No Soviet cosmonaut ever made the trip.

But the Soviet Union hadn’t set idle during that time. While America was putting boots on the moon, cosmonauts were racking up experience in low-Earth orbit, building humanity’s first space stations with the Salyut program. They were practiced in spaceflight. And their biological experiments putting animals in satellites had offered up new insights into how the environment of space can change the body.

Throughout the 1950s and 1960s, the two nations had repeatedly talked about cooperating in space and sharing scientific insights. But the Cold War tensions stopped any true exchange from taking place.

Then, in the early 1970s, as both countries were pushing new limits in spaceflight, a period of renewed cooperation called “Detente” developed on the ground. The Vietnam War was winding down, and both superpowers had just spent enormous fortunes expanding their military might. With the two sides eager for peace, the United States and the Soviet Union negotiated nuclear weapons control agreements and generally began easing tensions.

Soyuz commander Alexei Leonov greets NASA astronaut Deke Slayton after the Apollo-Soyuz docking. Both men were already legends in spaceflight at the time, adding drama to the moment. (Credit: NASA)

The Handshake in Space

To some politicians, the ultimate symbol of détente would be docking a Soviet capsule with an American one in low-Earth orbit for a “handshake in space.” Scientists and engineers saw benefits to such a joint mission, too. America had talented space pilots and advanced long-distance space technology. Meanwhile, the Soviets had focused on automation and had pioneered long-term spaceflights. Both had something the other was interested in learning about.

An American delegation traveled to Moscow in 1970 to lay the framework for the mission, and within two years, the Apollo-Soyuz Test Project was officially born.

But not everyone liked the idea. Each side worried the other could steal its technology. Some defense hawks, and even a New York Times editorial board opinion, noted that Apollo-Soyuz offered a “technical and scientific bonanza for the Soviet Union's lagging astronautical program.” Meanwhile, the Soviets continued insulting American spacecraft.

Finally, three years after the final Apollo moon flight, the two superpowers overcame the political and engineering hurdles to make the rendezvous happen, including the design and development of an American-funded docking module that could mate the two crafts.

On July 15, 1975, a Soyuz capsule and an Apollo capsule — leftover from a canceled moon flight — launched within hours of each other from opposite sides of the planet. Then, two days later, they met up 140 miles over Earth’s surface.

“Soyuz and Apollo are shaking hands now,” Soyuz commander Alexei Leonov said as the two spacecraft gently docked. And as the door opened between the ships, the astronauts inside exchanged their own handshakes and posed for pictures.

‘They Probably Thought We Were Monsters’

Over the next two days, the men learned to work together as they toured the other country’s spacecraft and carried out five joint scientific experiments. At first, though, they struggled to even communicate. Each wanted to speak their own language, but they eventually realized that they all understood things better when they attempted to speak the other’s language.

“We [the Americans] thought they [the Soviets] were pretty aggressive people and ... they probably thought we were monsters,” Brand said. “So we very quickly broke through that, because when you deal with people that are in the same line of work as you are, and you're around them for a short time, why, you discover that, well, they're human beings."

Together, the crew helped their space agencies gather new technical and scientific insights. One experiment tested the effects of low-gravity on the development of fish eggs. Another created an artificial solar eclipse using the Apollo capsule to block the sun while cosmonauts took pictures of the solar corona.

The moment of peace in space was admittedly brief. Just two days after docking, the ships parted ways. And before long, Cold War tensions reemerged.

After Apollo-Soyuz, no American astronaut would venture to space for roughly six years, until the first space shuttle launched in 1981. Meanwhile, the Soviet Union, followed by Russia, kept sending their Soyuz capsules into orbit.

However, the two countries did eventually collaborate in space again — first with the Shuttle-Mir program, then with the $150 billion International Space Station, which was largely funded by U.S. taxpayers. And when the Space Shuttle Program came to a close in 2011, NASA was left with no way to keep putting astronauts in orbit themselves. The U.S. had to buy tickets to the International Space Station on Soviet Soyuz capsules.

In fact, Apollo-Soyuz was the last time NASA astronauts rode an American capsule into orbit until May 2020, when SpaceX’s Crew Dragon spacecraft delivered astronauts Bob Behnken and Doug Hurley to the ISS.

So, the space race may have ended in a handshake, but the questions and challenges of Apollo-Soyuz have never gone away. The U.S. continues to partner with Russia in space, and pay for the privilege, even as the two countries continue to challenge each other on terra firma.