This is so so so freaking cool: the Lunar Reconnaissance Orbiter has taken pictures of the Apollo landing sites! 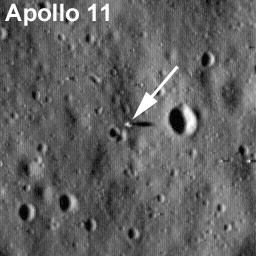 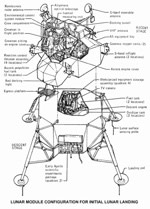 That’s EXACTLY how I pictured it would look. That picture shows the lower half of the Lunar Module, the part that stayed behind on the Moon when Armstrong and Aldrin blasted back up off the surface. It was essentially dead weight, so the LM was designed to split in half, with the top half (the aptly-named Ascent Module — click on the diagram on the right for details) going back up into orbit to meet with Michael Collins in the Command Module. From there they returned to Earth.

The Descent Module is about 4 meters or so across, and the image, above taken when the Sun was low on the horizon, clearly shows the DM and its shadow cast across the lunar surface. The region where they landed was fairly smooth, so the module is the only thing large enough in the image to cast an appreciable shadow.

Wow. Look at that! Physical, tangible evidence that human beings walked on the surface of the Moon. And not just that: we did it again and again. Behold! 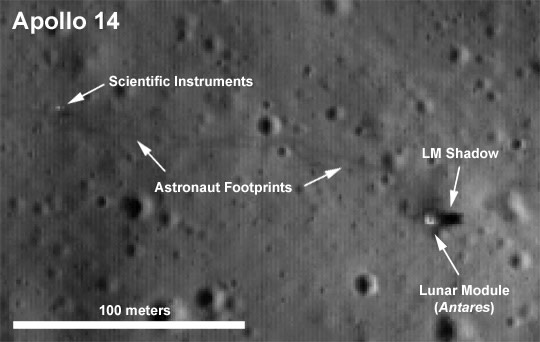 That’s the Apollo 14 landing site, and you can see where the lunar surface was disturbed by the astronauts bootprints! Some of that may also be tracks from a wheelbarrow-like device called the Modularized Equipment Transporter which Alan Shepard and Edgar Mitchell used to help them carry equipment and samples to and from the lander.

Oh man oh man oh man! And mind you, these pictures are not even the highest resolution LRO can provide; future observation will have twice this much detail!

I love this. Not because I needed proof we went, of course. But there is just something about seeing new pictures after all these years. Apollo may seem like ancient history, but those artifacts on the Moon are still sitting there, in many ways as fresh as the day they were placed there.

But there is one dividing line that can inspire us, fill us with wonder, make us dream of bigger goals, higher aspirations, better ways to live our lives for the future. And that is the dividing line between the time we were a race shackled to the ground, confined to a single planet… and the time a human being stepped foot on another world.

And there it is, in pictures and in fact. This is what these pictures mean. We humans spend a lot of time looking around, looking out, looking down. But sometimes, for just a brief moment, we look up. We did it once before, and it’s time to do it again.