Apollo Astronauts, in Their Own Words

The astronauts who flew to the moon reflect on legacies, comfort and loneliness. 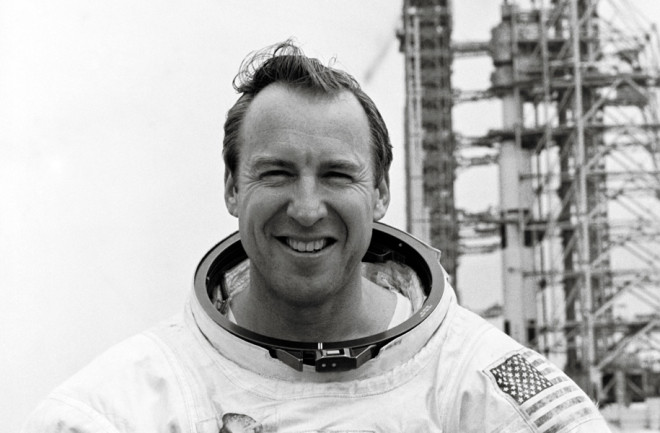 Being an astronaut isn’t easy: grueling physical training, punishing mental workouts, willpower pushed to the limits. Plus, of course, the risks — there’s no guarantee of safe return. “If you want to get in this business,” says Apollo astronaut Jim Lovell, “you better be optimistic.”

The 32 men assigned to fly in the Apollo program faced unprecedented challenges, but they also got to do something no one else has ever done. We spoke to some of them to find out what it was like.

On dealing with the pressures:

“The general public at large was excited and kind of filled with a tenseness over the fact that the [previous manned mission] had been a fatal accident. But we never expected that; of course, I’m sure that the prior crew did not, either. But we spent that 21 months getting about 1,060 changes in the spacecraft. Our crew was responsible for some of them, the engineers were responsible for most of them, and we’re all working together looking forward to getting back on schedule and landing a man on the moon before the decade was out, because that was the goal. We were also still in a race with the Russians.

“It’s interesting. We got into orbit, and we had a lot of objectives to accomplish because there were a lot of tests up there. But there was also kind of a sense of relief. We were away from all the engineers and all the ground controllers, and they couldn’t talk to us very often. We just started going to work on the things we could.”

On the importance of exploring:

“I think that the education of our society at large should be focusing more and more on asking real questions about pushing our whole society out farther and farther. We’ve spent a whole lot of time making things more efficient, which is pretty good, but we don’t teach people that you’ve got to be willing to stick your neck out to get someplace in the universe or in the world.”

On making it happen:

“Apollo had the backing of the American people. So it was fully funded. And during the time that I ran the program, I didn’t have any need for extra money. The money that was allocated was sufficient to do the program, unlike later programs where NASA asked for less than it took to run a program, and consequently they were always stretched for dough.

“The NASA administrator during the time of the Apollo stuff asked the engineers how much they thought it would cost, and they came back with a figure around $20 billion. He went to Congress and said it was going to cost $40 billion. Congress approved it, and we had enough money to do it right. Now, later on, being on the outside, it looks like they go in and ask for what they think they can get, not what they think they need.”

“The Gemini [capsule, below] was very, very tight. You couldn’t stretch all the way out. You were in the seat, and that’s where you stayed. In Apollo, we’d get up and float around, so it was much more comfortable. Yeah, it was a much bigger spacecraft.”

“You begin doing some of the final testing on the vehicle itself stacked on the launchpad. Now, you’re no longer in the Rockwell factory or the Grumman factory. But you’re now on the launchpad, on top of that big Saturn V, 360-some feet in the air, and the gantry all around.

“You take a break for lunch and all of the guys in the control room have taken a break for lunch, and you’ve got a brown bag there with your sandwiches and your drink. Regularly, I — and everybody else, I’m sure, that was on a crew — would walk out along the steel structure of the gantry up at that 360-foot level, and you would sit out dangling your legs over the ocean, looking out over the ocean, the highest thing in Florida — in more ways than one, probably. But those kinds of moments are the things that are so personal and stay with you. They’re just wonderful moments.”

On keeping his head:

“My way of dealing with susceptibility to motion sickness on Apollo 9 was to say, OK, I’m the lunar module pilot. I don’t have to move around in the first couple of days of the mission; that’s up to Jim [McDivitt] and Dave [Scott]. I’m going to sit here, and I’m not going to move my head a lot, and I’m going to adapt without getting sick.

“That was a great scheme except that after I got sick, we learned that you don’t adapt without moving your head. All I did was delay my adaptation to the worst possible time. It was absolutely perverse. But I thought I was doing the right thing, and nobody knew enough to tell me not to. The doctors didn’t know diddly squat, and the motion sickness pills don’t work worth a damn.”

“When I got back, we were subjected to a lot of press inquiries, and when they came to me, most of them centered on weren’t you the loneliest man in the history of space, behind the lonely moon all by your lonely self? I thought their question was ridiculous. I simply said that I was too busy to be lonely; however, the truth was considerably different.

“I was very happy with the command module. In a way, I thought it was like a miniature cathedral. The altar was really our guidance and navigation station, and we didn’t have any clerestory windows, but we had nice lighting and it was an elegant, sturdy, spacious place. It was my home. I was king. I was not a master of the universe. I was not even an apprentice in the universe, but I was king and, you know, like most kings, I had to be careful. Like, there goes the fuel cell No. 3 acting up again.

“I didn’t feel away and isolated. I felt like I was doing a useful job and I felt included, not excluded. And so I was very happy to be there that way, and lonely? No!”

On the view from the launchpad:

“Getting into the spacecraft is sort of odd. It’s not like you go out to that gigantic booster every day, but we’d been out there a number of times, and it was always a beehive of activity. The day of the launch it was quiet; there was nobody around.

“And we got on this dinky little elevator and went up 360 feet, roughly, and got off at what they called the white room. And then slowly, one by one, other things happened. We loaded ourselves into the command module Columbia, but I had plenty of time to look around. I can remember if I closed my right eye, all I saw was the beach and the ocean, and the world of Ponce de León it could’ve been. There was no sign of humanity. It was just good Planet Earth.

“Vice versa, if I closed my left eye, then I saw this gigantic heap of complex machinery, the 20th century that we were, people of machines, and I can remember looking and saying, ‘Geez, I see that, I see that — I’m not sure if I’m in the right one.’ ”

On leaving Earth during Apollo 8:

“We were so busy doing things. We went around the Earth, first of all, to test out our spacecraft — we were concentrating on how the Saturn [rocket] was working and everything like that. We knew that we were going to the moon, but it was only at the end of the Earth orbit, when everything on the spacecraft was fine, that I suddenly realized, hey, we’re leaving the Earth. We’re not just going to Earth orbit.

“And then looking back, right after that, when the engine stopped and we were up to a little bit over 23,000 mph, you could look back and see the Earth shrinking. It was sort of like if you’re in an automobile, and you’re going through a tunnel. You look in the rearview mirror, and you can see the tunnel opening slowly closing and closing. That’s exactly what that felt like.”

“I don’t think that any flight to the moon and back, ever, [wondered] whether the engines would light again or not. I mean, you have to take that on faith. There is no alternative — that’s what’s going to happen.”

“I was raised in the Air Force as a single-seat fighter pilot, so I was used to being by myself. As a matter of fact, I preferred to be by myself because I didn’t really want to be responsible for somebody else on the flight. I didn’t feel lonely. There’s a difference between being lonely and being alone; I was alone, but I wasn’t lonely. The best part of the lunar flight for me in those three days [at the moon] was when I was on the backside of the moon, cut off from Houston mission control. I didn’t even have to talk to them. I was very comfortable.”

“I was very busy in lunar orbit, probably did more science than they did on the surface. The guys who go down to the surface, they have one thing in mind. Their goal was to pick up every different-color rock they can find and bring it back. In the meantime, I’m photographing 25 percent of the moon’s surface! So there was a lot involved in what I did, but it wasn’t romantic like walking on the moon. I didn’t have the facilities with me to take any pictures inside. Well, I’m not a selfie kind of guy anyway.”

On having an extraordinary father:

Rick Armstrong: “He was just dad. He just went to work. We were just an ordinary family. We did ordinary things. We had ordinary problems.”

Rick Armstrong: “He always liked to say that he wasn’t picked to be first to be on the moon, it just worked out that way. Any one of the astronauts in the Apollo program could have ended up in the same spot.”

Mark Armstrong: “I think there’s plenty of Neil Armstrongs out there in the world. Because if you break it down a little bit, he’s a guy who wanted to serve his country. He worked hard. He prepared himself as best he could for whatever the future might bring him. He used to say that success is where preparation met opportunity.”

Interviews by Eric Betz, David J. Eicher, Alison Klesman, Corey S. Powell and Richard Talcott. Quotes have been edited for length and clarity. This story originally appeared in print as "Apollo, In Their Own Words."