Strange Maps, a blog about, well, strange maps, has another good one: the path of Neil Armstrong's and Buzz Aldrin's EVA (extravehicular activities or moonwalks) overlaid on a soccer field. 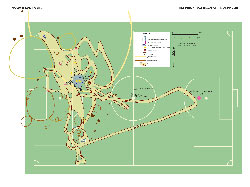 This really lets you know they didn't go very far! That's not too surprising if you think about it; this was the first time humans had traveled to and walked upon an alien world, and the goal was to do it and get back. So they only spent less than a day on the Moon at all, and only 2 hours 31 minutes actually walking on the surface. Later missions got bolder, obviously. Apollo 17, the last to the Moon, was on the Moon for 75 hours, with 22 of those hours spent on EVA. Given the round-trip time of nearly a week, that's still not very long. I haven't heard anything about how NASA plans on going back as far as mission durations. Apollo worked so well we may repeat what happened then; tentative at first, then bolder as we become more confident in the equipment and the brains behind it. In 15 years, that soccer field overlay may turn into a football field, and then a city park. Eventually, it'll be a map of the Moon itself.