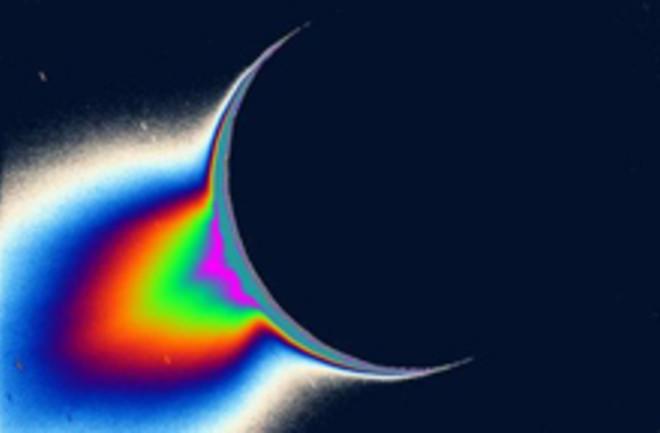 What lies beneath the icy crust of Enceladus? Ever since the NASA space probe Cassini snapped pictures of the Saturnian moon expelling enormous jets of icy vapor from fissures near its south pole in 2005, planetary scientists have debated whether the evidence points to liquid oceans beneath the moon's surface. Now, a new chemical analysis of the plume bolsters the oceanic theory, thanks to the detection of a mundane chemical: ammonia. Says study coauthor Jonathan Lunine:

“This is the first time Cassini has actually been able to ’smell’ ammonia.... And because ammonia is an antifreeze, it probably ensures that there is liquid water in the interior of Enceladus.” And where there’s water, there could be life [Wired.com].

Last month, another team of researchers also argued for the presence of an ocean when they published

their discovery of sodium salts in Saturn's outer-most ring which is thought to originate from Enceladus' plume material. "The two studies are complimentary and now, for the first time, we are getting an idea of the full picture of what's happening on Enceladus," [Chemistry World]

, says Frank Postberg, lead author of that earlier study. However, Postberg's study was contested by another paper that found no traces of sodium vapor around Enceladus, leaving the debate unresolved. Sodium is thought to be an indicator of liquid water because it suggests that salt leached from rocks into the water. In the new study, published in Nature, researchers found traces of ammonia, argon, salts, and various organic compounds in the plume, and Lunine says the presence of organic molecules is also exciting.

"Their presence indicates that chemistry is going on in the interior," says Lunine. What's more, finding these organic molecules adds to the possibility that Enceladus may have the right conditions for life to exist. "This work helps build the case that the components for life are there - heat, liquid, some organic compounds, and chemical gradients" [Chemistry World],

adds planetary scientist Dave Stegman, who wasn't involved in the study. NASA's probes have detected temperatures of around 180 degrees Kelvin (-135 degrees Fahrenheit) around the fissures of Enceladus.

“Given [the] fact that ammonia and water can melt at 176 Kelvin, we’re really in the range that liquid water could exist” [Wired.com]

, Lunine says. Scientists think the moon may be heated by

the moon's rocky interior, which may be partly radioactive, and may also be cracked and pulled by Saturn's gravity. Both those things would generate warmth, enough warmth to compensate for the feeble light of the sun, so far away [ABC News].

However, not everyone is convinced by Lunine's findings, and some suggest that the temperature readings that Lunine is basing his assumptions on were flawed. Scientists are staying tuned for new findings as Cassini continues to swing through the Saturn system. Related Content: 80beats: Does Enceladus, Saturn’s Geyser-Spouting Moon, Have Liquid Oceans? 80beats: New Evidence of Hospitable Conditions for Life on Saturn’s Moons 80beats: Geysers From Saturn’s Moon May Indicate Liquid Lakes, and a Chance for Life 80beats: Cassini Spacecraft Snaps Pictures of Saturn’s Geyser-Spouting MoonImage: NASA/JPL/Space Science Institute. An enhanced picture of a plume from Enceladus.