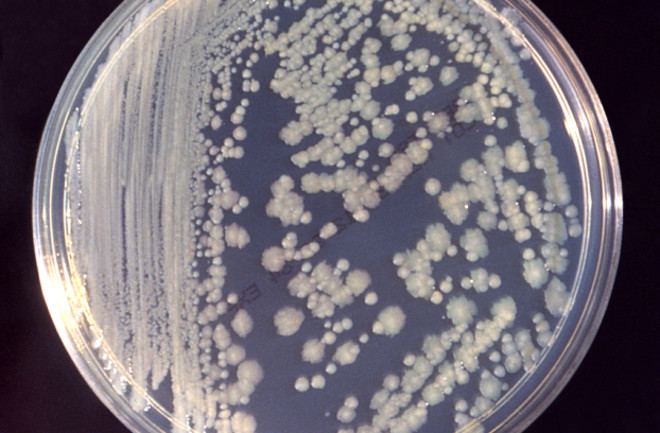 Enterobacter cloacae bacteria cultured in a petri dish. In a new study, scientists have investigated the antibiotic-resistance of bacteria on the space station. (Credit: CDC)

Wherever humans go, our bacterial companions will follow. That’s as true in space as it is on Earth, and while we’ve known that microbial astronauts are present on the International Space Station, one group of researchers has just found a new reason to worry about them.

A genomic analysis of samples collected from the space toilet aboard the station, among other places, has revealed that some of the bacteria on the ISS possess genes conferring resistance to antibiotics. There’s no danger to astronauts at the moment, say the researchers, from NASA’s Jet Propulsion Laboratory, but it is a reminder that bacteria could be a threat in the confined environment of a space station.

In this new study, researchers characterized the genomes of these species in detail and compared their genomes to the genomes of 1,291 Enterobacter strains from Earth. And, by studying the bacteria’s genetic makeup, they were able to see that the bacteria would likely be resistant to antibacterial drugs.

Nitin Singh, the first author of the study, emphasized in a statement that these strains are not virulent, meaning they do not pose an active or immediate threat to astronauts. But, Singh added, one of the strains found, Enterobacter bugandensis is an opportunistic pathogen, meaning it could potentially cause disease. A computer analysis of the species found that it did indeed pose a significant risk of causing harm to humans in the future.

The work was part of an effort to better understand how future microbial astronauts will affect human life in space.

“Understanding how microbial life grows in a closed environment like the ISS will help us better prepared for the health concerns that come with space travel,” Singh said in an email. “ISS offers us a first-hand opportunity to study an often overlooked aspect of space travel: how a spacecraft’s microbiome and life support system interact,” Singh said

The closed system aboard the space station is a unique environment for bacteria and other microbial organisms. Just as microbial species will grow, adapt, and multiply here on Earth, they will do the same in space. The nooks and crannies of equipment and storage aboard the space station are kept clean, but the microscopic organisms present will find shelter and adapt in order to survive. As the researchers found, some of those adaptations could include mutations that confer resistance to antibiotics, and make the bacteria extremely hard to combat.

By better understanding the species on board the space station, researchers hope to figure out how to best protect astronauts. For example, they could know when and how often to clean certain equipment on board, Singh said.

While the bacterial species on the space station do not pose a current risk, the human immune system is compromised in space, Singh explained. So, on future deep-space missions where astronauts might spend more time in space and bacteria might have more time to adapt and multiply, the risk of infection could be higher.

“Once the immune system starts to weaken, microbes which were previously harmless could make you sick,” Singh said.

This study was published in the journal BMC Microbiology.