The larvae of many marine creatures drift in the plankton, then settle to the seafloor and transform into adults. Bacteria often help the critters pick where to settle — and that may be just a snippet of a far more extensive conversation. 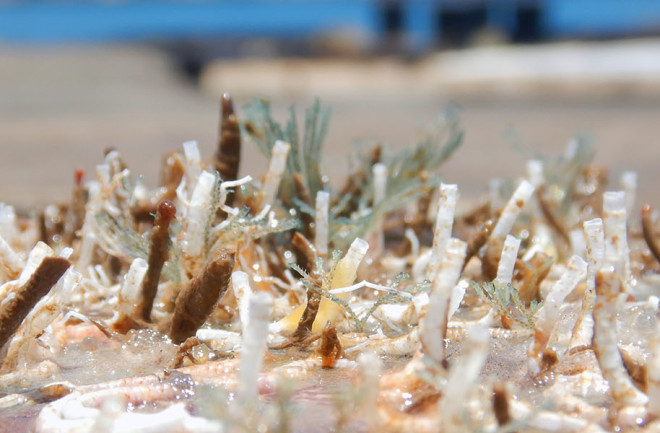 Many marine animals, such as the tubeworm Hydroides elegans (white tubes), drift in the plankton as larvae and then settle permanently on a hard surface. To help them choose the right place to settle, Hydroides depends on chemical signals from bacteria that already grow on the surface. Scientists are starting to learn just how complicated such bacteria-animal crosstalk can be. (Credit: Brian Nevded/University of Hawaii)

Pity the poor tubeworm, whose life is fraught with risk. Like many marine invertebrates, the worm spends its earliest days as a tiny larva drifting in the plankton — but sooner or later, it must choose a place to settle down. Once cemented to a hard surface, it begins the massive shape change called metamorphosis, from which it emerges in its splendorous adult form.

There are no second chances: A worm that picks a bad spot can’t try again. Faced with such a momentous decision — the most important of its life — the larva needs all the help it can get. Often, that help comes from another kingdom of life altogether.﻿

Scientists have known for several decades that some animal larvae, including those of tubeworms, select sites for metamorphosis by monitoring chemical signals released by bacteria. But they’re just beginning to realize how widespread the relationship can be, and how sophisticated — sometimes involving specialized bacterial machinery to deliver signals to larvae. This implies that communication between animals and bacteria in the oceans could be much richer and more cooperative than previously suspected.

And there could be practical applications: Experts may someday find ways to manage this communication to encourage animals to settle in some places, such as oyster farms, and discourage them in others, such as the hulls of ships.

It’s hardly surprising that tubeworms and other planktonic larvae rely on bacterial cues to help select a suitable spot for metamorphosis. After all, a thin layer of mixed bacterial species — called a biofilm — coats every available ocean surface. What’s new is the emerging breadth of this phenomenon. “In every major branch of the animal tree of life, there are species that undergo metamorphosis in response to bacteria,” says Nicholas Shikuma, a microbiologist at San Diego State University who coauthored a look at how bacteria influence animal metamorphosis in the 2021 Annual Review of Microbiology.

Bacterial induction of metamorphosis is widespread in the animal kingdom, occurring in almost every major group of animals.

In some cases, the larvae seem to be merely eavesdropping on chemical signals that leak out as bacteria compete with one another or otherwise go about their own business. In others, though, researchers suspect that the larvae are the primary, “intended” audience for the signal. In one remarkable case, Shikuma’s team has found, a biofilm bacterium called Pseudoalteromonas luteoviolacea produces molecular syringes that actively inject a metamorphosis-triggering protein into larvae of the tubeworm Hydroides elegans.

Many bacteria have syringe-like injection machinery, but this is the first time it’s been shown to play a role in animal metamorphosis. More commonly, it’s used to deliver a payload of toxins. Some bacteria, such as the one that causes cholera, use the toxins to destroy their host’s cells. Others use them for intermicrobial warfare.

The syringes are evolutionarily related to the proteins in the tails of viruses, known as bacteriophages, that invade bacteria. The viruses use the machinery to inject their genetic material into host bacteria — and at some point in the distant past, bacteria must have acquired the genes and put them to their own use.

Most bacteria deploy their syringes singly, just like phages do. But Pseudoalteromonas is strikingly different. Instead of a single syringe, it produces a structure bristling with several hundred. The bacterial cell builds the structure in a compact, folded configuration like a flat-pack piece of furniture. Then the cell bursts and the neat package unfolds, blooming into a hemispherical mass — the “death star,” as Shikuma likes to call it. (Only about 2.4 percent of the Pseudoalteromonas cells in a biofilm produce the death star, presumably for the collective benefit of the colony.)

Each syringe tube within this death star contains a protein called Mif1 that induces metamorphosis in Hydroides larvae. Most likely, the protein binds to a target inside the larval cell, since extracellular Mif1 has no effect. Shikuma’s lab is looking to see if Mif1 performs other functions, such as attacking other bacteria, but they haven’t found any yet, he says — and that failure, plus the elaborate nature of the delivery system, makes him think that Hydroides might be the death star’s intended target.

If the bacterium is going to such trouble to help Hydroides settle, that would suggest that it’s getting something in return, Shikuma says. He has yet to pin down what that benefit is, but he speculates that by luring Hydroides to settle, Pseudoalteromonas is helping to assure that its biofilm will be first in line to colonize the new surfaces — new habitat — that the growing body of the tubeworm will provide.

If he’s right, or if the bacteria gain some other benefit from the worms, that might change ideas about the balance of power in larval settlement. “People have thought the animal is in charge and the bacteria are just serving as passive cues from the environment,” says Shikuma. “But the bacteria could be benefiting from the interaction more than we realize right now.”

A model of the “death star” produced by the bacterium Pseudoalteromonas luteoviolacea. The structure is a hemispherical array containing dozens of molecular syringes that inject a protein into larvae of the tubeworm Hydroides elegans, triggering metamorphosis. Many bacteria use single molecular syringes, often for defense, but this much more complex system is the only one known to affect animal metamorphosis. (Credit: N.J. Shikuma ET AL/Science 2014)

Some other researchers aren’t ready to buy the idea. “I personally do not think the evidence is all there yet to really say it is an active participation,” says Brian Nedved, a larval biologist at the University of Hawaii who also works on Hydroides. Instead, Nedved thinks it’s more likely that the death star has some yet-undiscovered role in defending Pseudoalteromonas from competing bacteria. Nor is Mif1 the only factor involved. Other molecules can also trigger Hydroides metamorphosis through different mechanisms, says Nedved.

Shikuma, meanwhile, has found the same genes involved in building the death star in entirely unrelated kinds of bacteria — ones that are part of the normal microbial flora in the human gut. “It’s very curious that they’re there, and we’re intrigued to find out what the use is,” he says.

The US Navy is interested enough to fund his work, largely because knowing why larvae of critters like Hydroides settle where they do might lead to better ways to keep them off the hulls of ships. But the Navy is also intrigued by other, more futuristic possibilities, Shikuma says, such as figuring out how to load a death star with therapeutic drugs — for example, antimicrobial drugs that soldiers could someday take to prevent travelers’ diarrhea.

And there’s a bigger idea in play, too, says Suhelen Egan, an environmental microbiologist at the University of New South Wales, Australia, who studies the interactions between marine algae and bacteria. If Shikuma’s right — that marine larvae are not just eavesdropping on bacteria but are engaged in an active conversation — the same could well be true of many other ecological systems. And that could mean that microbial communities are much more tightly integrated with the higher organisms they live on and among than ecologists have previously acknowledged.

These interactions need not be intimate, one-on-one conversations, Egan notes. Instead, they could be more like a cocktail party, with a wide variety of participants interacting with a diverse range of partners in loose, shifting associations. No one knows yet, but the bizarre relationship between a hull-fouling tubeworm and death star bacteria provides a good place to begin learning.

Bob Holmes is a science writer based in Edmonton, Canada.