These species have dialects, babble like babies and even experience their own cultural evolutions of sound. 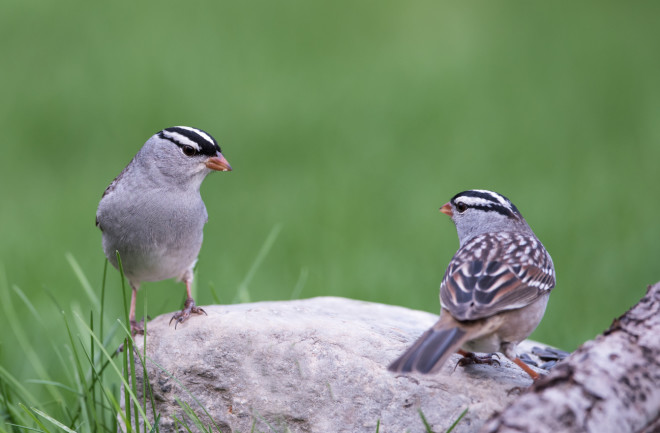 Because we learn to speak from nearby adults, our dialects diverge across geographic lines. It’s even possible to predict where a stranger was raised based on speech patterns alone. Southerners, for example, use “y’all” as the preferred plural of “you,” while South Philadelphians say “youse.” People from different eras also speak differently; you’d get strange looks if you walked around talking like Shakespeare.

But we’re far from the only species that boasts a range of vocal patterns. Sac-winged bats, for example, live across Mexico and South America and have distinct vocal styles across this range. When the female bats disperse to mate, they listen for calls that are similar — enough to indicate familiar food and pathogens — but not identical to those of the group they were born into. Similarly, in California, white-crowned sparrows living just miles apart will often sing different tunes; in rare instances, individuals living at boundaries between populations can even become bilingual, code-switching between dialects to match their environment.

In addition to dialects, these vocal learners share other human-like vocal patterns too: They babble like babies and even shift pronunciations over time. The similarities “let us look at processes that may be similar to human cultural change,” says Julia Hyland Bruno, an incoming assistant professor at the New Jersey Institute of Technology who studies songbirds. Since it’s difficult to ethically experiment on human vocal learning, these model systems are powerful mirrors — albeit simplified ones — into the development and evolution of our own culture.

Human babies babble. Before their first birthday, in fact, most are already producing “protophones” that are precursors to speech. Infants produce about 3,500 protophones per day, even when no one is listening. It’s probably a way for them to play and explore their vocal repertoire.

Songbird chicks also vocalize in a way that resembles babbling. Some species produce rudimentary “subsong,” which eventually morphs into adult song. Charles Darwin noticed this in 1871 when he wrote that early song “may be compared to the imperfect endeavor in a child to babble.”

Even baby bats babble. Sac-winged bats rhythmically repeat adult-like syllables and nonsensical proto-syllables — like a baby’s “ba-ba-ba.” It’s spontaneous, and adults don’t pay any notice, says Mirjam Knörnschild, a behavioral ecologist at Berlin’s Natural History Museum. When they’re not sleeping, the baby bats (called pups) spend 30 percent of their time babbling. “They have this very British way about them,” Knörnschild says, referring to the way they take turns without interrupting each other.

If you venture into the forest, she adds, there are so many babblers that you can’t miss them. Like humans, babbling pups are practicing for later vocalizations, but Knörnschild thinks they might also be playing: “I'm really curious if our bats feel better when they’re babbling.”

During the Great Vowel Shift from the 15th to the 18th centuries, English speakers began pronouncing vowels higher in their mouths. Before then, they pronounced “bite” like “beet,” “beet” like “bait,” and “bait” like “bot.” The sheer speed of the shift was astonishing. Word choice and grammar can change even more than pronunciation. By analyzing Twitter interactions, researchers estimated that for every 100 words we read, we begin using one more frequently. Of course, grammar rules and slang evolve even more quickly than that.

Like humans, bird vocalizations change with time, too. White-throated sparrows, for example, typically sing songs that end with a triplet. (Birders identify it as the Oh sweetCanada, Canada song.) But in the early 2000s, birds from Prince George, British Columbia started singing a new song that ended in a doublet: Oh sweet Cana Cana Cana.

“It’s audibly different,” says Scott Ramsay, an associate professor at Wilfrid Laurier University who studied the new song. He was stunned when he discovered in 2002 that every bird in Prince George sang the doublet song, but eastern birds in Ontario never sang it. The researchers confirmed this with a road trip from British Columbia to Alberta: The farther east they went, the less common the doublet song became, Ramsay says.

But over the next two decades, the song went viral. By 2019, birds from coast to coast sang the cana tune. Eastern birds probably picked it up on shared wintering grounds in Texas and brought it back to Ontario to teach their chicks. Ramsay isn’t quite sure why the song stuck around — maybe the rhythm is easier, he hypothesizes. Now, he and his colleagues are tracking a third song that’s emerging in western Canada. “It’s happening again,” he says, “and it’s spreading.”

In humpback whales, song change was even more rapid — so fast that researchers called it a cultural revolution. Eastern and Western Australian whales typically sing different songs; but between 1995 and 1996, two newbies arrived in the east singing the western tune. The song spread like wildfire, and by 1998, every single whale sang the new song.

In the years that followed, the west-to-east cultural transmission repeated itself — not just in Australia, but across the Pacific Ocean. Whales passed songs along for nearly 5,000 miles. Pods from French Polynesia sang tunes that were popular in American Samoa a year earlier, which they picked up from Australia the year before that. Like the Great English Vowel Shift, the speed and scale of the change was stunning.

Across time scales — from a bat’s babbling infancy to generational whale song shifts — vocal culture in animals parallels human speech. These similarities allow for “experimentation in emergence of vocal culture,” says Hyland Bruno. “We’re controlling the social interactions ... and then we’re letting the animals freely show us how they respond.”

Read More: How Does Your Dog Understand You?

The comparisons aren’t perfect; nobody wields language like humans. But studying animal vocal culture can pinpoint the unifying principles of learning that we all share.