Ancient Mars Was Wet and Wild 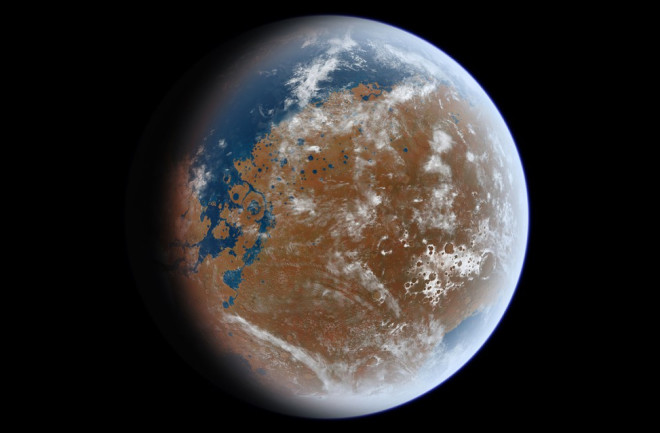 An artist's rendering of what a wet, ancient Mars might look like. (Credit: Wikimedia Commons) Not only was Mars once a wet planet. New evidence, published today in Nature’s Scientific Reports, paints a picture of violent tsunamis as well.

Tsunamis on Earth are often caused by earthquakes on the ocean floor or similar events. To an extent, that’s also what happened on Mars during both its violent events. But the initial culprits in this case were giant meteorites smacking the planet. The first meteorite, which delivered a head-on blow to Mars about 3.4 billion years ago, created a 30 km (18.6 mi) impact scar while catapulting waves hundreds of meters high across vast distances.

The proof — according to lead author Alexis Rodriguez , a senior scientist at the Planetary Science Institute — is in a series of strange water erosion lines. They don’t quite look like a shoreline — and indeed, these same lines were used to initially cast doubt on the theories of northern hemisphere oceans. But seen in a different light, they’re where a giant wave smashed into terrestrial portions, dragging away a backwash of rocks, boulders, and other geologic features.

A map demonstrating the effects two meteorites had on the surface of Mars, with the scars of ancient tsunamis seen today on the surface. (Credit: Alexis Rodriguez / PSI)

“As the wave moves up, it loses energy, then gravity pulls it back into the ocean,” Rodriguez says.

The second event is the really weird one. It happened between 3 and 15 million years after the first. In the interim, Mars became a much colder place. There was still an ocean, but portions of it were frozen over, with “glacier lakes” within the ice at some points. The ocean was likely very, very briny, from evaporation leaving salts behind.

“It was a time of change,” Rodriguez says. “The planet became much colder after the first tsunami.”

The second meteorite crashed in, about the same size as the first. It smacked into the ocean, pushing frozen, brackish water out in tsunami-like waves. But where the first wave was able to create a sort of “backwash,” the second one seems to have frozen in place. Indeed, the waves of that event lurk just below the surface of Mars today.

“As the wave propagates, it spreads out and becomes thinner, and that would accelerate the freezing process,” Rodriguez says.

It’s not an unprecedented occurrence. Rodriguez points me to a much more recent event that shows what he’s talking about. A video from 2013 captures when seismic activity triggered a tsunami-like flow of ice and frigid water across the wilds of Canada.

“That’s a proof of concept, that these flows happen on Earth,” he says.

The Mars data, taken from various orbiters including the Mars Global Surveyor and ESA’s Mars Express, paint a view of a world in upheaval. There’s solid evidence for these two tsunami events, but that doesn’t preclude more events yet to be discovered. Indeed, Rodriguez says they might have happened every few million years.

“The discovery of martian mega-tsunami deposits removes much of the controversy, which for decades surrounded the early Mars ocean hypothesis,” Rodriguez says.