An ‘Orbital Gateway’ Can Guide Comets to the Inner Solar System 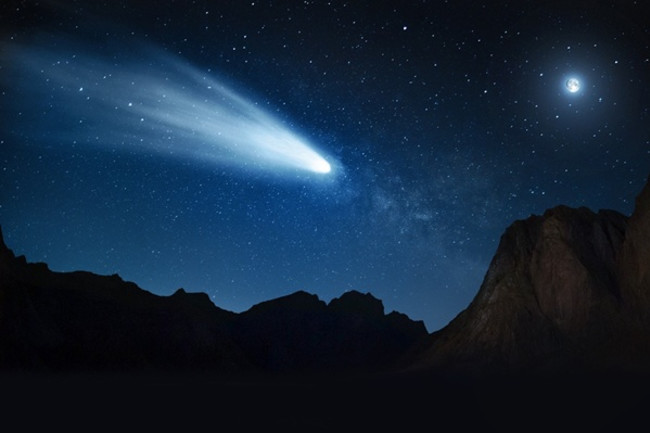 Centaur Schwassmann-Wachmann 1 has a chance to get funneled into the inner solar system in the not-so-distant future. This artist’s concept shows what the comet would look like if it were 0.2 AU (19 million miles, 30 million kilometers) from Earth. Note the Moon at upper right for scale. (Credit: University of Arizona/Heather Roper)

Astronomers have discovered an orbital region just beyond Jupiter that appears to act as a kind of gateway for some objects entering the inner solar system from the Kuiper Belt. The discovery may offer a solution to a puzzle that has long confused astronomers: How does a certain class of objects from the Kuiper Belt become comets?

Many comets take a straightforward path into the solar system’s inner regions. They come from the Kuiper Belt or the Oort Cloud – regions beyond Neptune containing millions of icy leftovers from the solar system’s beginning. Gravitational nudges send them plunging inward until whey swing around the Sun and out again.

The puzzle comes from space rocks called Centaurs. First discovered in 1977, these objects from the Kuiper Belt have been gravitationally jostled into unstable orbits between Jupiter and Neptune. Close encounters with one of the giant planets can send a Centaur back to the Kuiper Belt or out to interstellar space, or send it deeper into the inner solar system. As Centaurs come closer to the Sun they begin to develop comas, telltale signs of cometary activity.

Several Centaurs already do so, including the first one discovered, 2060 Chiron. Centaurs are likely the source of Jupiter Family Comets (JFCs), whose orbits are strongly influenced by the giant planet. However, researchers have long debated orbital pathway from the Kuiper Belt to Jupiter. How do they get from out there to in here. Is there a transitional region they pass through?

Now, astronomer Gal Sarid of the University of Central Florida and a team of researchers have identified what they call a “short-lived dynamical gateway.” It’s a region outside the orbit of Jupiter that the majority of Jupiter Family Comets pass through. It is also the location of two Centaurs. The best-known is 29P/Schwassmann-Wachmann 1, which acts like a comet with frequent gas and dust outbursts.

And their simulations provided another surprise for the researchers. “Centaurs passing through this region are the source of more than two-thirds of all JFCs,” co-author Maria Womack of the Florida Space Institute said in a press release. That makes this “the primary gateway through which these comets are produced,” she added. The simulations also show that Centaurs that eventually become JFCs do so within a few thousand years of entering the gateway.

The newly identified gateway region, said Sarid, is “a prime candidate to advance our knowledge of the orbital and physical transitions that shape the comet population we see today.”

The research was published yesterday in Astrophysical Journal Letters. A pre-print of the study is available at arXiv.org.