An Idea as Grand as the Ritz 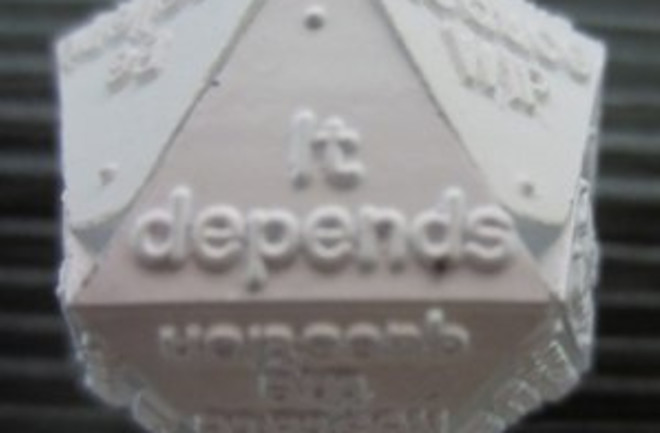 The core of a Magic Eightball. (from ginifab.com) I hadn’t thought, until a few days ago, when I was thumbing through Strange Beauty, about the origin of the word ritzy. It has become so ingrained in the language that it somehow sounds like what it means. I vaguely knew about the Hotel Ritz in Paris and the Ritz Carlton chain. These places were called that, I supposed, because they were ritzy. Actually it worked the other way around. There was a Swiss hotelier named César Ritz, whose original establishment was so chic and luxurious that a new superlative was coined. Much of the renown lay with the cuisine, prepared under the direction of Georges Auguste Escoffier, who became the preeminent French chef of his day. Escoffier, oddly enough, figures into the history of modern physics, though in a very roundabout way. In my previous post I introduced Murray Gell-Mann’s Eightfold Way, an elegant mathematical theory in which the bewildering mess of subatomic particles can be described as if each is one face of an abstract polygon -- an imaginary object that can be rotated in multidimensional space. Here is how I described the discovery in Strange Beauty:

As Murray worked out the equations, he marveled at the beauty of the architecture, this pattern unfolding in his mind. Using the eight operations allowed by [the theory], each particle could be converted into any of the others. Or, to use a different metaphor, there were eight "currents" through which the members of the group could flow from one into the other, assuming new identities. . . . Like the old child's toy called the Magic Eightball, each face displays a different message.

Hour after hour he played with these mental objects.

The ease with which the pieces were fitting together was exhilarating. Within days the whole scheme was in place. Murray called it the Eightfold Way. Not just because there were eight possible rotations and eight particles in each representation but because of a saying of the Buddha about the eight ways to achieve Nirvana: "Now this, O monks, is noble truth that leads to the cessation of pain; this is the noble Eightfold Way: namely, right views, right intention, right speech, right action, right living, right effort, right mindfulness, right concentration." Murray himself was in Nirvana. For years all these different particles had come raining down on earth or ricochetting from the blasts of accelerators. Where there had been confusion now there was hope of order.

He didn’t believe this had anything to do with the Buddha -- the name was a kind of joke. He quickly came to fear that his science itself was “crackpot.” It didn't help that his eightballs described some particles not known to exist. But before long experimenters discovered them in their particle accelerators, and the Eightfold Way became a triumph. What Mendeleev had done for the elements (which turned out not to be so elemental) Gell-Mann had done for the subatomic particles. But that was just the beginning. The mathematics he was using (called group theory) suggested that the polygons could be neatly decomposed into smaller pieces. Tap an eightball gently on the edge and it would shatter into smaller shards -- perfect mathematical gems called triplets. All of this was very abstract, and in the book I described the months that passed as theorists puzzled over the meaning. Just as Mendeleev's elements turned out to be made from smaller particles like protons and neutrons, could these pieces be further broken down? Could each particle consist of a triplet of three even more fundamental entities -- the true atoms of the universe? But how could a particle like a proton, with a charge of +1, be made from three smaller units? Particles with fractional charges seemed like an absurdity. Nothing like that had been observed. Maybe these “kworks,” as Murray called them, (he had the sound in his head before he found the spelling in Joyce) were just interesting mathematical figments. "It is fun to speculate," he wrote, "about the way quarks would behave if they were physical particles of finite mass (instead of purely mathematical entities). . . . A search for stable quarks . . . would help to reassure us of the nonexistence of real quarks." Those are my italics. He assumed these weird things would not be found.

Gell-Mann struggled for the words that would imperfectly describe his quarks, calling them not only "mathematical" but even "fictitious." One colleague interpreted Murray's maddening ambiguity like this: "If quarks are not found, remember I never said they would be; if they are found, remember I thought of them first."

He continued to hedge his bets. In 1967, when he and Richard Feynman -- "the hottest properties in theoretical physics today" -- were featured in The New York Times Sunday Magazine, Gell-Mann said quarks would likely prove to be "a useful mathematical figment." At a lecture at a physics summer school in Erice, Sicily, he said that quarks might well turn out to be "purely illusory, a passing phase in our description, which will go away after a while, when we will learn how to . . . solve our equations without using quarks." Meanwhile they served him as a “pedagogical” device, a calculating tool for extracting new insights about the implications of the Eightfold Way. In one talk he used fictitious triplets to construct a model of the strong nuclear force "which may or may not have anything to do with reality." After using this toy theory to abstract some general principles, he threw the field model away. When his friend Valentine Telegdi learned about the technique, he told Murray it was like one used by the French chef Escoffier: Cook a pheasant between two slices of veal. Then discard the veal and serve the pheasant. That to me is a testimony to Murray's brilliance, the ability to hold contradictory ideas in one's mind. Though be believed, deep down, that quarks lacked the solidity of electrons or even of neutrinos, the idea was too beautiful to let go of. He stuck with it, and before long evidence was found that pointlike particles indeed existed inside protons and neutrons A theory called quantum chromodynamics (Murray named it and was one of the inventors) went on to explain why the quarks never appear independently in the world -- why we don’t observe fractional charges. The nature of the strong nuclear force ensures that the quarks are permanently trapped, or "confined." With the existence of quarks established, Murray was soon insisting that he had believed in them all along. That was one of the reasons he was livid when my biography was published, providing ample evidence to the contrary. This is mostly a matter of interest to historians and philosphers of science, and I still wonder why he was so adamant and so angry. That initial ontological confusion was shared by most of his colleagues. It doesn't detract in the slightest from his accomplishment. He had made one of the most important scientific discoveries of the century. He was the Escoffier of particle physics. Please report typos and other neurological glitches by email or through Twitter. @byGeorgeJohnson Related: Strange Beauty web page For a glimpse of my new book, The Cancer Chronicles, please see this website.