America Has a Whole Lot of Potentially Active Volcanoes 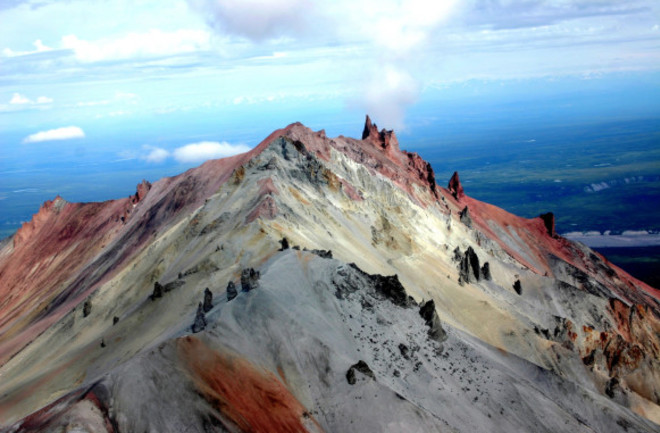 Eroded remains of a volcano in the Wrangell Volcanic Field, Alaska. Betts and Hannan/NPS | CC-by SA 2.0The Summer of Volcanoes continues! If you have any volcano questions you'd like me to tackle, tweet them to me (@eruptionsblog) with the hashtag #sofv or email me at the same user name on gmail. Today's question might help you figure out that late summer vacation you've been pondering.

Today's question is from Dale:

We've heard a lot lately about the hotspot under Yellowstone. And volcanic activity in the Cascades is well known. My question is where are other 'hotspots' in North America that have a potential for eruptions that aren't as well known or recognized?

This is a great question! Yellowstone and the Cascades do get a lot of the attention when it comes to North American volcanoes, but they are surely not the only places where we might find active volcanoes across the continent. Now, I can't highlight all the "hidden" volcanic areas in the United States, but I will talk about a few gems that most people don't realize are potentially active volcanic areas. You can check out the USGS Volcanic Hazard Program's map of the volcanoes it monitors (which includes the status of many of these volcanoes -- all green currently). Valles Caldera, New Mexico

The Valles Caldera, near Los Alamos in New Mexico, seen from Landsat 7 in May 2002. NASA Earth Observatory You wouldn't think that a caldera -- the largest volcanic landform created by an explosive eruption -- could be a "hidden gem". However, although many people have heard of Yellowstone or Long Valley, the Valles caldera in New Mexico is just as impressive as either of these behemoths. This caldera is part of a chain of geologically-young (less than 5 million years old) volcanic rocks across the Jemez Mountains. Valles had one of the largest known explosive eruptions in the last few million years: the famed Bandelier Tuff, which erupted ~1.25 million years ago and spread over 300 cubic kilometers of ash and volcanic debris over the Southwest. Since that massive eruption, smaller domes have formed, some as recently as ~40,000 years ago. It is new domes like these that are the most likely future activity (if any) at the Valles caldera. Clear Lake, California

Mt. Konocti, on the shores of Clear Lake in California. Erik Klemetti I've written about Clear Lake before in this space, but when people think about volcanoes in California, they tend to think of Shasta and Lassen and not this one in the middle of ... wine country? Yet, there it is, in the Coast Range, a mere 150 kilometers (~94 miles) from downtown San Francisco. Clear Lake has produced a number of small explosive eruptions (maars) and one decently-sized ash fall.

Konocti, last eruption ~11,000 year ago, sits on the shores of Clear Lake. Right now, the biggest hazard from Clear Lake is the constant seismicity that is a result of geothermal energy production. Although the last eruption from Clear Lake might have been thousands of years ago, the USGS considers its potential threat high.

Layers of volcanic debris next to a basaltic lava flow at Dotsero in Colorado. Jeffrey Beall / Flickr | CC-by-SA 2.0 I bet most people don't know that Colorado has experience volcanic eruptions in the last 5,000 years. Dotsero is a small volcanic field in north central Colorado sitting right on Interstate 70 near Gypsum. The volcanism at Dotsero is mainly in the form of maars, or explosive craters formed from the interaction between hot magma and water. The debris thrown out of Dotsero during its recent eruptions are full of the local (and much older) sandstone, which supports the idea that these volcanoes are formed from explosions just below the surface that blast rock (along with truly volcanic material) out of the ground. The area around Dotsero has also produced some small basaltic lava flows as well, betraying the likely heat source for these other maar explosions. These explosions seem to bring up material from the mantle as diamonds are also sometimes found at Dotsero. Black Rock Desert, Utah

Markagunt Plateau, part of the Black Rock Desert volcanic field in Utah. Lee Siebert, USGS/Smithsonian Institute The area of North America known to geologists (and others) as the Basin & Range is littered with volcanic features. Many of them are lava flows and cinder cones made when basalt leaks through faults created as North America stretches. Black Rock Desert, about 250 kilometers (155 miles) south of Salt Lake City, is one of these volcanic centers where lava made its way to the surface. The first eruptions from Black Rock Desert were actually rhyolite domes (the Topaz Mountains) that formed over 6 million years ago but the most recent basaltic lava flows happened only about 720 years back! Black Rock Desert also hosts Utah's youngest rhyolite eruption, the ~400,000-year-old White Mountain. Wrangell Volcanic Field, Alaska

A streak of older ash remobilized by strong winds on the summit of Wrangell in Alaska. Seen in 2007. Norma Traw/ USGS/AVO When people think of Alaskan volcanoes, it is the long chain that is the Aleutians that come to mind. However, in eastern Alaska there is a range of volcanic and tectonic mountains called the Wrangell-St. Elias Range. Isolated from the Aleutians, they volcanoes might be related to the subduction of a small tectonic terrane colliding with North America. What we do know is that they are still active. Wrangell itself is one of the largest composite volcanoes in the world and has produced lava flows that reached 58 kilometers (36 miles) from the volcano ... and Wrangell's last [albeit potentially questionable] eruption was only 85 years ago! Over the last few decades, intense steam vents on Wrangell have been confused with eruptions as well. The Wrangell-St. Elias Range is also home to the somewhat enigmatic source (possibly Churchill) of the White River Ash, twin eruptions in ~850 and 60 AD that rank as some of the largest in the last 10,000 years. Kookooligit Mountains, Alaska

The snow-covered Kookooligit Mountains on St. Lawrence Island in Alaska. Seen by Landsat 8 on June 17, 2015. USGS-NASA (processed by Rob Simmon) If you think the Wrangell-St. Elias range is remote, then Kookooligit Mountains will change your mind. On St. Lawrence in the Bering Strait, the Kookooligit Mountains are actually a large shield volcano with over 100 smaller cinder cones on its surface. Think of it like the Alaskan equivalent of a place like Mauna Loa or Piton de la Fournaise ... except that it likely wasn't formed due to a hotspot like those volcanoes. No one is quite sure why there are volcanoes in this stretch of the Bering Strait (one possibility is reactivation of strike-slip faults), but the Kookooligit Mountains are far from extinct. The last dated eruption in the last 25,000 years but many of the features on the volcano look much younger than that. Diamond Craters, Oregon

Malheur Maar (right) and pahoehoe lava (left) in Diamond Craters, located in central Oregon. Ian Poellet / Wikimedia Commons | CC-by-SA 4.0 Oregon is another state dominated by the Cascades, but as you head east across the state you reach what is called the High Lava Plains, an area of bimodal volcanism where basaltic lava flows and rhyolite domes have erupted over the past few million years. The eruption that formed much of Diamond Craters, ~60 km (36 miles) southeast of Burns, happened ~7300-7700 years ago and covered ~60 square kilometers (23 square miles) with basalt lava flows and volcanic debris. What makes Diamond Craters stand out is all the doming and collapse features across the volcanic field, suggesting that as the eruption progressed, parts of the land surface lowered like we saw at Barðarbunga in Iceland recently. Uinkaret Volcanic Field, Arizona