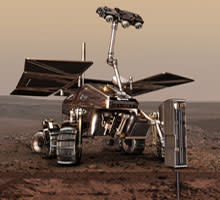 In a setback to Europe's space program, the European Space Agency's flagship mission to Mars will be delayed three years while the space agency tries to cobble together funding for the ambitious rover, the ExoMars. The mission had already been postponed once and was most recently scheduled to launch in 2013, but cost overruns are forcing the space agency to push back to a launch date in 2016.

Approved by space ministers in 2005, the rover was supposed to be a fairly small venture costing no more than 650m euros. But as the project developed, it was decided the endeavour should be upgraded, to provide a bigger, more capable vehicle; and one that could carry a much broader range of science instruments [BBC News].

The ExoMars is slated to include a drill that can bore down two meters into the icy soil, and is expected to search for evidence of Martian life, past or present. However, the rover's scientific ambition pushed costs up to the current estimate of 1.2 billion euros, and Italy, the mission's lead financier, has refused to meet those costs. Thus far, no other nation has stepped forward to pick up the tab. Agency officials say that postponing the launch may bring down costs or could give the ESA time to find other partners.

Fixing the later date will permit project managers to run Enhanced ExoMars less like a crash program, where costs are often under pressure. It also gives them more time to reach formal agreements with NASA and the Russian space agency, Roskosmos, on possible contributions to the rover payload and other mission elements [SPACE.com].

However, NASA is grappling with its own budget troubles regarding the over-budget Mars Science Laboratory, and may not be eager to take on more funding responsibilities. ExoMars scientist Andrew Coates said he's disappointed with the delay, but added that it's preferable to scaling back the rover's scientific mission to cut costs.

"ExoMars is going to the heart of one of the most significant questions for mankind - it's all about looking for past or present life beyond Earth, and that has to be done properly. The excitement of this mission will be worth the wait" [BBC News].