A fleet of tiny probes could reach the nearest star system within our lifetime. 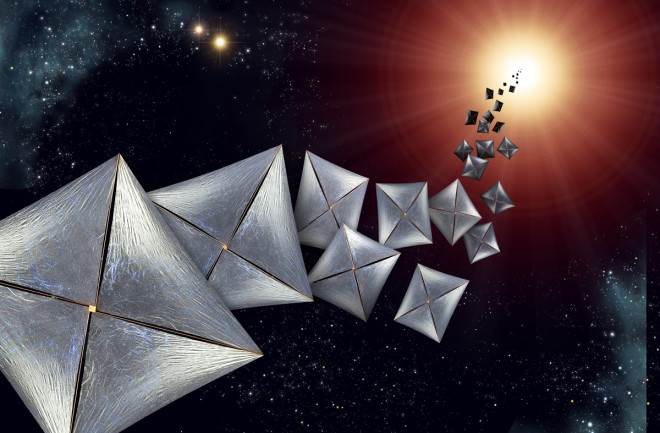 “For the first time in human history, we can do more than just gaze at the stars,” declared philanthropist and high-tech entrepreneur Yuri Milner on April 12. “We can actually reach them.”

Milner, a Russian native, was named after cosmonaut Yuri Gagarin, who exactly 55 years earlier became the first man in space and the first to orbit Earth. Milner was hoping to bring another historic first to fruition. At a press conference held atop New York City’s One World Trade Center, he unveiled Breakthrough Starshot, a program with a bold agenda: to launch, within 20 years, a fleet of spacecraft that would within another 20 years reach the nearest star system, Alpha Centauri, 4.37 light-years away.

Milner wasn’t just talking a good game; he was backing it with his own money, $100 million in research and development funding to demonstrate the feasibility of this wild idea. It might take another $10 billion to pull off the actual mission, but the main point Milner stressed during the press conference was that such an endeavor is within our grasp, assuming reasonable improvements in existing technology.

He also brought along some heavy hitters to help make this case, including cosmologist Stephen Hawking, former astronaut Mae Jemison, Harvard University astrophysicist Avi Loeb and former head of the NASA Ames Research Center Pete Worden. “Today,” Hawking said, “we commit to the next great leap into the cosmos, because we are human and our nature is to fly.”

Reaching for the Stars

The enterprise got a boost on Aug. 24 when astronomers at the European Southern Observatory in Chile announced the discovery of an Earth-like planet orbiting Proxima Centauri, one of three stars in the Alpha Centauri system. “This announcement provides even more motivation for our mission,” claims Worden, who left NASA in 2015 to become executive director of the Starshot program. “Today we can make a better case for Starshot than we could have just a month ago.”

While the excitement among Milner, Worden and their peers is palpable, they are not ignoring the immense technological issues that lie ahead. Yet two key ideas at the heart of this plan make the sci-fi dream of interstellar travel scientifically plausible. The first is limiting the spacecraft’s size so it weighs just a gram or two, allowing it to accelerate to unprecedented speeds. That strategy would, of course, require leaving people behind and going strictly robotic. The second idea is to leave the fuel behind as well, and propel the spacecraft solely with light. (Although photons are massless, they can still impart momentum.) This approach contributes to the goal of attaining speeds far beyond what conventional, chemical-powered rockets could ever muster.

The general concept of sail-bearing spacecraft — akin to the clipper ships of old, hurled across the seas by wind — is not new. Johannes Kepler alluded to this prospect in a 1610 letter to Galileo: “With ships or sails built for heavenly winds, some will venture into that great vastness.” While the physicist and sci-fi writer Robert Forward further developed the idea in the 1960s, it remained far from practical implementation.

During the media announcement, Milner cited recent critical advances that make sailing to the stars conceivable. Thanks to the dramatic decrease in the size of microelectronic components, researchers can now create suitably tiny space probes equipped with cameras, a power supply and navigational and communication capabilities. These “nanocraft” would be attached to ultrathin sails about a few square meters in area and weighing a few grams.

A conventional rocket would carry hundreds to thousands of these nanocraft into space, releasing them into high-Earth orbit. Then a ground-based laser array with a combined capacity of 100 gigawatts of peak power, spread out over a dry, high-altitude site like Chile’s Atacama Desert, would zap each sail, one at a time, for a few minutes. This would cause each wafer-like probe to accelerate to 20 percent of the speed of light (or about 134,000,000 mph) — about 1,000 times faster than today’s fastest space vehicles. The diminutive space probes would be inexpensive and, therefore, expendable; some could be lost due to technical glitches or collisions with space junk without jeopardizing the entire mission.

It may sound crazy, but this plan might work. The stars could be within our grasp, as Starshot enthusiasts claim — although it will still take tremendous progress to get there.

From Dream to Reality

So how close is this project to an actual liftoff? Of the three technologies central to the effort, the space probe is the furthest along. At the April announcement, Milner held up a small wafer — less than 2 square inches in size and roughly 4 grams in mass — that can already meet many of the critical specifications. Designed by Harvard researcher Zachary Manchester, about half the wafer consists of a solar cell for generating electricity, and the rest includes a small microprocessor, a radio transceiver and magnetometer, and a gyroscope for navigation and orientation. It’s all built from off-the-shelf components at a cost of about $25. “The world’s smallest satellite,” Manchester calls it, “and probably the cheapest, too.”

He hopes to get 100 of his satellites into space later this year, courtesy of a NASA educational program, to test radio communication methods in space. For future experiments, he wants to add more functionality to the probes using cameras, while eventually trying out laser communications techniques. “Zac’s work was one of the key things that convinced Yuri and me that this might be feasible,” says Worden.

Other aspects of this venture, however, are further from realization. That includes the proposed laser array, consisting of a large number (thousands, if not millions) of modest-sized ground lasers all pointed at a minuscule target, thousands of miles in the sky. “No one has ever done this on the scale we’re talking about,” says Philip Lubin, a physicist at the University of California, Santa Barbara. But there are no fundamental physics barriers, Lubin adds, “and there is now a credible path forward.”

It’s a tricky problem, nevertheless. “For an array of one or several square kilometers, a laser on one side would see a different atmospheric density than a laser on the other side,” explains Harvard astrophysicist James Guillochon. “We would need to correct for all of those differences.” Furthermore, Guillochon notes, the laser light hitting the sail has to be exactly on target. “You want an even distribution of energy on the sail so it doesn’t deform.”

This leads to what may be the plan’s foremost challenge: coming up with a sail of a few square yards that’s sufficiently strong, thin and lightweight. It also has to be highly reflective and absorb less than 1/100,000 of the incoming light so that it doesn’t melt. While no material yet devised meets all of the technical requirements, researchers have made progress on individual parts of the problem.

How Far Away Is Interstellar Space?

After being sped up with laser beams, the Starshot probes would coast for the next 20 years, although it wouldn’t be smooth sailing. The nanocraft would face additional obstacles, primarily in the form of dust and gas encountered en route to the Alpha Centauri system.

Princeton astrophysicist Bruce Draine estimates that the small spacecraft would sustain about a million collisions per square centimeter with dust grains during the journey — each one potentially a disaster at those speeds. Fortunately, there are ways of mitigating the damage. A beryllium or graphite coating could protect the electronics, and as another precaution, researchers could reduce the number of collisions by folding up the sail after the nanocraft is beyond the reach of Earth-based lasers. The craft could also be directed to fly sideways, led by its thin edge to present less of a target.

Worden hopes to sponsor a series of space experiments of increasing complexity in the coming years. Early experiments would involve solar sails, pushed strictly by sunlight, which have flown before. Others would involve pushing sails with lasers, which has not yet been done. “There’s a whole range of things we hope to do,” Worden says, “and we’ll build up gradually over time.”

There will be a lot to see along the way. Rather than being focused on a single destination — Alpha Centauri’s stars — this program, says Worden, “is really about a journey.”

We’ll start by exploring our own backyard, the solar system, and move on from there, says Loeb, who heads the Starshot advisory committee. After all, he notes, the tiny probes “can reach Pluto in three days, rather than the 9.5 years it took New Horizons to get there.” The program could sacrifice some of the multiple probes, he says, sending them “very close to targets we’re interested in. For example, we could fly through the plumes [of Enceladus] and see if we could detect the fingerprints of life.” The probes could also fly through the rings of Saturn or other harsh environments.

“With cheap, fast spacecraft,” says Guillochon, “we could send one out to every asteroid in the asteroid belt or to every Pluto-like object in the outer solar system. With these small craft ready to launch, we could have hundreds of missions, each of them to a brand-new, never-before-seen world.” Speaking of new worlds, he says, “If Planet Nine exists, this would be one way to get there quickly.”

There is no timetable set for missions like this, but if all goes according to plan, after 20 years of practice within the solar system, scientists may finally be ready for the first extra-solar target, the Alpha Centauri system. It has three separate stars to survey. Proxima Centauri is the nearest, and the other two, Alpha Centauri A and B, are similar to our sun in mass and luminosity.

What might a space probe see when it gets there? Proxima’s planet, dubbed Proxima b, is an obvious target. The rocky world of roughly Earth’s mass is in a tight orbit around its dim star, located in its “habitable zone.” Liquid water, and thus possibly life, might exist on its surface. There’s also an unconfirmed planetary sighting near Alpha Centauri B.

University of Colorado astrophysicist Webster Cash, meanwhile, is trying out an innovative technique to see such planets directly. Cash, who participated in a Starshot workshop in April, is reflecting light from a telescope on Arizona’s Kitt Peak to a smaller, secondary telescope 1.5 miles away. In between, he’s placed a screen called a starshade to block the light of a test star to detect dimmer planets orbiting it.

“The Starshot mission,” he says, “helps motivate those of us who want to look for planets; if and when we find planets, that will really motivate the mission. And that’s the whole idea — to get everything moving forward.”

So, barring any setbacks, the first Starshot spacecraft would hopefully approach the Alpha Centauri system sometime around 2056. It would keep flying past, having no means of slowing down. Ideally, the probe’s instruments will gather information about the newly found planet and relay it back to Earth, using the sail as an antenna to facilitate transmission. Even traveling at light speed, that data would take more than four years to arrive, a wait that no amount of technology can lessen.

It’s an ambitious undertaking, to be sure, and success is not guaranteed — but where space travel is concerned, when is it ever? “We’re kind of where we were 40 years ago with gravity wave detectors,” Worden says. “People wondered if we could ever do this. It took decades, but they gradually made it work.”

Starshot could be similar, he hopes. It wouldn’t be the first time a giant leap began with a seemingly small step.