The clump of gas ALMA spotted, about as long as the distance between the Sun and Jupiter, may one day become a fully-fledged planet. 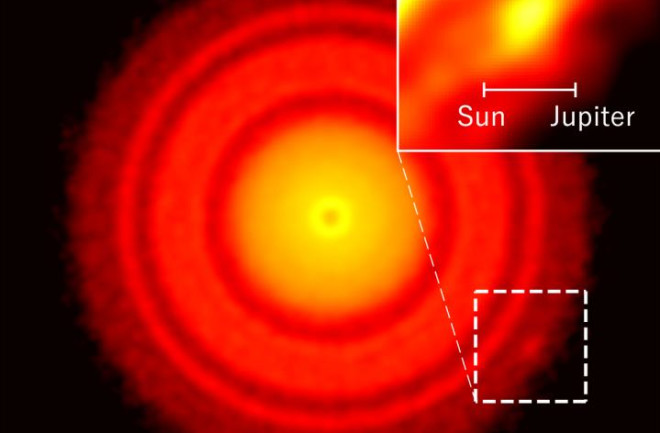 Stars in the early stages of their lives are surrounded by flat disks of dust and gas, spinning slowly around them. Over time, this material clumps together to form planets, or eventually gets blown away by the stellar wind. This process can take millions of years, so astronomers don’t have a way to watch it from start to finish. But by imaging the disks around many of these young stars, astronomers hope to get a snapshot view of the various stages of planet formation.

Now, by studying TW Hydrae, a young star located less than 200 light-years from Earth, astronomers think they’ve found a planet in the very earliest stages of its life. It’s marked by a large, diffuse blob of gas orbiting at the edge of the otherwise well-ordered disk of material. Researchers led by Takashi Tsukagoshi from the National Astronomical Observatory of Japan reported their observations June 6 in the Astrophysical Journal Letters.

Because the disks around these young stars are relatively cool, they don’t shine much in visible light. However, they do glow in radio waves, making the ALMA radio array, located in Chile, a specialist at finding such objects. With its 66 networked dishes, ALMA can take detailed pictures of the radio sky, zooming in on the disks around individual stars and imaging fine details.

But the blob is at odds with some parts of astronomers’ theories as well. For one, it’s strange that a disk should form just a single proto-planet. Models and studies of other systems indicate multiple planets forming at the same time are more likely. Also, these proto-planet blobs are expected to be more rounded, instead of the distended shape found within TW Hydrae’s disk.

It’s possible the baby planet is merely a spinning vortex of gas, similar to a hurricane forming in the gases of Earth’s atmosphere. Or maybe astronomers are truly seeing the very first stage of planet formation for the first time.

Tsukagoshi and his team plan to revisit the star system with ALMA and other telescopes, like Japan’s Subaru, to measure the temperature in the disk and look for more clues about their potential baby planet.