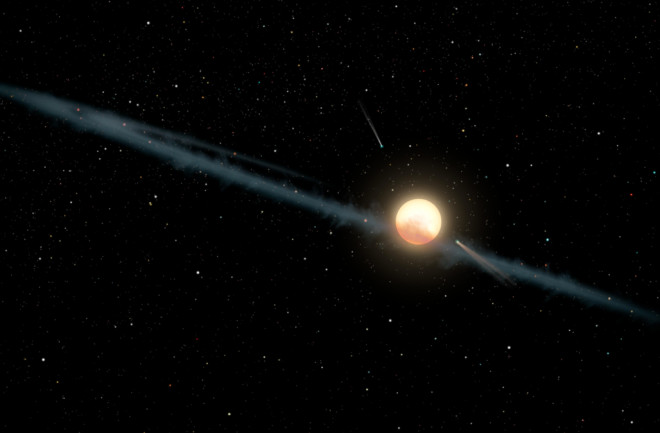 An artist's concept of a ring of dust orbiting Tabby's Star. (Credit: NASA/JPL-Caltech) We can probably put our hopes of meeting aliens on hold just a little bit longer. A team of researchers studying "Tabby's star," a stellar object whose mysterious dips in brightness have puzzled scientists and enthralled space enthusiasts, has announced that the most likely explanation for the behavior is a cloud of fine dust circling the star—wah, wah. That conclusion is the result of a crowdfunded observational campaign that ran from March 2016 to December 2017, and which caught the telltale fluctuations in brightness on four separate occasions.

Tabby's star, officially named KIC 8462852, has been known about for over a century, but it wasn't until 2015 that it really caught the public's attention. Tabetha Boyajian, a Louisiana State University astronomer and the source of its nickname, published a paper analyzing data from the Kepler exoplanet-hunting mission that documented massive, irregular dips in the star's light output. Dips by themselves aren't necessarily weird — it's how Kepler looks for exoplanets crossing in front of stars — but one of the dips dimmed the star by 22 percent, far too much to be a planet. Brightness fluctuations that are a result of orbiting bodies usually occur in regular intervals too, but Tabby's star dimmed unpredictably. While rumors of an alien megastructure, like a Dyson Sphere, began circulating, astronomers also came up with a multitude of more prosaic reasons for the star's behavior. A swarm of comets, debris from a planetary collision, a collection of asteroids trailing a planet or processes occurring inside the star could all be responsible for blocking the star's light, the experts hypothesized. To determine what was really happening, though, more observations were needed — a whole lot more. So, to raise the money for dedicated observing time on a host of telescopes around the world, Boyajian turned to Kickstarter, where her fundraising campaign ended up garnering over $100,000 in donations. The funding allowed her and her team to secure time on the Las Cumbres Observatory Global Telescope Network, a collection of telescopes around the world that conduct nightly scans of the sky. It was the first time that the star's dips were observed as they happened, researchers say, something that allowed them to quickly rally other telescopes around the world to gather additional observations.

Peering Into A Mystery

The goal was to observe more dips in brightness, as well as to probe the star's light output across the visible spectrum and in infrared, to see if different wavelengths were being blocked at different times. Watching how light filters through a cloud of dust or ice reveals their composition, and the data could help clear up some of the mystery. Their paper was posted Wednesday to the preprint server arXiv. The four dimming events that occurred between May and December of 2017 varied considerably in in how quickly they appeared and disappeared, although most dips in light were smaller than two percent. Analyzing the light that they could see revealed that whatever was in the way wasn't stopping all of the light every time — some wavelengths made it through while others were blocked to a greater or lesser degree. The discovery tips the evidence in favor of a large cloud of very small dust particles occasionally obscuring the star, the researchers say, as a solid object like a planet, or a Dyson Sphere, would block light entirely. The work isn't done yet though, the researchers emphasize. They'll continue observing Tabby's star for months to come in the hopes of catching further dimming episodes to study and flesh out their hypotheses about its behavior. Where the dust comes from is still very much a mystery, as well as why it's not evenly spread out in a ring around the star. Even if it's not aliens, don't worry. Tabby's star is still plenty exciting.