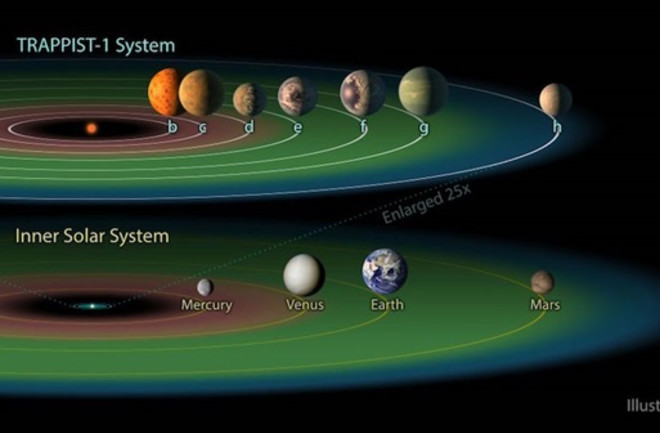 The 2015 discovery of the TRAPPIST-1 system, with its seven Earth-sized planets, has redirected much of the exoplanet search toward M-dwarf systems — and justifiably so. Based on Kepler data, researchers estimate M-dwarfs (the most common type of star) host around 10 billion Earth-sized planets in the Milky Way alone. But one question that immediately pops up regarding the search for exoplanets is that of habitability. In addition to other criteria, the presence of an atmosphere is crucial for life as we know it to exist.

One direct way to measure potential exoplanet habitability is to estimate the fierceness of a host star’s stellar winds, and then determine how well the surrounding planets’ can retain their atmospheres against these winds. And this is exactly what the authors of a study published in the Proceedings of the National Academy of Sciences have done.

Adapting the Alfvén Wave Solar Model (AWSoM) — a sophisticated computer model that has been used to simulate the solar corona in the past — researchers have calculated the amount of atmosphere being stripped away from the planets in the TRAPPIST-1 system. And considering its relatively small amount of atmospheric loss, the system’s outermost planet, TRAPPIST-1h, may have the most stable atmosphere of any of its siblings. Out of the planets that live in TRAPPIST-1’s habitable zone (e, f, and g), g is shown to be the most likely to retain its atmosphere for longer periods of time. These conclusions were drawn based on a variety of factors, some of which include temperature and flares of the host star.

Because TRAPPIST-1 is a much older star than our sun (7.6 billion years old versus 4.5 billion years old), the former system is considerably hotter. “Until a star runs out of fuel, the star actually gets hotter with time (and not cooler),” explains Manasvi Lingam, a postdoctoral student at Harvard-Smithsonian Center for Astrophysics and one of the authors of the study. “Hence, TRAPPIST-1 won’t cool down because it has not run out of fuel yet — this will happen after nearly 12 trillion years from now (i.e. around 1,000 times longer than the sun’s total lifetime).”

While Earth’s magnetic field shields us diligently from the sun’s flares, according to the study, the situation around TRAPPIST-1 isn’t quite as rosy. In a system as small as TRAPPIST-1, it’s no surprise that the flares are incessant — and there is little that the planets can do to protect themselves.

“Theoretical models suggest that the magnetic fields of the planets will not fully protect them from the harmful effects induced by stellar flares, unless the magnetic fields [of these planets] are hundreds of times more stronger [sic] than that of Earth,” said Dr. Lingam.

The study also shows that TRAPPIST-1b — the innermost TRAPPIST planet — might be interacting magnetically with its host star, an occurrence that is not experienced by our planets due to large star-planet distances.

In addition to having the power to start/modify the stellar dynamo, magnetic interactions could theoretically lead to superflares. These extremely strong stellar explosions can be up to 10,000 times more powerful than solar flares. “However, observational evidence is scanty, but it’s possible that TRAPPIST-1 represents an excellent ‘laboratory’ to test such theories in greater detail with future telescopes,” says Lingam.

While all these factors play against the TRAPPIST planets’ potential for habitability, ionospheric profiles suggest that below an altitude of 125 miles (200 kilometers), the planets’ atmospheres are unaffected by stellar winds. The upper layers act as a buffer, leaving the surface largely unsullied.

While that is definitely good news, we’ve got to cover all bases. If stellar winds do blow away planets’ atmospheres, can they be revived?

Turns out, they can. All they need to have is a few hundred volcanoes and geysers keen to blow up. These eruptions can spew gases back into the atmosphere, replenishing it. While it has occurred a few times in Earth’s history, we are yet to hear from the TRAPPIST system.

“Unfortunately, not much is known about the history of outgassing even on Earth and Mars, let alone exoplanets. This is one important question that remains unresolved,” Lingam said.

In regards to the potential of life in the TRAPPIST system, most people are inclined to rule out planets b, c, and likely d (too close to their host star), as well as h (too far away). This leaves only e, f, and g in the habitable zone. Adding to the equation the scorching temperatures, persistent flares, and arbitrary dynamo changes, the TRAPPIST planets clearly have a tough battle to win.