It's natural to worry about contamination from aliens, but who worries about sheltering them from us? 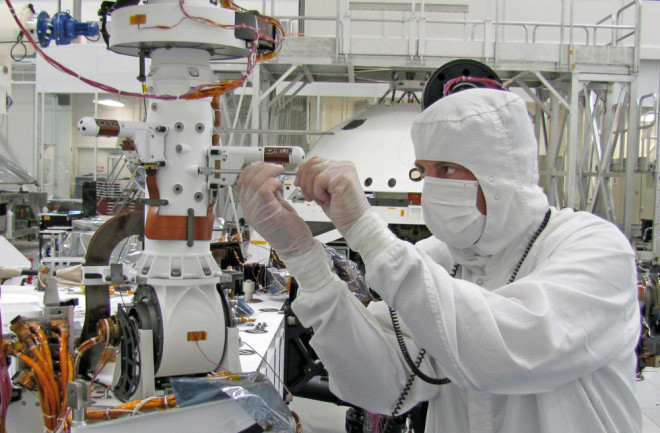 Despite modern clean rooms (above) and protocols, about 150,000 microbes traveled abroad Curiosity, possibly including the hardy Serratia liquifaciens. | NASA/JPL-CalTech

When Catharine Conley started her job at NASA, her predecessor gave her a pair of dark Ray Ban sunglasses. It’s only fitting — Conley is a real-life version of the famously shaded title characters in the 1997 movie Men in Black. Part of her job as planetary protection officer is to keep Earth safe from alien life. But, as far as we know, Earthlings are the ones regularly hopping around the solar system, so most of her job is to protect aliens from the human race.

When humans — or our robotic stand-ins — travel to new places, we take more than we think with us. It’s nothing new; biological stowaways have been hitching rides on terrestrial voyages for centuries. Christopher Columbus’ trip to North America brought deadly diseases that wrought havoc on the Native Americans. In the 1800s, British rabbits were released into the wild in Australia, and they’ve been a multimillion-dollar nuisance to farmers ever since. And the winding, climbing kudzu plant, native to Japan, chokes other plants in the Southern U.S. “We have enough experience on Earth to know that unexpected things can happen,” Conley says.

With the launch of the Russian satellite Sputnik in 1957, and the promise of traveling into outer space, came the realization that if anything were growing out there, our arrival might upset its biology. A space-age species invasion could damage not just alien organisms, but also the opportunity to study them properly. Most benignly, spacecraft stowaways could make for a tough sorting game — is this creature an Earthling or Martian? — or be mistakenly identified altogether. Worse, Earth organisms could infect or kill the alien ones that we went through so much trouble to visit.

In 1958, the International Council for Science formed the Committee on Space Research (COSPAR), whose objectives include protecting other planets from accidental invasion by us, plus whatever tagged along with us. Today, each major space agency has a scientist assigned to look out for the well-being of potential alien life. Conley is NASA’s.

Get a Space Life

Being a champion of aliens’ rights wasn’t exactly the career Conley planned for, even though she’d always felt a connection to space. (Her mathematician father, a consultant for NASA, actually had her run in circles in the backyard with her brother to help map orbits.) In college in the 1980s, Conley briefly studied physics, but was soon lured away by a fascination with the living world.

Even though Viking landers didn't detect any life on Mars in 1976, scientists remain concerned about "infecting" the Red Planet with stowaway Earth microbes. | NASA

Meanwhile, space exploration continued, with its own biological focus: The Viking landers arrived on the Red Planet in 1976. Martian fever was at its peak, and hopes for finding life-forms were high, as was concern that we might destroy or “overprint” them, erasing any record of their origin. A full 10 percent of the Viking mission’s cost went to making sure the lander didn’t bring any stowaways. Every component was baked in an oven at a few hundred degrees Fahrenheit, assembled in a clean room and shipped to the launch pad in a “bioshield.” The Viking probes’ cleaning was largely in vain: They arrived on the planet and reported that Mars is not overgrown with life. Instead, it turned out to be harsh and hostile.

But that doesn’t mean you can count life out. If there’s anything Conley’s education — culminating with a Ph.D. in plant biology — proved to her, it was the tremendous range of life on Earth. She didn’t know it, but she was training for her eventual job when she investigated the limits of that range.

Those limits are often surprising. Her postdoctoral work, on the proteins used in movement, brought Conley to the NASA Ames Research Center in California, where she designed an experiment for space shuttle Columbia, studying how tiny worms called nematodes adapt to zero gravity while in orbit. Unfortunately, it was not to be, since Columbia disintegrated while re-entering the atmosphere in 2003. But Conley learned that her worms survived the disaster. Amid the tragedy, she saw firsthand that life can endure in unexpected ways. The experience made her uniquely qualified for her future job, she says.

In 2006, she arrived at NASA’s D.C. headquarters to spend a year with then-Planetary Protection Officer John Rummel to learn the administrative side of astrobiology work: how to plan and oversee elaborate projects and allot research money. But shortly after she arrived, Rummel was promoted to senior scientist for astrobiology. “This left me more or less holding the bag for planetary protection, and so I stayed on,” Conley says. It’s a job that’s big and important, even kind of glamorous, but “it takes a fairly unusual combination of skills,” she explains.

Despite modern clean rooms (above) and protocols, about 150,000 microbes traveled abroad Curiosity, possibly including the hardy Serratia liquifaciens. | NASA/JPL-CalTech

From her office in Washington, Conley now delegates funding to planetary protection projects, worries over COSPAR regulations, develops policy and has a hand in every single piece of equipment that NASA launches toward a planet or asteroid. Sometimes, protecting the aliens is easy: Anything headed to a place too cold for Earth life to “wiggle its molecules around” — such as Saturn’s cratered moon, Dione — has virtually no COSPAR requirements to clear. The same goes for asteroids, which are overexposed to harsh solar radiation. But Mars, despite Viking’s assessment, still hints at life: Scientists imagine a possible world of microbes, squirming around, waiting to be discovered. Conley’s biggest concern is that Earth life could ruin any opportunity to learn about such creatures. We need to protect those potential Martians, but doing it right costs money. Thoroughly cleaning the latest Mars rover, Curiosity, cost $10 million. (The mission total was $2 billion.) To Conley, of course, it’s a worthwhile bargain.

Not everyone agrees. In summer 2013, Cornell astrobiologist Alberto Fairen wrote an editorial in Nature Geoscience, voicing concerns that had crystallized with Curiosity’s launch. Fairen thinks that without the cost of cautious planetary protection measures, NASA could do even more to search for other organisms. Unnecessarily strict standards are preventing us from finding Martians, he says; we’re so worried about them that we’re avoiding them altogether. Plus, the whole issue of sterilizing our probes is moot. “We know for sure that we have already brought microorganisms to Mars,” Fairen explains. Despite Conley’s efforts, clean-room swabbing revealed some 150,000 heat-resistant microbes hitched a ride on Curiosity — a relatively small number, but still greater than zero.

Most were probably killed en route to the Red Planet. But, “given that some survive, what is likely to happen from that point on?” asks Andrew Schuerger, a University of Florida biologist who gets funding from Conley.

Schuerger tests how well Earth microbes survive in Martian conditions. The single-celled organism Serratia liquifaciens turns out to be spectacularly hardy, surviving in the harshest of environments. Weirdly, it’s also very common: It’s been spotted in ponds, on plants, even everyday cheese. It could be in your mouth right now, and — dead or alive — it has certainly hitched rides to Mars. If it made the trip, all it needs to survive is some water and some form of protection from the harsh ultraviolet sunlight — “an umbrella and a cold drink,” as Conley puts it. It’s harmless for us, but S. liquifaciens could be bad news for any native species.

Still, exploration is about pushing the limits, right? Someday, humans will go to Mars, and “you can’t sterilize a human,” Fairen argues. We’re so intertwined with microbes that biology writer Ed Yong describes himself as “trillions of microbes in a human-shaped sack.” But even so, Conley says, we can take precautions.

For now, she does a lot of traveling here on Earth, visiting other NASA labs or one of her international counterparts. When she tells her plane seatmates what she does, some understand. Some express interest or approval. Others worry that regulations might get in the way of doing science. And the rest? “About 10 percent of people are gung ho manifest destiny,” she says. We’re supposed to be able to go wherever we want, without caution, and to heck with the native species.

To Conley, that’s as unnerving as any multi-eyed CGI alien Hollywood could dream up: We explore other planets not just to add pins to a map, but to understand what else nature is capable of. What’s the point of searching out alien life if you bring your own?

[This article originally appeared in print as "Alien Protection Plan."]