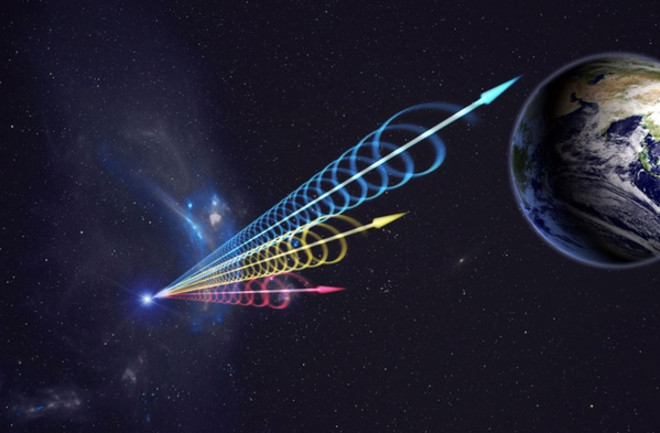 Blazing across the sky for mere milliseconds, fast radio bursts (FRBs) are among the newest and most puzzling astronomical phenomenon. They come from extreme distances and appear without any known rhyme or reason, making them almost impossible to study in detail.

But luckily, artificial intelligence is helping researchers learn about this mysterious occurrence. By using machine learning technology, a team of astronomers was able to study 72 new radio bursts blasting from FRB 121102 — the only FRB known to continually shoot out signals. Their findings, accepted for publication in the Astrophysical Journal, give insight into the radio waves’ periodicity and specific frequencies, but unfortunately leave us with more questions than answers.

FRBs are quick bursts of radio waves, each lasting for only a few milliseconds, coming from far outside the Milky Way. They first came onto the scene in 2007 when astronomy professor Duncan Lorimer, and his student David Narkevic, detected a 5-millisecond flash of radio waves zooming past the Small Magellanic Cloud, but they couldn’t figure out where it came from or what caused it.

Researchers have since detected many more FRBs, but their origins remain a mystery to this day. There’s reason to think they blast from energetic supernovas, or are ejected during neutron star or black hole mergers. Some even like to speculate that they’re artificial signals coming from distant, intelligent civilizations.

The problem with getting any concrete answers, though, is that the vast majority of FRBs are singular in nature, and only emit one unprompted blast. But for some unknown reason, FRB 121102 continues to shoot out radio waves from a galaxy 3 billion light years from Earth.

As part of a program called Breakthrough Listen, which scans the skies for signs of extraterrestrial intelligence, a team of researchers from the SETI Research Center at the University of California, Berkeley, decided to take an in-depth look at FRB 121102. During their five-hour observing session with West Virginia’s Green Bank Telescope, they detected 21 FRBs shooting from the distant galaxy, all occurring within a one-hour time period. The data indicated that the radio waves switched between puzzling periods of extremely activity, to periods of nothing at all.

Knowing that human observations aren’t always perfect, UC Berkeley Ph.D. student Gerry Zhang created a machine learning algorithm to apply to the dataset, hoping to pick up any FRBs that the researchers might have missed. The algorithm revealed 72 additional FRBs emitting from the galaxy — the largest number of FRBs detected in a single observation period.

From the new data, Zhang and his colleagues were able to pinpoint previously unknown details of FRB 121102. They found that the 93 total FRBs didn’t have any specific patterns in their arrival times, and that the radio waves’ bandwidth showed certain patterns of amplifications. What this means for the FRB, exactly, no one really knows. But with additional observations, Zhang and his team hope to further track its arrival times and bandwidth frequencies, ultimately pinpointing the source of the FRBs.

The new findings still leave researchers scratching their heads, but with some time, the artificial intelligence will hopefully detect more characteristics of FRBs, and solve this astronomical mystery once and for all.