After a 4-Billion-Mile Journey, the Rosetta Probe is Less than a Day Away from Historic Rendezvous With a Comet 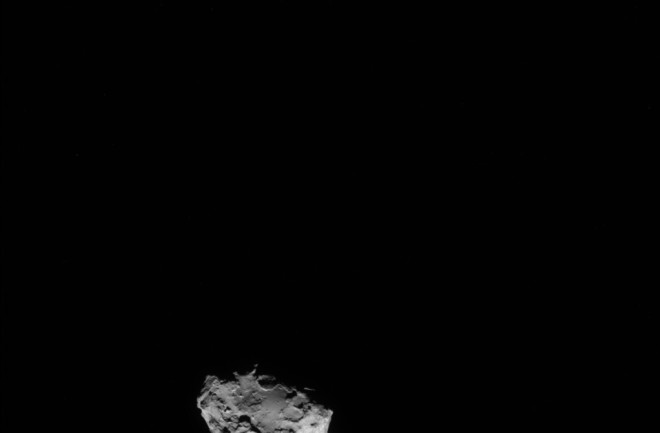 The Rosetta space probe captured this image of comet 67P/Churyumov-Gerasimenko on August 4, 2014 from a distance of about 234 kilometers (145 miles). The spacecraft is less than a day away from its final rendezvous. (Please click the image for a spectacular closeup view of the comet's surface. Source: ESA/Rosetta/NAVCAM) The Rosetta spacecraft is poised to make history. If all continues to go well, it will complete its rendezvous with comet 67P/Churyumov-Gerasimenko at 8 GMT tomorrow, Aug. 6 (4 a.m. Eastern Daylight Time), and settle into orbit. This would be a first: No spacecraft has ever orbited a comet before. Rosetta is now closer to the comet than the International Space Station is to the surface of Earth — and the image above shows that the view is already quite spectacular. The spacecraft's NAVCAM camera acquired the image yesterday.

As the video above shows, after a 10-year journey across billions of miles of space, it has taken a balletic series of maneuvers, choreographed by controllers at the European Space Agency, to bring Rosetta to this point. Now, all that remains is one last thruster burn intended to slow the spacecraft and settle it into orbit around the comet. (For details, check out this post from the official Rosetta mission blog. Also, for an online, interactive, 3-D model of the Rosetta mission, check out my earlier post here.) Why go to all this trouble? Comets formed far from the sun about 4.6 billion years ago, before planets had coalesced. They consist of material that's believed to be relatively pristine. Thus, by studying comet 67P/Churyumov-Gerasimenko, scientists hope to gain valuable insights into the origin and evolution of the solar system, including our own planet. The plan is for Rosetta to examine the comet’s surface from orbit for two months. Then, in early November, Rosetta is scheduled to release a lander named Philae, which is designed to touch down on the comet’s surface to carry out detailed scientific analyses. I'm looking forward to more of Rosetta's images. I'll post them here, so please check back.