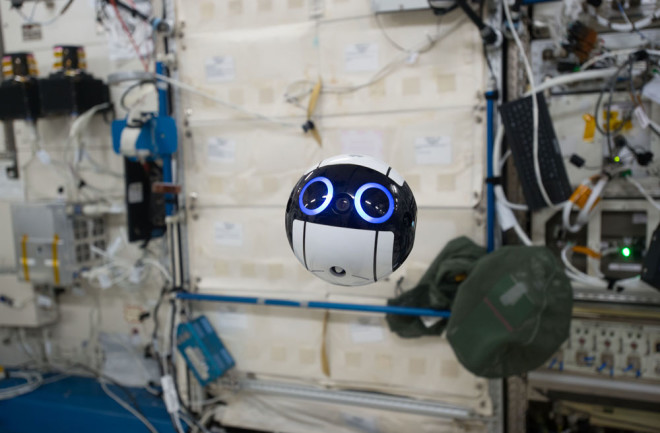 Say hello to JAXA's Int-Ball. (Credit: JAXA) An adorable documentarian has joined the International Space Station crew. The Japanese Aerospace Exploration Agency (JAXA) recently shipped its spherical camera drone to the ISS—thank you, SpaceX—to serve as another set of eyes and ears for ground control. It’s called the JEM Internal Ball Camera, but everyone’s referring to the little feller as “Int-Ball.” Last week, JAXA released the first images of Int-Ball on the job. https://www.youtube.com/watch?v=PntNBeJuRFQ The ISS crew spends a lot of time in front of cameras; in fact, JAXA estimates that photography consumes 10 percent of ISS crew members' working hours. Int-Ball’s mission is to cut photo-taking and filming time down to zero, leaving the crew to focus on other important tasks. To do this, Int-Ball can autonomously float to and fro in zero gravity, and ground-based crew members at the JAXA Tsukuba Space Center can remotely take control of the drone and gather photos and video. Int-Ball is tiny, and it can easily float over an astronaut’s shoulder, granting ground control the same viewpoint. JAXA hopes that Int-Ball’s maneuverability will make ground-to-space collaboration easier. Int-Ball was constructed with JAXA's "all-in-one" miniaturized attitude control sensors and actuators. To get around, internal reaction wheels located on three axes spin at a high rate of speed. Then, magnetic brakes bring the wheel to a halt, generating inertial force. Internal accelerators and gyroscopes control how fast each wheel spins and when the brakes are applied.

(Credit: JAXA) JAXA says the same technology could be used for small satellites, drone flight stabilizers or modular robotic systems. Given Int-Ball's anthropomorphic features, it wouldn’t be surprising if the ISS crew comes up with a more affectionate moniker for the device as it spends more time with the team.