A Virtual Tour of 8 Strange Exoplanets

Astronomers have recently found hundreds of new planets. Here are what some of them might look like. 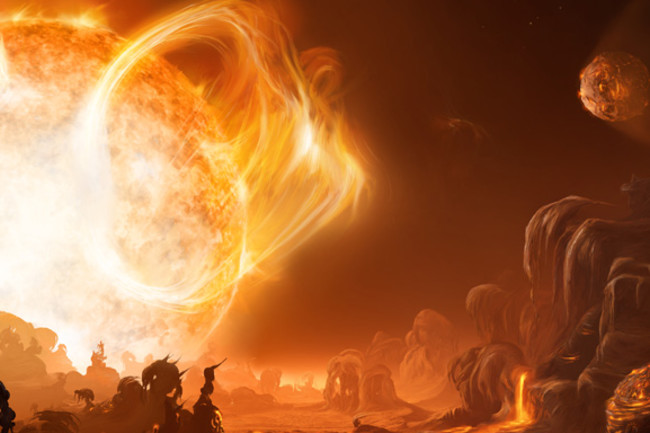 Astronomers have recently found hundreds of new exoplanets, or planets beyond our own solar system. While nobody knows what the view would be like from these planets' surfaces, we can make educated guesses--and illustrations--based on information gleaned by researchers.

Gliese 876D, for instance, has an orbit tighter than Mercury's and a solid mass several times that of Earth, and it may rotate so slowly that sunrise, imagined here, unleashes a fiery hell. The planet's red dwarf star, dominating the horizon, could trigger violent internal tides, leading to monumental volcanic eruptions. A glowing orb of a moon hangs in a blood-red sky, its thin atmosphere shredded by stellar winds. 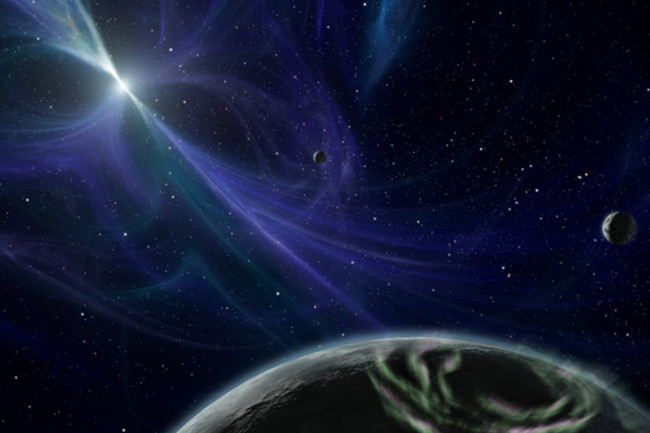 The first exoplanets ever discovered (in 1992) are in some ways the strangest. They orbit a pulsar--a tiny, rapidly rotating neutron star left after a massive star dies and collapses. The planets are only dimly lit by the pulsar's weak glow, but the neutron star's intense radiation might cause vivid auroras, as depicted here. Whether these planets survived the original star's death blast or formed later is unknown. 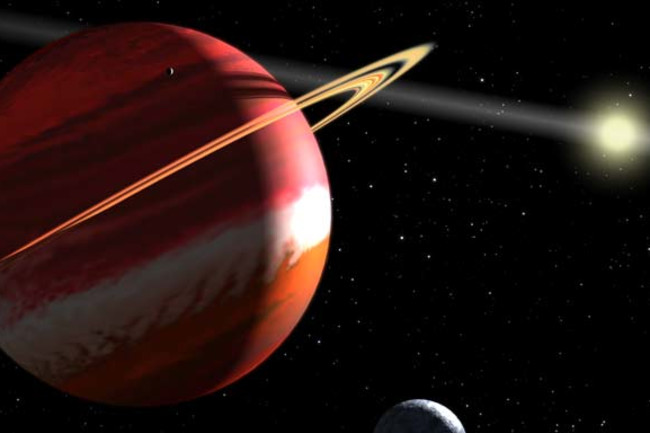 For an alien world, this gas planet seems almost like kin; it's closer than any other known exoplanet. During part of its orbit, it swings roughly as close to its star as Earth is to the sun. But its highly eccentric path also takes it far away from Epsilon Eridani, about as far out as Jupiter. For at least part of its year, this planet would be a forbiddingly frigid place to visit. 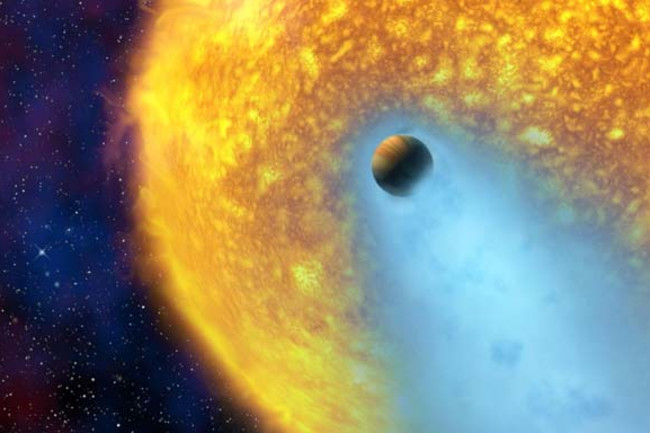 Left: As this "hot Jupiter" cruises close to its sunlike star, its atmosphere slowly boils away. Subject to a surface temperature of about 1,800 degrees Fahrenheit, oxygen and carbon are ripped away from the planet by lighter hydrogen gas and carried in a streaming halo behind it. Observing this "blow-off" effect has led astronomers to propose a whole new category of planets: solid remnant cores of former gas giants. 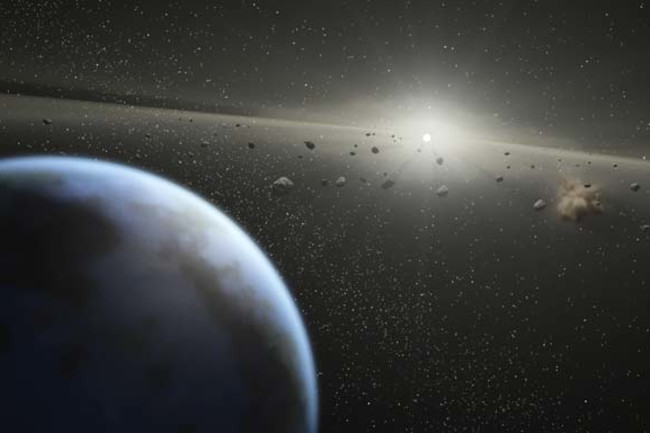 Below: Circling HD 69830 is a mammoth asteroid belt 25 times the size of the one in our solar system. If our asteroid belt were this dense, we would see it at night as a brilliant band across the sky. In 2006 three planets were discovered zipping around this sunlike star, each roughly the mass of Neptune. Frequent collisions between asteroids, such as the one depicted toward the right, send streams of dust into the belt, making it visible to the Spitzer Space Telescope. 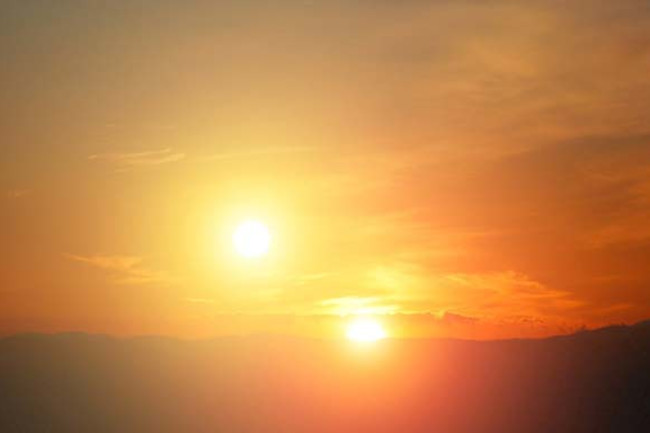 We think one sun is normal because that's all we've got. In reality, solar systems with two stars are two times as common as single-star systems. And data from the Spitzer Space Telescope suggest that planets may in fact be more common in binary-star systems, like the one imagined below. About 60 percent of the binary systems studied have debris disks, suggesting the potential for planets, whereas only 20 percent of single stars have them. Astronomers have even found tentative evidence of a planet in a triple star system, HD 188753. 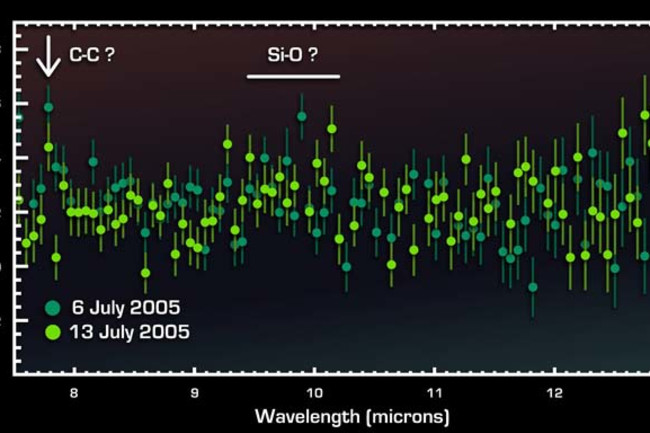 This spectrum describes the hot, Jupiter-like gas giant depicted on slide 4. Using the Spitzer Space Telescope, astronomers compared infrared light from planet and star combined (dark green) with data taken while the planet was in eclipse behind its star (lighter green). They expected to see signs of water but found silicates, suggesting that HD 209458b might be blanketed in dust clouds. Oxygen and carbon have since been detected in this world's atmosphere--a first. 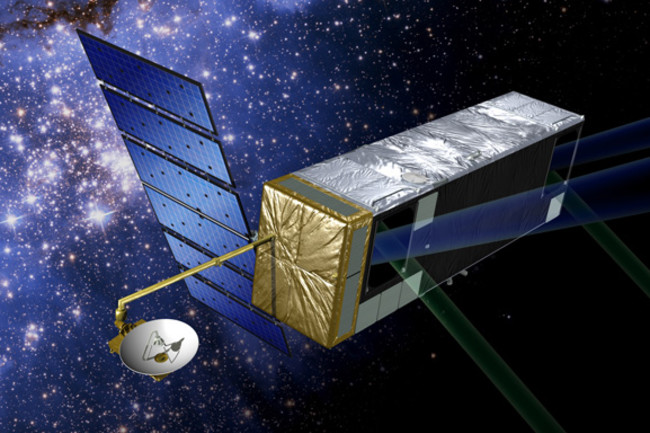 Astronomers have found a bumper crop of exoplanets in the past decade, but current techniques aren't good at detecting the smaller ones that might resemble Earth. As part of its PlanetQuest project, NASA hopes to launch a spacecraft, depicted above, that would use the newer method of optical interferometry to find these smaller, fainter worlds.

Scientists Chronicle the Shifting Colors of a Comet's 'Seasons'

The SciencesDC-X: The NASA Rocket That Inspired SpaceX and Blue Origin