A radio telescope planned for the farside of the moon could plug a 500-million-year hole in cosmic history. 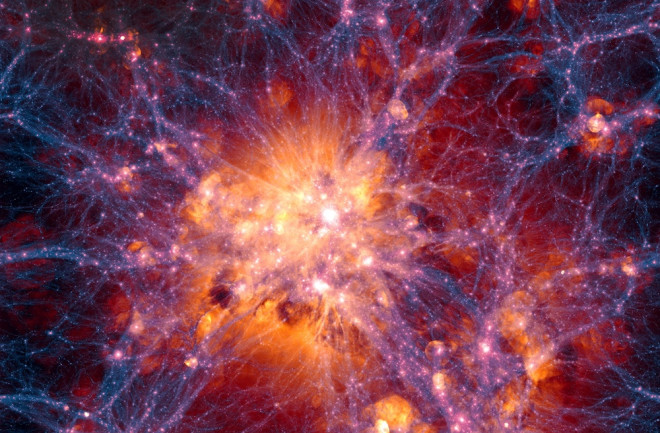 A massive galaxy cluster is intertwined with threads of dark matter (blue) and gas (orange). The formation of large-scale structures seen today are thought to have originated during the universe’s mysterious “dark ages.” (Credit: Illustris Collaboration)

This article appeared in the June 2021 issue of Discover magazine as "In Search of the Dark Ages." Subscribe for more stories like these.

Some 13.8 billion years ago, our universe burst into being. In a fraction of a second, it ballooned from subatomic to the size of a grapefruit. And as the cosmos grew and grew, it also cooled, until the building blocks of matter — subatomic particles called quarks and gluons — could form. Eventually, this quark soup aggregated into atoms. Atoms merged into larger molecules. Gas filled the universe. Yet the cosmos would sit like this — dark — for hundreds of millions of years before light shone from the first stars and galaxies.

We understand parts of what happened in the early universe. But a huge blank still haunts astronomers. They call it the “dark ages” because, with no starlight to study, they’re left guessing where all the familiar stuff came from. How did we go from a gas-filled universe to the one we now see in the night sky?

“The early universe had no galaxies, just hot stuff. As things cooled off, something had to happen before the galaxies formed,” says Nobel Prize-winning astrophysicist John Mather of NASA’s Goddard Space Flight Center. “Honestly, we’ve got lots of stories and lots of predictions, but no measurements.”

Unravelling this mystery is “one of the great objectives of modern-day astronomy,” he adds.

To solve it, scientists and engineers have identified an unlikely location for their work, one that could help shape the next generation of astronomical research: the farside of the moon.

Before the first stars, the universe didn’t emit visible light, but the primordial matter that pervaded the universe likely did emit radio signals. Astronomers have never seen these wavelengths because they’re so stretched out that they can’t be detected over the radio chatter bouncing around Earth. The farside of the moon is the one place in the inner solar system where radio astronomers can find some peace and quiet. Its surface always faces away from Earth, so if astronomers could build a radio telescope there, they’d have a natural noise barrier.

Telescopes on the Moon

In 1986, nearly 100 of the world’s leading astronomers gathered at a hotel in Houston to present dozens of bold ideas for building telescopes on our natural satellite. Even before the Apollo program, scientists had argued that lunar telescopes were one of the best scientific justifications for going to the moon. That push helped land a small telescope on Apollo 16. And by the mid-1980s, the idea finally seemed ripe. NASA’s space shuttle program was thriving and plans for a space station were taking shape. A return to the moon seemed not far off.

Then, less than three weeks after the Houston meeting, Space Shuttle Challenger crashed. America’s revived moon program would crash in the years ahead too.

Still, not everyone gave up the idea. Ever since that meeting 35 years ago, Jack O. Burns has been the lead evangelist for building telescopes on the moon. He’s pushed for lunar telescopes through three separate return-to-the-moon initiatives.

“My job since the 1980s has been leading the charge on what science we could do in terms of astronomy once we get to the moon,” says Burns, who directs the NASA-funded Network for Exploration and Space Science. For the first time, Burns thinks this crazy idea might actually become a reality. After Donald Trump was elected president in 2016, Burns served as the only scientist on the new administration’s NASA transition team. The ideas that the team came up with later became the Artemis program, which aims to land lunar astronauts by 2024.

Burns also presented his ideas for using lunar telescopes to unravel the cosmic dark ages. He sees this as the “killer app” — the scientific case that finally makes lunar telescopes indispensable. Over dinner, he sold then-NASA Administrator Jim Bridenstine on the idea, too.

Burns has now completed a NASA-funded engineering study on a project he calls FARSIDE, or Farside Array for Radio Science Investigations of the Dark ages and Exoplanets. The entire radio telescope would pack into a robotic lunar lander that would touch down on the farside of the moon. Then, four small rovers would slowly uncoil nearly 30 miles of wire and 128 antennas into a spiral pattern covering some 6 miles.

In the past, astronomers’ moon telescope proposals relied on lunar colonies and multibillion space programs. “The only way we could conceive of putting scientific instruments on the moon was with astronauts,” Burns says. But thanks to modern robotics and the emergence of private spaceflight companies, FARSIDE’s price tag is less than the cost of a Mars rover.

For more than a year, the FARSIDE team has been working with Jeff Bezos’ space company, Blue Origin. While Elon Musk dreams of Mars, Bezos’ ultimate goal is to have humans working and living on the moon — including doing science. To serve that goal, he’s pumped billions of dollars into reusable rockets and a cargo lander called Blue Moon that can carry several metric tons of weight to the lunar surface. With this spacecraft, Blue Origin aims to open the door to lunar colonies. For NASA, it’s also a way to get American astronauts back on the moon. But that kind of cargo capacity is more than enough to deploy a telescope, plus the rovers to build it, in a single trip.

Burns isn’t the only one pursuing it. The science potential of the lunar farside has attracted interest from other researchers — and other countries.

Astronomers have never observed in this part of the radio spectrum before, and researchers are eager to be the first to see what’s hiding there. It could offer a new test for standard cosmology. And the measurements are so sensitive, they potentially could even detect electromagnetic fields around exoplanets, helping identify habitable planets.

“You’ve got this radio-quiet environment on the other side of the moon that enables very sensitive measurements that you just can’t get any other way,” says Steve Squyres, Blue Origin’s chief scientist. “That environment is very, very conducive to doing breakthrough science.”

Even NASA recently funded another lunar telescope study. The proposal suggests using small robots to climb cliffs and suspend a radio observatory inside of a farside lunar crater.

China is chasing similar goals. The country has already deployed a small telescope on the lunar farside with its Chang’e 4 lander. Now, it’s moving forward with plans for missions surprisingly similar to the ones Burns has been pushing for decades.

In the meantime, Burns received NASA funding to complete a concept study and develop instruments for a project called the Dark Ages Polarimetry Pathfinder, or DAPPER. This small satellite will be deployed from a spacecraft “bus,” which the agency plans to launch as soon as 2022. And instead of sitting on the moon’s surface, it will make initial observations of the dark ages and cosmic dawn during the brief part of its orbit where it’s behind the moon.

But with NASA and private companies racing to put boots on the moon as quickly as possible, astronomers have grown nervous that the radio noise pollution problems will follow them off Earth.

“There’s an imperative to do it soon,” Squyres says. “While the radio environment on the farside of the moon is quiet now, it’s not likely to stay that way.”

If scientists can start building research stations on the lunar farside, they may be able to create a long-standing precedent that this region is protected from development, like Antarctica. But wait too long, and they’ll miss the window.

“We’re ready to go now,” Burns says. “There’s no question we can do this. And someone will do it, whether it’s NASA or the Chinese or Jeff Bezos. I’m convinced it will be done.”

Eric Betz is a science and tech writer for Discover, Astronomy and others