NASA's Swift observatory is designed to detect high-energy radiation coming from the most powerful explosions in the Universe: gamma-ray bursts. But it's also equipped with a more normal telescope, one that has a 30 centimeter mirror -- that's smaller than the one I have in my garage! But, this telescope is in space, so the atmosphere doesn't blur out the images. More importantly, the air above our heads absorbs ultraviolet light, preventing ground-based telescopes from even seeing any UV light. So Swift's UVOT (Ultraviolet/Optical Telescope) may not be big, but it can easily see UV coming from astronomical objects. And it has a wide field of view, allowing it to get fantastic images of bigger things... like galaxies. 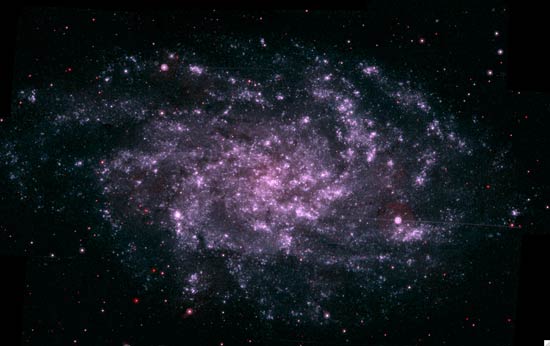 That's M33 (click to embiggen), a very nearby galaxy; it's part of our neighborhood of galaxies called the Local Group. It's a hair under 3 million light years away, and it's smaller than the Milky Way, about half our size and a tenth our mass. It's actually visible with binoculars as a fuzzy patch not too far from its big brother, the Andromeda galaxy. The funny thing is, we know that UV light is predominantly given off by star-forming regions in galaxies; gas clouds where stars are actively being born. The amount of UV from M33 indicates that it is ablaze with stars, cranking them out at a rate far higher than the Milky Way. So even though it's a bit on the smallish side, it's certainly pulling its weight when it comes to making stars. This image is pretty cool. It's a mosaic of 39 individual images totaling 11 hours of exposure time, using three different UV filters, and it's the most detailed UV image of an entire galaxy ever taken. Not bad for a telescope built to do an entirely different kind of science! I worked on the education and public outreach for Swift for several years, and I remember first reading about the UVOT and thinking, wow that's a pretty small telescope. I wonder what it will be able to do? Then after a moment or two of some mental math I began to realize that this was in fact a fairly powerful telescope; it's no Hubble, but it can do some terrific science. And it can also make some very pretty pictures.