A Supernova Secret May Be Hidden Inside Meteorites 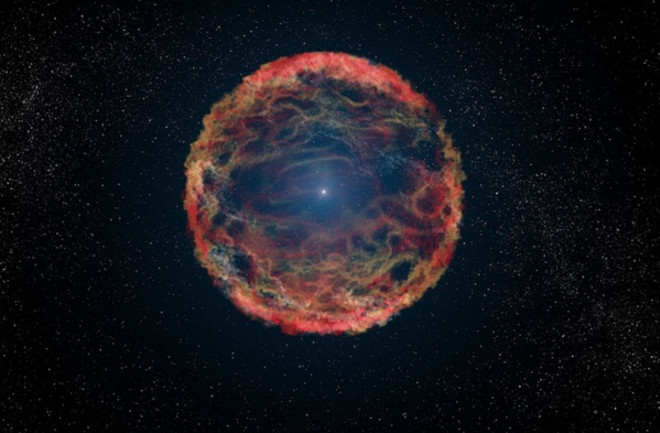 An expanding shell of dust and gas is blown outward, away from a star’s dense, white-dwarf core in this artist's illustration. (Credit: NASA/ESA/STSCI/G. Bacon) Let us sympathize, for a moment, with neutrino researchers. These tireless folks devote their energies toward understanding subatomic particles that, it would appear, want nothing to do with them. Neutrinos, born from supernovas and other cosmic events, flit through the universe unaffected by almost all of it, harmlessly passing through any matter in its way; about 100 billion originating in the sun pass through your body every second, night and day. It’s extremely tough to find an individual neutrino, but given a big enough area, you’re bound to catch some eventually. But what if there was another way — some method of indirectly spotting the work of neutrinos in more common materials? Research appearing today in Physical Review Letterssuggests that might just be the case, with meteorites playing the unexpected role of common material. The paper could improve our understanding of neutrinos, and tell us more about supernovas, the universe’s biggest explosions, in the process.

To understand, we first need to know a few things about neutrinos. The elusive things, often dubbed ghost particles, come in six varieties: three flavors (electron, muon and tau), and an additional anti-neutrino for each flavor. (Or, maybe, anti-neutrinos are the same as regular neutrinos, it’s not really clear.) But interested researchers put up with this neutrino nuttiness because they have interesting things to say about the processes that produce them. Among these processes are supernovas, stellar explosions. Despite tremendous advances in recent decades, astronomers still have many questions about exactly how these cosmic fireworks go off. But by studying how neutrinos interact with the outer layers of the star as it’s going supernova, astronomers are starting to close in on the answer — figure out the balance of neutrinos spewing through the debris, and you can figure out what caused them all in the first place, right in the heart of the dying star. The only problem is, so far, they have an incomplete picture. Astronomers have found telltale markers for only five of the six types of neutrinos, in the form of specific versions of elements (known as isotopes) produced by matter's interaction with individual neutrinos. The odd one out is the electron anti-neutrino.

That’s where today’s finding comes in. The international team of authors suggests that an isotope of technetium with 98 neutrons and protons (^98Tc) might be this missing piece of the neutrino puzzle. It looks like electron anti-neutrino interactions can produce 20 percent of a supernova’s output of ^98Tc — but, because it’s an unstable isotope, the stuff doesn’t last long enough for researchers to study it directly. Luckily, that technetium decays into a type of ruthenium, which is stable. Should a stellar explosion have blasted some into the collection of gas and dust that went on to form our solar system, the ruthenium would still be there today within its undisturbed corners. And there’s actually a common way for scientists to get their hands on pristine bits of the early solar system to find out: meteorites, or bits of space rocks that have fallen to the ground after streaking through the air.

So, to recap: Researchers can study meteorites to look for a type of ruthenium, which indicates roughly how much of it there was in the initial proto-solar system, which in turn indicates how much ^98Tc was around in the first place to produce that ruthenium, which in turn suggests how neutrinos interacted with matter around an exploding star. Whew. The estimated amounts of ruthenium, based on computer models, is too low to be detected with current instruments, but it’s juuuust barely too low. So with any luck, researchers should soon be embarking on that long journey from meteorites to supernovas. If they do, it’ll be good news for those beleaguered neutrino researchers, since they’ll have more complete data about how all the varieties of neutrino behave. But it’ll also help out supernova researchers hoping to fill in the missing pieces about what sets their stars off. And as a kind of cosmic bonus, the paper also opens up an avenue for researchers to find out how much time has passed between the most recent supernova and the solar system's formation. Whew indeed.