A Song for Europa 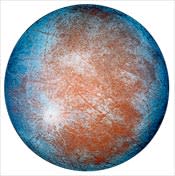 Astronomers are itching to know if Jupiter's moon Europa has a huge, potentially habitable ocean hiding beneath its icy crust. There are intriguing signs: giant fractures resembling arctic ice floes on Earth, and magnetic readings from the Galileo spacecraft hinting at the sloshing of a briny sea. "But that doesn't prove that it is an ocean, and it doesn't show how thick or how deep it is," says Nicholas Makris, an ocean engineer at the Massachusetts Institute of Technology. To find out for sure, he argues, we need to go back and give Europa a careful listen.

Makris proposes sending a network of soda-can-sized microphones, planted a few feet into the Europan ice and beaming out low-frequency sound waves, to reveal what lies beneath. Scientists could use the rumbly sounds to map the alleged ocean the same way seismologists use earthquake waves to probe Earth's interior. "You'd send out a pulse and wait for it to hit bottom or a different layer, and come back," Makris says. He predicts such a sound system will be included in a Europa lander in about 20 years.