A solar eclipse... FROM MARS!

OK, this is simply too cool. The Mars Curiosity rover has already returned thousands of images taken of the Red Planet's landscape. But on September 13, 2012, it was commanded not to look around, but to look up, at the Sun. Why? Because Mars's tiny moon Phobos passed directly in front of the Sun, partially eclipsing it! 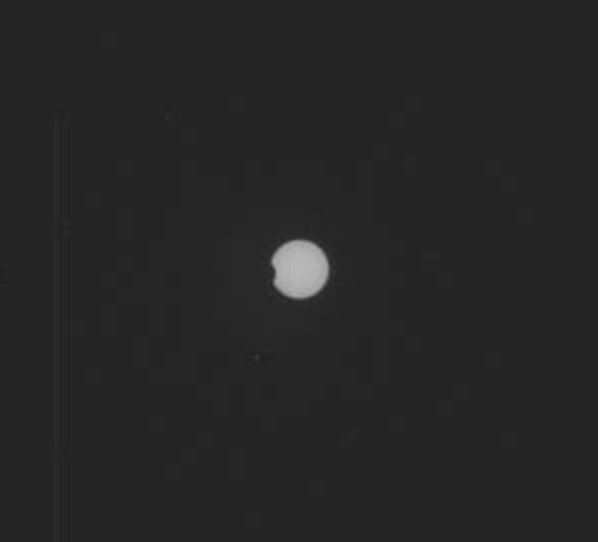 Sweeeeet. I blew the original image up by a factor of two for clarity. Technically, this is called a transit - when a much smaller body passes in front of a larger one. Usually, there's some science that can come from this; the timing of the transit gives a better orbit for the moon (since the rover's location on the surface is precisely known), and so on. In this case, though, we study Phobos with other orbiting spacecraft, so I'd think its orbit and position are extremely well determined. It may very well be that this shot was taken just because it's cool. I actually kinda hope so. It's not the first time a Phobos transit has been seen; in fact it's been done several times. Here's a video of one seen by the rover Opportunity in November 2010:

. I'll note that as of right now, the image above is the only one I've seen listed on the Curiosity raw images page

(at decent resolution, that is; there are lots of tiny thumbnails, and bigger, cleaner versions should show up soon). The image was taken by the MASTCAM, which has a filter on it so it can observe the Sun. It does that for various reasons, including being able to observe how much the Martian atmosphere is absorbing sunlight. Phobos orbits Mars pretty close in, just about 6000 km (3600 miles) above the surface of Mars - compare that to the 400,000 km distance from the Earth to the Moon! Phobos is so close that it transits the Sun pretty much every day for some location on Mars, making this something of a less-than-rare event. It'll only be a year before it happens again at Curiosity's location. Still. It's an eclipse, seen from Mars, taken by a nuclear powered one-ton mobile chem lab that we put there. I think that qualifies as pretty damn cool.