Located just 4.2 light-years away, the star Proxima Centauri now has both an Earth-like world in its habitable zone and a more distant super-Earth. 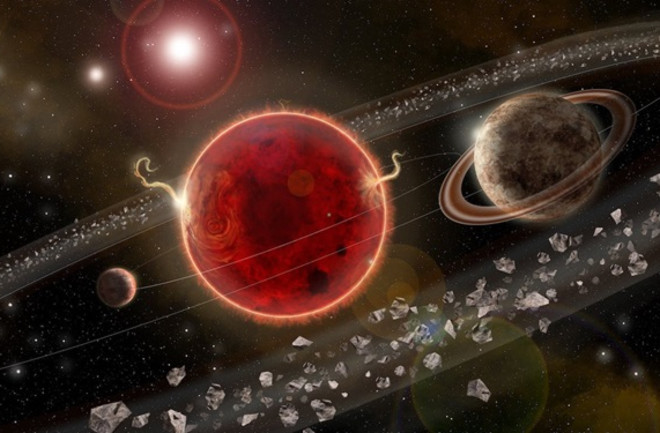 This artist’s concept shows the Proxima Centauri system, including the roughly Earth-sized planet Proxima b (left) and the super-Earth planet Proxima c (right). According to new research, Proxima c has a minimum mass of about 6 Earth masses, and it orbits its red dwarf host star once every 5.2 years. (Credit: Lorenzo Santinelli)

Our nearest celestial neighbor, the star Proxima Centauri, likely has a second planet.

The planet, dubbed Proxima c, is at least about 6 times the mass of Earth and orbits its tiny red dwarf host once every 5.2 years. If confirmed, the newly discovered super-Earth would be the second terrestrial world found in the Proxima Centauri system, which is located just 4.2 light-years from Earth.

According to the researchers, the discovery of Proxima c could provide insights into how low-mass planets around low-mass stars form, especially when the planets begin their lives well beyond a star’s “snow line,” where water turns to solid ice.

You Got a Friend in Proxima b

The star Proxima Centauri has long captivated the astronomical community. This is largely due to the fact that the red dwarf is the nearest star to the Sun, meaning that future interstellar missions like Breakthrough Starshot will likely start by venturing to the Proxima Centauri system first.

Furthermore, in August 2016, an article published in Nature announced the discovery of a terrestrial planet orbiting in the middle of Proxima Centauri’s habitable zone. The Earth-sized world, dubbed Proxima b, raised hopes that a potentially life-friendly planet could be hiding right next door (cosmically speaking, of course).

Finding a second planet around Proxima Centauri not only increases the appeal of exploring the system more closely, it also raises some important questions about a feature of planetary systems called the snow line.

The snow line refers to the minimum distance from a star at which molecules (such as water, methane, or carbon dioxide) "freeze out" and become solids. According to most planet formation models, it’s easier to create a super-Earth planet when it forms near the snow line, as icy grains tend to glom together more easily and quickly.

As the authors of the new study write in their paper: “The formation of a super-Earth well beyond the snow line challenges formation models according to which the snow line is a sweet spot for the accretion of super-Earth, due to the accumulation of icy solids at that location, or it suggests that the protoplanetary disk was much warmer than usually thought.”

However, before the researchers can draw any sweeping conclusions about how Proxima c formed, they say they need additional evidence to completely confirm its existence.

The new research was published January 15 in Science Advances.