A Radioactive Metal May Be Vital For Building Water Worlds 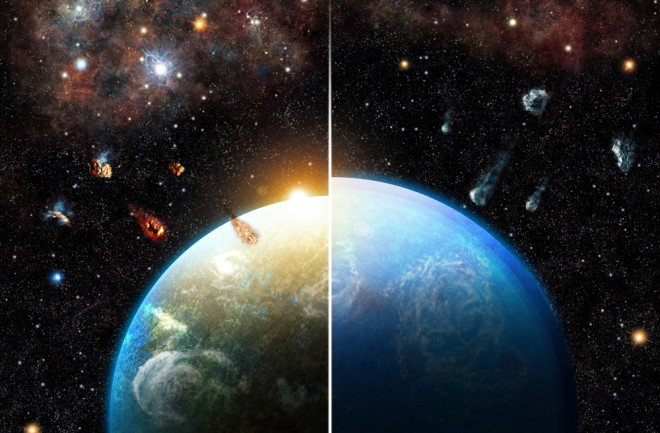 Planets that form in regions with high levels of aluminum may be left with dry materials leading to Earth-like planets, while those in aluminum-light environments may stay wet and form ocean worlds. (Credit: Roger Thibaut) While we tend to think that Earth’s oceans make it a watery planet, it’s actually only a tiny fraction of a percent of water by mass. Looking out into the universe, it’s clear water is more common than our own planet implies. Some exoplanets can have half their mass as water. So, what causes some planetary systems to stay wet, while others dry out? The answer might be aluminum. Tim Lichtenberg is the lead author of a new study published Feb. 11, in Nature Astronomy. He says that large amounts of Al-26, a radioactive form of aluminum, can heat up and dry out the large boulders, some 5 to 50 miles across (called planetesimals), that collide to form planets. As a result, the amount of aluminum a young system has could be a predictor of what types of planets will evolve there.

All stars tend to heat and dry out material – from pebbles to planetesimal – that orbits closer than what’s called the snow line. Beyond the snow line, ice sticks around and gets incorporated into planets, which can then keep that ice and eventually turn it into water, even if they later migrate closer to the sun. For instance, our own Earth keeps water trapped under its atmosphere, while Mars, farther out, lost its water. Both are now inside the snow line, but probably formed farther out. Aluminum heating only matters to planetesimals of a certain size. Small pebbles don’t have enough Al-26 to cause any heating. Full-size planets may be able to hang onto their water through other methods – like having an atmosphere. But aluminum heating would affect all planetesimals in the unlucky size range, no matter how close or far they are from their sun.

A good example of this effect in action might be the TRAPPIST-1 exoplanet system. TRAPPIST-1 has seven rocky planets circling a dim red dwarf star. Three are in the habitable zone, and all are thought to be temperate enough to host water. Researchers still don’t know all the details of the system, and Lichtenberg cautions that uncertainties are still high for many of the TRAPPIST-1 planets. But it seems that only about one percent of their mass is made of water, which is surprising to most planetary scientists. Red dwarfs are cool stars compared to the sun, meaning their snow line should be quite close, allowing lots of icy material for planets to sop up as water. So if this water is missing, it’s worth asking why. TRAPPIST-1 is strange in another way. In any system, planets circling farther from the star, traveling larger orbits, should have more chances to pick up icy material – they literally travel a bigger circuit through space. But that’s not what observers see in the TRAPPIST-1 system. Lichtenberg says, “This speaks to a system-wide mechanism, which is exactly what our Al-26 method is.” Lichtenberg points out there’s no proof that aluminum heating caused our solar system or TRAPPIST-1’s relative dryness. “This is not the only method,” he says, that can dry out systems. “But it is a powerful one.”