A Quasar-Powered Storm Pours From the Teacup Galaxy 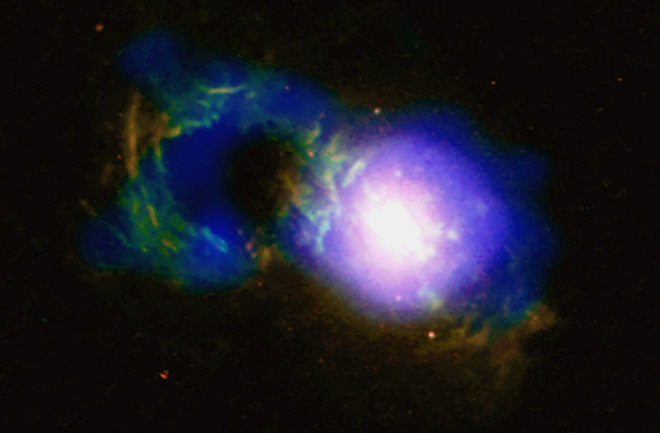 This composite image shows J1430+1339, known as the Teacup galaxy. Optical light (red and green) was taken by NASA's Hubble Space Telescope and X-ray data (blue) was collected by NASA's Chandra X-ray Observatory. (Credit: X-ray: NASA/CXC/Univ. of Cambridge/G. Lansbury et al; Optical: NASA/STScI/W. Keel et al.) Your nighttime cup of chamomile might help you go to sleep, but this turbulent teacup is far from soothing. Sitting inside a galaxy known as the “Teacup,” nicknamed after its distinct silhouette, lies a storm that’s causing quite the stir. Powered by a supermassive black hole, astronomers thought the commotion inside this distant galaxy was rapidly dying down, but recent data published in the Astrophysical Journal says otherwise. The uproar is happening within the bright mass at the center of the Teacup, which is roughly 1.1 billion light years from Earth. The composite image above, displaying both optical (red and green) and X-ray (blue) light, shows a supermassive black hole outshining the rest of its host galaxy. While the black hole itself can’t be seen, it's surrounded by incredibly strong gravitational and magnetic fields. These allow the powerful black hole to suck up surrounding stars, planets, dust and gas. Ripping all of this material to shreds produces extreme amounts of radiation — more than all of the stars in the galaxy. Known as quasars, these blazing regions are thought to be the brightest objects in the universe. Aside from its intense glow, astronomers believe that the Teacup’s signature handle was actually created by the quasar. The staggering amount of radiation that surrounds the black hole can cause high-speed galactic winds, known as jets, to shoot out from either side of the quasar. These powerful jets likely blew a ring of galactic material into space and created the empty “bubble” that sits inside of the handle. Grasping the Handle In a previous study, conducted after the Teacup was discovered in 2007, researchers used optical telescopes to observe its features. They found that its handle was made up of ionized atoms, meaning that high amounts of radiation had, at some point, passed through and stripped them of their electrons. But comparing the amount of radiation needed to ionize the atoms to the amount gusting from the quasar showed that there wasn’t nearly enough. This implied that the quasar’s wind, once housing enough radiation to ionize atoms, had slowed down drastically. Their stats suggested that the quasar’s radiation production had fallen by a factor of at least 50, and possibly up to 600, in the last 100,000 years. This steep decline painted a dark picture for the ever-weakening quasar. But new data from NASA’s Chandra X-ray Observatory and ESA's XMM-Newton mission are breathing light into the quasar’s future. Together, their X-ray observations show that the Teacup is highly obscured by gas, which hindered the optical telescope’s ability to detect all the radiation emitting from the quasar. The new study picked up much more radiation, and suggests that it's only decreased by a factor of 25, maximum, over the last 100,000 years. The discovery not only pours new life into the Teacup’s quasar, but shows how astronomers can use unique galactic features, like the Teacup’s handle, to learn about the mysterious black holes that lie within them.