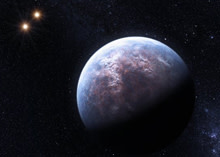 Planets, planets, everywhere! Astronomers have announced the discovery of 32 new planets orbiting distant stars, bringing the list of known exoplanets up to more than 400. The batch of freshly discovered worlds include four that are only five or six times the mass of Earth, an encouraging sign in the quest for a truly Earth-like world that could support life. Researcher Stephane Udry says the

The discovery was made with the HARPS telescope at the European Southern Observatory's facility in Chile. HARPS uses the so-called wobble method to detect planets, in which researchers look for the slight quiver in a star's regular movements that indicates the gravitational tug of an orbiting planet. Planets were found around a surprising variety of star types.

Gas giant planets were found orbiting "metal-poor" stars -- those lacking in elements other than hydrogen and helium -- which until now had been considered unlikely places for planets to form [Washington Post].

Researchers also located four exoplanets around relatively cool, small stars known as M-class red dwarfs, and will continue to examine such stars for signs of Earth-like planets. The team expects to keep spotting planets by the dozen, says Udry: