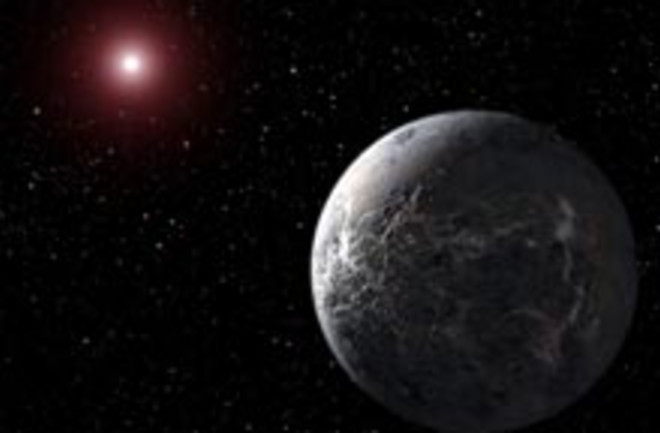 While astronomers have found more than 300 planets beyond our solar system in the last 15 years, none of those "exoplanets" has been a likely candidate for extraterrestrial life. The exoplanets discovered thus far are all either too close to the hot sun or too far away and therefore too frigid to host life as we know it. But Alan Boss says it's just a matter of time before we find Earth-like planets in the "Goldilocks zone": he calculates that 100 billion of them may exist within our own Milky Way galaxy. And NASA's Kepler satellite, which is expected to launch on March 5, may be the key to finding them, he says. Boss, an astrophysicist and author of the new book "The Crowded Universe: The Search for Living Planets," says that

if any of the billions of Earth-like worlds he believes exist in the Milky Way have liquid water, they are likely to be home to some type of life. "Now that's not saying that they're all going to be crawling with intelligent human beings or even dinosaurs," he said. "But I would suspect that the great majority of them at least will have some sort of primitive life, like bacteria or some of the multicellular creatures that populated our Earth for the first 3 billion years of its existence" [CNN].

Europe's CoRoT satellite has already discovered several fascinating exoplanets, including a rocky world that's about twice the size of Earth but devilishly hot due to its tight orbit around its sun. Both CoRoT and the soon to be launched Kepler use the transit method to detect new planets, in which the subtle dimming of a star's light reveals a planet passing in front of it.

The Kepler telescope will gaze continuously at 100,000 stars in two constellations known as Cygnus and Lyra for more than three years. "Within three to four years from now, these telescopes will tell us just how frequently Earths occur. It's an exciting time to be alive," Boss said [The Guardian].

However, CoRoT and Kepler are unlikely to detect any signatures of actual life on exoplanets; that daunting challenge will be taken up by the next generation of space telescopes, Boss says. Kepler's sensitive telescope is expected to pick out rocky planets that are not only roughly the same size as Earth, but also orbit their star at a roughly equivalent distance. But that won't happen right away, Boss explains.

It takes at least three orbits for astronomers to confirm that the dimming of the star is really caused by a planet rather than, say, the brightness cycles of a variable star or a binary-star system. If the planet is extremely close to its star ... that won't take long. For example, the hot super-Earth identified by Corot completes an orbit in just 20 hours. Farther-out planets will require more time to orbit, and therefore more time to detect. "The earth, by definition, will take at least three years to get," Boss said. "Roughly four years from now, we will be beginning to make our claims for Earthlike planets around solar-type stars" [MSNBC].

Related Content: 80beats: Small, Rocky Exoplanet Is the Most Earth-Like World Ever Seen 80beats: First Ever Weather Report From an Exoplanet: Highs of 2240 Degrees 80beats: Dust Around Dead Stars Suggest Rocky Planets May Be Commonplace 80beats: Hubble Reports First Ever Signs of Carbon Dioxide on an Exoplanet DISCOVER: How Long Until We Find a Second Earth?Image: NASA