Astronomers say this new way to find black holes could expand the small number discovered so far in our Milky Way galaxy. 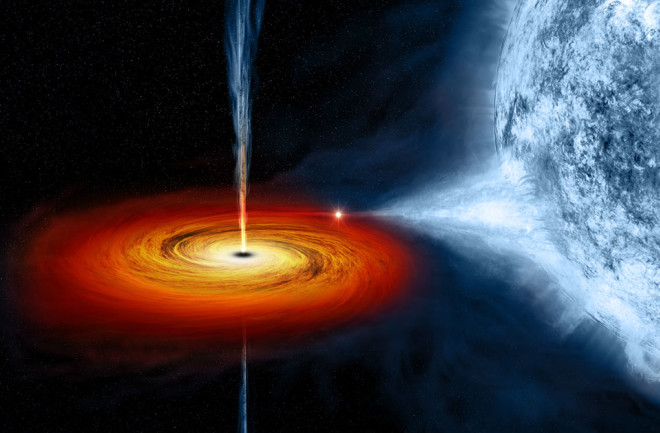 Editor's Note: Since this research was initially published, several studies have contested one of its main results (link 1, link 2, link 3). Outside researchers believe the object discovered is likely a black hole much less than 70 solar masses.

When many large stars die, they turn into black holes. And yet, despite the billions of stars in our Milky Way, astronomers have only discovered a handful of black holes within the galaxy. That's because, at the moment, their methods can only pick out black holes in certain situations.

The few nearby black holes discovered so far have been found because they're locked in a close orbit with a star. And astronomers find them by looking for X-ray radiation given off as the black hole pulls material from this companion sun.

Now, a group of Chinese astronomers think they’ve found a star-and-black-hole pair another way. Their method could help astronomers find many more black holes, especially ones in much wider orbits than the X-ray method can find.

And that's not the only surprise with the find. The new black hole they’ve found is more massive than they think it should be from the collapse of a single star in this system. And so astronomers aren’t sure how this odd black hole came to be in the first place.

The team describes their findings in a paper published Wednesday in Nature.

The Large Aperture Multi-Object Spectroscopic Telescope (LAMOST) in China has been scanning the skies since 2016 watching for stars in binary systems. Along the way, astronomers used it discovered a relatively bright star, some eight times the sun’s mass, that orbits a seemingly invisible star once every 79 days.

From this star’s motions, they concluded that its companion must be a black hole. They also spotted light coming from a disk of material surrounding the black hole, which helped them narrow down how big it is.

To their surprise, they found that the black hole would need to be about 70 times the sun’s mass. According to astronomers’ current understanding of how stars evolve over time, a black hole of this size shouldn’t form from a single star of the kind they suspect it started out as.

The researchers have a couple speculative explanations for how this system came to be. One possibility is that this was actually a triple star system, with two close stars that together formed one massive black hole and one farther star that still remains today. Another possibility is that the 70 solar masses of black hole in the system is actually two smaller black holes that orbit tightly together while the observed star circles them in its wider, 79-day orbit.

Both of these scenarios are speculative, said Jifeng Liu, an astronomer at the Chinese Academy of Sciences and one of the authors of the paper. The team is currently working on further studies to test the double black hole idea.

They're still not sure how this weird system formed. But Liu said he is excited that they can now find black holes through this method of watching stars’ motions, instead of relying on X-ray radiation that's only emitted for a small number of star-and-black-hole pairs.

The new method should help provide a less biased view of black holes in the Milky Way.