Preserved specimens are a veritable treasure trove of information, and a new approach allows scientists to access DNA. 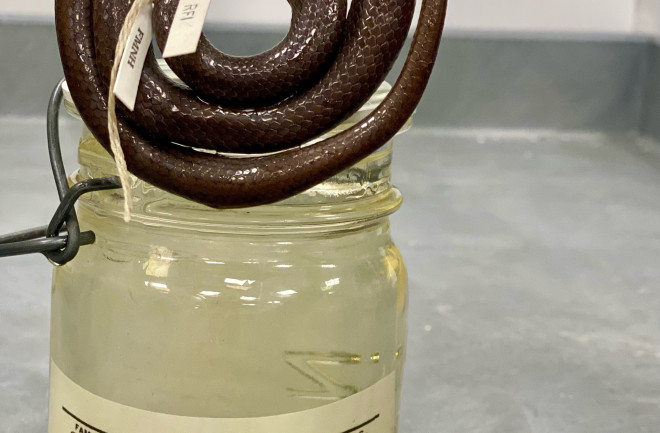 In museum archives across the world, billions of biological specimens, including fish, frogs, salamanders and snakes float in bottles of fluid for scientific study. From decades and centuries ago, these specimens have played an important part in the identification and description of species.

Now, according to an article in Frontiers in Ecology and Evolution, new approaches allow scientists to reliably retrieve DNA from their tissue, making these specimens all the more informational. These approaches, the study authors say, support scientists in revealing relationships among species and have already helped classify a previously confounding species of snake.

The Pickle of Pickling

Scientists have saved specimens in fluids, submerging them and storing them, since the 17th century. The traditional process involves formalin, an aqueous solution of formaldehyde, and alcohol, and it preserves animal tissues in almost perfect condition. The only issue is that these chemicals tend to damage and destroy the tissue’s DNA, posing a problem among modern scientists who want to study specimens’ genetic makeup.

“These older museum specimens are sometimes the only available examples of a species, but they weren’t preserved with DNA in mind,” says senior study author Sara Ruane, assistant curator of herpetology at the Chicago Field Museum, in a press release. “This paper is about how we can squeeze every bit of information possible out of them.”

Scientists can extract DNA from fresh tissues using digestive enzymes and temperature treatments, which deteriorate the tissue without deteriorating the DNA. To separate the DNA from samples of preserved tissue, the team added additional enzymes and increased the temperatures. Though these methods were successful in several previous studies, the team realized that they weren't always reliable. Their genetic analyses could still contain serious gaps.

That’s because the formalin and alcohol, involved in the preservation process, tend to break the DNA into tiny, difficult-to-study shards. To overcome this, the team used special visualization software. They then pieced together the tiny fragments from one specimen and fuller fragments from other specimens to assemble a complete genetic analysis.

The study shows that these specimens contain a wealth of information, waiting to be tapped. “I wanted to show scientists that you can still do work with these specimens, it just requires a bit of finagling,” says primary study author Justin Bernstein, a researcher at Rutgers University-Newark, in a press release.

The study authors state that this sort of finagling has already issued new insights into the homalopsids, a grouping of 56 separate snake species known for slinking their way through the aquatic areas of South and Southeast Asia and the Indo-Australian Archipelago.

“We use DNA to study their evolutionary history, to try to describe new species, and to learn what happened to these groups over tens of millions of years that led to the diversity we see today,” Bernstein says in a press release.

Specifically, the authors intended to analyze the DNA of Hydrablabes periops, the olive small-eyed snake, to classify the species in a specific family. Implementing their new approach, they found that the snake fits in the Natricidae, a family that includes the North American garter snake. “Knowing that a particular species is part of a certain group can tell us a lot about biogeography and about how life on Earth has changed over time,” Ruane says in a press release.

Overall, the researchers stress the value and significance of these specimens for future studies. “This project underscores the importance of museum collections, because you never know what you’ll be able to learn from specimens in the future,” Ruane says in a press release.