A Nearby Supernova May Have Caused a Mass Extinction 2.6 Million Years Ago 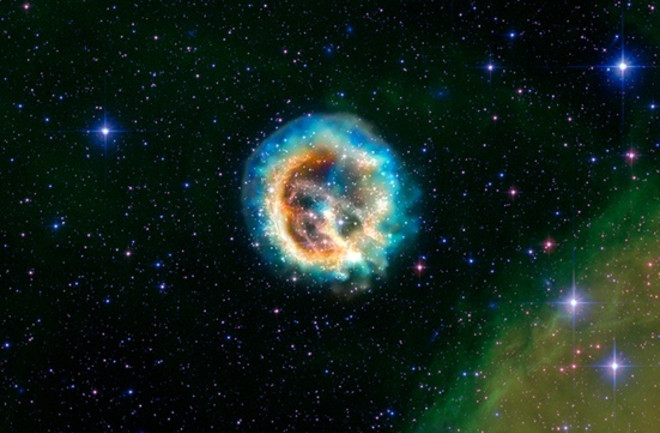 This composite image shows supernova remnant 1E 0102.2-7219, which lies 190,000 light-years away. The supernova that may have caused a mass extinction on Earth was much closer, only about 150 light-years distant.X-ray (NASA/CXC/MIT/D.Dewey et al. & NASA/CXC/SAO/J.DePasquale); Optical (NASA/STScI)

Supernovae are the explosive end stages of massive stars. About 2.6 million years ago, one such supernova lit up Earth’s sky from about 150 light-years away. A few hundred years later, after the new star had long since faded from the sky, cosmic rays from the event finally reached Earth, slamming into our planet. Now, a group of researchers led by Adrian Melott at the University of Kansas believes this cosmic onslaught is linked to a mass extinction of ocean animals roaming Earth’s waters at the time — including the Megalodon. Their work was published November 27 in Astrobiology.

“Supernovae should have affected Earth at some time or another,” Melott said in a press release. However, in the past, it’s been hard to determine exactly how or when such events would have had an effect. But, according to the group’s paper, “a newly documented marine megafaunal extinction” lines up with the arrival of a potentially lethal influx of radiation, indicating they might be able to pin a particular supernova on a particular event.

That event, which occurred at the Pliocene-Pleistocene boundary, caused about 36 percent of the genera in coastal waters — where the penetration of radiation would have been greater in the shallower water — to go extinct. “We have evidence of nearby [supernova] events at a specific time. We know about how far away they were, so we can actually compute how that would have affected Earth and compare it to what we know about what happened at that time,” Melott said.

Our Local Bubble is of a bubble of hot, diffuse gas that was likely generated by one or more supernovae.NASA; modified from original version by Wikipedia User Geni

Our Local Bubble is of a bubble of hot, diffuse gas that was likely generated by one or more supernovae. NASA; modified from original version by Wikipedia User Geni

The killer radiation came in the form of cosmic rays made up of fast-moving muons, which are a few hundred times the mass of an electron, according to Melott. “They’re very penetrating. Even normally, there are lots of them passing through us. Nearly all of them pass through harmlessly, yet about one-fifth of our radiation dose comes by muons,” he said.

But what about under abnormal conditions, such as the wave of material from a supernova? “When this wave of cosmic rays hits, multiply those muons by a few hundred. Only a small fraction of them will interact in any way, but when the number is so large and their energy so high, you get increased mutations and cancer,” Melott said. Based on the rates of muons hitting Earth from the stellar explosion, the team estimated that in human-sized animals, the cancer rate would increase by about 50 percent. But in larger animals, that effect would have also been larger. “For an elephant or a whale, the radiation dose goes way up,” he said. And because high-energy muons can penetrate hundreds of yards into water, they could have peppered the coastal waters where the extinctions occurred, essentially targeting the animals that lived there for death.

The other piece of the puzzle was pinpointing the event that could have caused that wave of radiation. Iron-60 is a radioactive isotope of iron with a half-life of about 2.6 million years — which means that any iron-60 that formed with Earth is now long gone. Thus, the only way scientists could still find iron-60 today is if it arrived via cosmic means, such as “raining down” in the wave from a supernova. And there’s a huge spike of iron-60 that was deposited about 2.6 million years ago, indicating the material from a supernova event reached us then.

As for where that supernova came from, our Sun sits inside what astronomers call the Local Bubble. It’s a relatively empty area of the interstellar medium (ISM) that fills the space between stars. The Local Bubble is a 300-light-year-wide region filled with hot, diffuse gas, bounded by the cold, dense gas of the “regular” ISM. In our region of the galaxy, several bubbles exist, and astronomers think these bubbles — including our own — were caused by supernovae, whose energy can sweep away material and heat anything that remains, forming just such a bubble.

The Local Bubble may have been caused by not one, but a chain of supernovae, one of which went off extremely close to Earth 2.6 million years ago, depositing that layer of radioactive material. And the Local Bubble itself could have exacerbated the amount of cosmic rays Earth received, increasing the deadliness of such events. According to Melott, the boundaries of the bubble could have reflected cosmic rays back when they hit it, creating a “cosmic-ray bath” lasting 10,000–100,000 years for each supernova. A chain of supernovae going off relatively close to each other in time could send cosmic rays bouncing throughout the Local Bubble for millions of years, he said.

All of this boils down to a tantalizing connection between the supernovae that clearly changed our local region of the galaxy and an unexplained major extinction event. “There really hasn’t been any good explanation for the marine megafaunal extinction,” Melott concluded. “This could be one.”