A Mission To Boldly Go To Uranus And Neptune 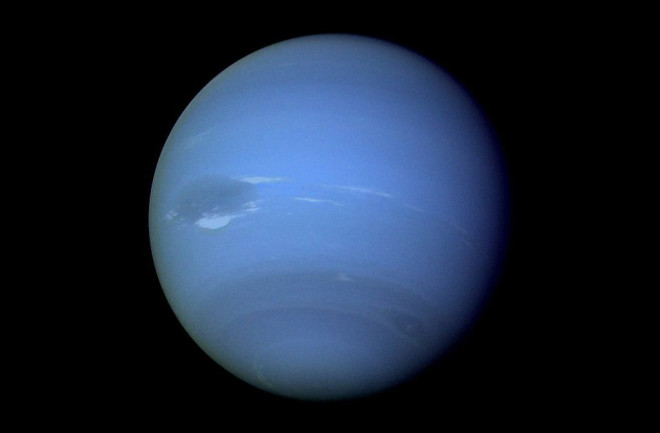 A Voyager 2 image of Neptune, captured 4.4 million miles from the planet. (Credit: NASA/JPL)

Uranus and Neptune, the seventh and eighth planets, are largely a mystery — but that could change within the next two decades.

A study submitted to Arxiv by Amy Simon and Mark Hoffstadter, NASA veterans and experts on those planets, and Alan Stern, the principal investigator of the New Horizons mission, outlines a cost-effective plan to explore those planets — and maybe even visit a few new places on the way out.

The white paper, the end result of a working group setting their sites on Uranus and Neptune, calls for two separate crafts. One, a flyby mission of Uranus, would sweep within the magnetic field of the seventh planet, detailing its strange polar arrangement that sees the planet essentially rotating on its side, causing the magnetic fields to turn on and off as if someone were operating a light switch haphazardly in the interior. It might also drop an atmospheric probe into Uranus, detailing its interior. After the flyby, it would set a course for a giant dwarf planet, and visit a few other small bodies in the outer solar system region known as the Kuiper Belt.

The other mission would arrive at Neptune and enter orbit, detailing the planet itself, as well as its interactions with its largest moon, Triton. Triton is likely the largest surviving Kuiper Belt body, but it was captured long ago by Neptune. Triton would get more than a few glances, as it’s a geologically active body that spits out liquid geysers likely powered by an ocean below.

White papers are typically the first step in a mission becoming a reality — a sort of proposal that will hopefully snowball into something bigger. As such, they haven’t settled on things like instruments, launch vehicles, and other practicalities. But with a decadal survey — which helps set some of the exploration priorities — coming up, it’s high time we delve into exploring these planets. “We’re still thinking about it. We’re still pushing forward. We want to do something to get out there to Uranus and Neptune,” Simon says.

Both planets were visited just once by the Voyager 2 craft, which flew by Uranus in 1986 and Neptune in 1989 before heading out to what were then parts unknown. While a second flyby of Uranus may seem silly, the trio wanted to give a good cost cap of around $3.5 billion for both that would ensure their success. And with new technologies, “you want to fill in some of the gaps with some of the instruments we didn’t have last time,” Simon says.

Ever since, scientists have tried to understand these worlds using Voyager data, ground based observatories and Hubble Space Telescope. Unlike Jupiter and Saturn, which are gas giants dominated by hydrogen and helium, Uranus and Neptune fall somewhere in between those worlds and Earth-like terrestrial planets. The pair are dominated by water instead of lighter elements. That water is at such incredible depths that it does a sort of hot freeze into an exotic solid form — giving rise to the name “ice giants.”

“They’re really so different,” Simon says, which makes them a key component in understanding the formation of planets. And, based on studies of exoplanets, astronomers think Neptune-sized worlds may even be among the most abundant in the universe.

As for the dwarf planet phase of the Uranus mission, the group believes that if you swept through Uranus just right, you could get to two dwarf planets, Orcus and Veruna, with little to no extra fuel needed. Even the worlds Sedna, Makemake, and Haumea could require just a small amount of fuel for a flyby. The craft could then pick out a few other small targets on its trajectory out of the solar system. “The idea is to get to a big one and some small ones,” Simon says.

Outer solar system research has been hampered by one big impediment — power. Out past Jupiter, the Sun doesn’t really shine big enough to allow solar panels. So NASA missions have used radioactive batteries called radiothermal gradients, or RTGs, to power their craft. But the production of the chief fuel source of these power sources, plutonium-238, has only just resumed thanks to exemptions to international nuclear proliferation treaties.

By the time the craft are online, new RTGs—including some using more efficient fuel sources should be ready to go. And if the Voyager program is any indication, those craft can go a long, long time. Voyager and the Mars Viking lander programs both used reprogrammable computers for the first time, allowing ground control to shut off instruments to conserve power. New computers and lower power instruments could well help keep the lights on longer and longer.

“It’s just a matter of how power hungry your instruments are, and ours are probably less power hungry than those on Cassini and definitely far less than those aboard the Voyager,” Simon says.

These proposed missions to Uranus and Neptune would launch in the late 2020s or early 2030s, though details like launch vehicle, launch dates, and arrival dates are a big TBD. It also may not get approved in the end. It’s just one of a large number of white papers out there, all vying for the chance to see the light of day. “That’s really what we’re going to need for the decadal — as many options as possible,” Simon says.

But Neptune and Uranus are big, big targets for future exploration — so this mission, or something like it, may yet see the light of day.