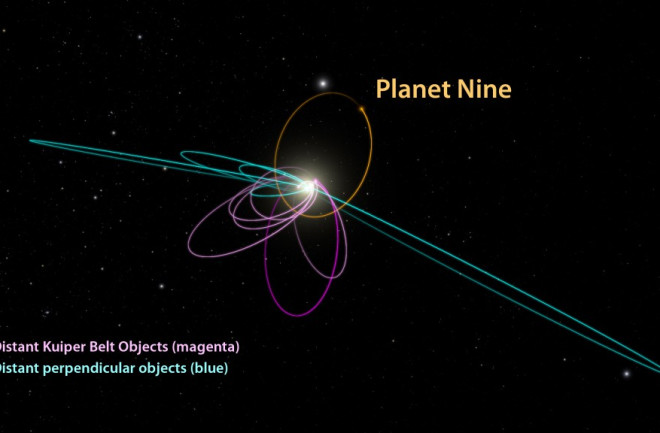 Planet 9 from Outer Space: The peculiar alignment and tilt of the six most distant objects in the solar system hint at the presence of an unseen massive planet orbiting far beyond Pluto. (Credit: Caltech/R. Hurt/IPAC)

By now you’ve probably heard the announcement that astronomers Konstantin Batygin and Mike Brown think they’ve tracked down “Planet 9,” a long-rumored large world orbiting in the distant wilderness of the solar system. Even if you haven’t heard, the news may sound familiar, since a confusingly similar but completely separate report made the rounds just a month ago. (Students of history will recall that Planet X stories also circulated in 2014 and 2006, and have been a staple of the astronomy hype machine all the way back to the discovery of Ceres in 1801.)

The dreary truth is that the Batygin and Brown claim, while stronger than the ones that came before, is still soaked in uncertainty. But there’s another truth, far more exciting, that goes with it: The latest efforts to find Planet X are hugely revealing, even if these particular ones don’t hold up.

Reason #1: The competing claims starkly illustrate the difference between seeing and believing. The case for Planet 9 is much stronger than for the ones described in December, even though researchers have directly observed the earlier objects but have not seen Planet 9 at all. Better yet is reason #2: These stories keep popping up because overwhelming majority of the solar system is cloaked in darkness, and is just now coming into view. Even the latest maybe-planets turn out not to exist, it’s nearly certain that there are big, exotic things out beyond Pluto waiting to be found.

On the Trail of Planet 9

Since they haven’t been able to observe Planet 9 directly, Batygin and Brown have attempted to find it by following its gravitational shadow. There is a long and noble tradition of sleuthing out invisible objects by the way they pull at other, visible ones. In 1846, French mathematician Urbain Le Verrier deduced the existence of Neptune from deviations in the orbit of Uranus; Le Verrier concluded, correctly, that a then-unknown planet was responsible for the anomaly. Over the past two decades, astronomers have discovered hundreds of distant planets the same way, by noting how they pull on their parent stars. On the cosmic level, much of the evidence for dark matter in the universe comes from tracing its gravitational influence on bright galaxies.

Planet 9 appears to have left its gravitational mark by scrambling the orbits of other, smaller bodies in the Kuiper Belt–the loose swarm of frozen objects (including Pluto) that orbit in the vast, distant zone beyond Neptune. My colleague Ethan Siegel very ably explains Batygin and Brown’s gravitational deductive process here; the research paper is here.

Some breathless media reports notwithstanding, the evidence for Planet 9 is far from airtight, though it certainly is intriguing. If the planet real, it must be big, at least 10 times the mass of Earth, and would follow a huge looping orbit. Even at its closest point, it would lie perhaps five times as far from the sun as Pluto. It would be quite unlike anything else known in the solar system.

There is a contentious question hanging about what to call such an object. In their paper, Batygin and Brown pointedly refer to it as a planet, but the current definition of planet—the one that got Pluto kicked out of the club—requires that an object must have “has cleared the neighbourhood around its orbit” in the solar system. It is not clear that Planet 9 would meet that standard, despite Brown’s confident statements to the contrary. (Irony alert: Mike Brown is the same astronomer who discovered Eris, the large Kuiper Belt object that prompted the new planetary definition and the demotion of Pluto. His Twitter handle is @plutokiller.)

ALMA--an array of 66 dishes in the Chilean Andes--is hugely sensitive to long-wave radiation from cool objects. One of those objects might (just maybe) be a new distant planet. (Credit: ESO/B. Tafreshi)

ALMA–an array of 66 dishes in the Chilean Andes–is hugely sensitive to long-wave radiation from cool objects. One of those objects might (just maybe) be a new distant planet. (Credit: ESO/B. Tafreshi)

The observational evidence for those other planets comes from ALMA, a powerful radio telescope array recently constructed in the Atacama desert of Chile. A large planet in the far outer reaches of the solar system would reflect exceedingly little light, but it would retain some heat from the time of its formation. Such heat would cause the planet to radiate, just a little, at millimeter-wave frequencies (between radio and microwave). That is the planetary emission Wouter Vlemmings of Sweden’s Chalmers University of Technology thinks he might have detected—not just once, but in two different directions. For simplicity I’ll call these sightings Planet 10 and Planet 11, though I should be clear that the researchers did not use those terms.

Actually, what Vlemmings and his colleagues have seen is an unexplained blip that showed up in one spot, then in another, over two pairs of observation. The simplest explanation, they say, is that they caught two solar-system objects passing through ALMA’s field of view. This interpretation comes with a boatload of caveats. The blips could be transient sources that switched on and off. The odds of making two amazing detections by pure chance are, er, astronomical. And ALMA is a new instrument; the blips might simply be imaging artifacts that the researchers do not yet understand. Even if they are real, the ALMA data cannot readily distinguish between a small, nearby body and a large, distant one.

What scientists need are multiple sightings, tracking the blips and proving that they move like real planets (or perhaps like something else entirely; that would be exciting, too). ALMA, with its small field of view and full observing schedule, is not well equipped to do that. For now, Planets 10 and 11 are stuck in limbo; they are intriguing anomalies and nothing more. You can explore the technical papers for yourself, here and here.

Fortunately, this is not where the story ends. If Planet 9 is real, it should be possible to observe it directly. It won’t be easy, since the planet’s inferred size and distance mean it would be extremely faint (10,000 times fainter than Pluto, give or take) and moving very slowly among a vast number of similarly dim stars. Nevertheless, giant telescopes like the Subaru in Hawaii could potentially find it.

Batygin and Brown are already looking, and others are about to join the search. In principle, ALMA could continue scanning for the more-improbable Planets 10 and 11. If another suspicious blip shows up, that too would merit related visible-light searches. In the meantime, ALMA is making all kinds of other stunning discoveries about stars and galaxies.

The Solar System’s Next Frontier

An especially exciting tool for exploring the outer reaches of the solar system is the upcoming Large Synoptic Survey Telescope, or LSST. Ignore the ominous-sounding name and think about it this way: It is an HD movie camera filming a reality show about the whole universe. Unlike other giant telescopes–Subaru included–that typically focus in on one small region at a time, the LSST will scan the whole sky every few days. If anything flashes, LSST will see it. If anything moves, LSST will see it.

Real-time observations of the ultra-faint sky will revolutionize astronomers’ ability to scan the dim outer reaches of the solar system. Nobody knows what we will find out there. But it is a 100% safe bet that we will find a lot, very likely including objects that don’t resemble any we’ve seen before, because we are entering uncharted territory. All of the major planets like within 30 Earth distances from the sun. (One sun-Earth distance is known as an astronomical unit, or AU; it’s a standard bit of astronomy jargon.) The Kuiper Belt extends out to about 50 AU. But the gravitational influence of the sun extends out to about 100,000 AU. That’s a hell of a lot of unexplored space!

The four zones of the solar system include a staggering amount of unexplored space--almost everything beyond Pluto is barely known. (Credit: M. Brown/Caltech/R.Hurt/C.Powell)

The four zones of the solar system include a staggering amount of unexplored space–almost everything beyond Pluto is barely known. (Credit: M. Brown/Caltech/R.Hurt/C.Powell)

Astronomers have only a vague sense of what lies out there. Some 4.5 billions of years ago, the gravitational chaos from the giant planets threw trillions of small icy bodies into that distant zone. Some ended up in a zone called the “scattered disk,” similar to the Kuiper Belt but bigger and less stable; some ended up in the Oort Cloud, a humongous reservoir of dormant comets believed to stretch nearly halfway to the next star.

Larger bodies probably got tossed out as well: planetary cores, ejected moons, all kinds of unstable flotsam from the solar system’s traumatic birth. Planet 9, if it’s real, might be a survivor from that chaotic era. (See my full account of the early chaos here.) Sizable objects, perhaps the size of the moon or Mars, might also have formed in situ beyond the Kuiper Belt.

Computer models show that the far outer solar system must be rich with scattered objects. We know for sure that a lot of stuff is floating around out there because we see traces of it on a regular basis: When objects from the scattered disk or Oort Cloud get disturbed, they plunge toward the sun and show up as comets. But comets are just a small (and perhaps very skewed) sampling of the whole mysterious population out there.

I hope astronomers find Planet 9, but I’m not terribly worried if they don’t. Planet 9 may not exist, but countless other exotic denizens of the outer-outer solar system undoubtedly do. They are real, and when we finally see them, they will be spectacular.