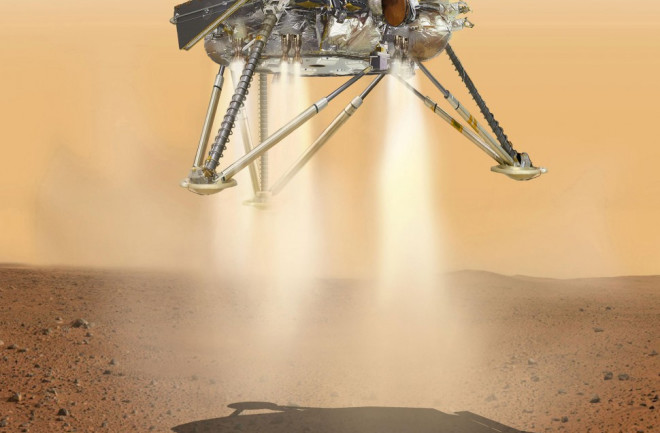 Mars Insight will touch down on November 26. (Credit: NASA/JPL-Caltech)

On November 26th, NASA’s Insight mission will land on Mars. That’s the plan anyway. Something like half of all Mars missions have failed, usually well before they approached the Red Planet, either because of launch failure or some error on its outward trip. While space agencies’ records have improved, especially over the last decade, Mars is littered with spacecraft that didn’t quite stick the landing — or, in some cases, orbital insertion. Here are some of the highlights.

Mars 3 sent back this first -- and its only -- image of Mars' surface. What it saw is anyone's guess. (Credit: Soviet Academy of Sciences)

Mars 3 sent back this first — and its only — image of Mars’ surface. What it saw is anyone’s guess. (Credit: Soviet Academy of Sciences)

The Soviet Mars 2 holds the dubious honor of being the first manmade object to touch Mars. But it did so more roughly than intended. Mars 2 entered the Red Planet’s atmosphere a bit too steeply, likely causing a cascade of bad signals that meant it never released its parachute. The craft plummeted to the ground, and was presumed destroyed. It never made contact with its engineers.

Its sister lander, Mars 3, did make it to the surface in a controlled landing, even navigating through an intense dust storm on its way down. However, the craft only operated for 20 seconds before falling silent, sending back just one uninterpretable image. Still, a win is a win.

Perhaps the most infamous failure is the Mars Climate Orbiter’s destruction in 1999. The issue wasn’t even all that technical: One team used English units such as pounds and feet while the rest of the engineers used metric. The real problem is that no one noticed until the spacecraft shot far too close to the planet, burning up in an atmosphere it was never supposed to enter. It remains one of NASA’s more embarrassing mistakes — not least because at least two engineers did notice the discrepancy, and the problem still didn’t get fixed. It was an error that cost a cool $193 million.

Beagle 2 (left) should have unfolded as seen above. Images from NASA's Mars Reconnaissance Orbiter (right) show that instead only a few of its solar panels unfolded as planned. (Credit: NASA-JPL)

Beagle 2 (left) should have unfolded as seen above. Images from NASA’s Mars Reconnaissance Orbiter (right) show that instead only a few of its solar panels unfolded as planned. (Credit: NASA-JPL)

In 2003, the European Space Agency successfully piloted Mars Express into orbit around the Red Planet. In December of that year, the orbiter released its lander component, Beagle 2, for a Christmas Day touchdown. The lander went out of radio contact, and was never heard from again. Scientists assumed the lander had crashed, though they hadn’t received any sign of malfunction.

Then, in 2016, researchers looking over martian satellite photography found the crash site — which wasn’t a crash at all. It turned out the lander had settled, to all appearances, quite gently onto the martian terrain. Its deployed parachute is even visible in some imagery. The problem was its solar arrays, one of which didn’t unfold correctly, leaving the lander unable to send signals back to Earth. Beagle 2 was ultimately tantalizingly close to success, while still completely failing its mission objective.

ESA’s bad luck continued. In 2016, they again succeeded in getting a spacecraft into orbit — this time the Trace Gas Orbiter. Again it released a lander, Schiaparelli. This time, the landing module kept in constant contact with its orbiting partner so that scientists would have a better record of the craft’s descent. This meant they were fully informed when the lander slammed into the Red Planet at 340 mph.

Schiaparelli’s sensors overloaded during a turbulent descent, causing the spacecraft to think it was underground when it was actually still a few miles in the air. In sort-of-rational response, the craft ejected its parachute and only fired its landing thrusters for a few seconds, assuming it was at ground level. It was not. The lander plummeted the rest of the way to the ground. But hey, at least this time engineers knew what had happened.

The Mars Polar Lander combined both of these problems back in 1999. It was not monitored as it descended, meaning engineers had to offer their best guesses later as to what went wrong. A year later, looking over their equipment, they realized that it was almost certainly the false signals the landing gear sent telling the lander it was on the ground and could stop firing its brakes when it very much was not, and should not. The testing prototype was wired differently and hadn’t experienced this problem, but the one they sent to Mars apparently did.

Adding insult to injury, the Deep Space 2 probes that NASA sent along with the lander also failed — and their job was to crash into the surface, and then report back. The lander’s mother craft dropped off the tiny probes before its own troubles started, and the DS2 probes seemed to release without incident. But they never checked in, leaving engineers to assume that they were not, in fact, capable of surviving the impact they had been designed to undergo.

These are the failures, but Mars has plenty of successes too, especially in recent years. It sounds flip, but space engineers are serious when they say that Mars is hard. It has more gravity than the moon, less atmosphere than Earth to fill parachutes, and it’s far enough away that the maneuvers must be done on autopilot.

Luckily, space agencies have been getting better and better, and we’ve come up with some cool tricks: inflatable cushions, braking thrusters, and sky cranes. That’s good, because we’ve still got big plans for our neighboring planet.