A Giant Cave on the Moon Could Host Lunar Settlers 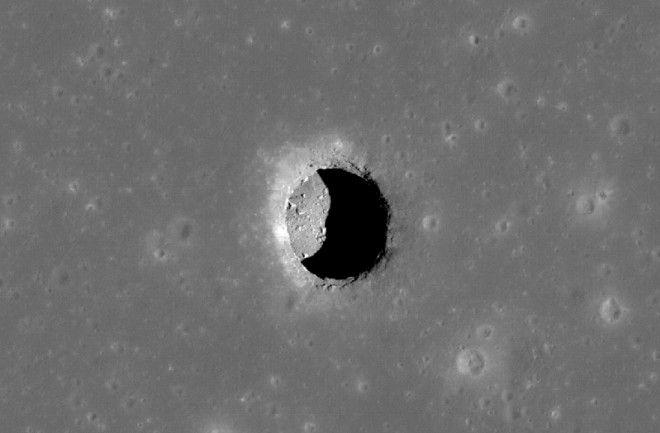 A pit on the moon's surface. (Credit: NASA/Goddard/Arizona State University)

Turn-of-the-century science fiction posited the existence of aliens living deep beneath the surface of the moon.

Someday, those subterranean creatures could very well be us.

New data from the Japan Aerospace Exploration Agency (JAXA) has uncovered a 30-mile-long tunnel under the moon’s surface, likely the relic of long-ago lava flows. Though the existence of lava tubes isn’t something new, this latest find appears to be both mostly intact and sufficiently large enough to potentially serve as a habitat for future lunar settlers.

According to radar data from the agency’s SELENE lunar orbiter, published Thursday in Geophysical Research Letters, the chasm is less than 330 feet beneath the surface and around 300 feet wide—dimensions that could comfortably house inhabitants. Other lava tubes were hinted at by the presence of “skylights,” or areas where the roof of the tube has collapsed, exposing it to the surface above. It’s not yet known how many such skylights exist for this cave.

Lava tubes formed billions of years ago when the moon was still geologically active and molten rock gushed from beneath the surface. Vast lava plains today still mark the moon’s surface, and tunneling through them are channels where lava once ran. In some cases, the lava subsided, leaving a hollow chamber behind. These are similar to the lava tubes found on Earth, and many still exist on the moon.

In fact, the moon’s lower gravity means that the tubes are potentially much larger than on Earth, as they won’t collapse under their own weight as easily. Research in 2015 reported that tubes up to three miles wide could theoretically be possible on the moon, large enough to hold a moderately-sized city.

Caverns tucked into bedrock offer a few key protections for humans living in space. They provide crucial cover from harmful radiation given off by the sun and other cosmic sources, something that Earth’s magnetic field takes care of here. The surrounding rock also serves as an insulator against temperature swings that take the moon’s surface from hot enough to boil water to less than -200 degrees Fahrenheit in the course of a single day. Finally, it also offers some protection from the small meteorites that periodically bombard the moon, although larger collisions are still a worry.

The prospect of housing astronauts beneath the surface on other planets has been brought up before, such as in 2014 when a NASA probe got hints of lava tubes beneath the moon’s surface. Both China and Russia have announced plans to put a colony on the moon in the next few decades, and the US could be ramping up to make a return there as well. A lunar base would be a convenient staging point for longer missions to Mars and beyond, in addition to an important proof-of-concept for living on other worlds.

There are still a few challenges to be worked out though, most pressing of which is the question of supplies. Constantly shuttling food and water to the moon would be difficult, so settlers would need their own sources of sustenance. The moon likely contains water ice which could be converted into drinking water and even fuel, but food production would require off-world agriculture. There are a few models for this, based largely on hydroponics, but it’s a task that hasn’t been seriously attempted yet.

Nevertheless, if we manage to seal off a lunar cave, as some have suggested, by installing thick glass or metal shields across any openings and pump it full of air, it could be possible. A system of mirrors could funnel sunlight down below, and lunar settlers could live and farm relatively comfortably. The same idea could work on Mars as well; the Red Planet also has caves, in addition to water ice reserves.

Cave by cave, humanity could spread across the solar system.